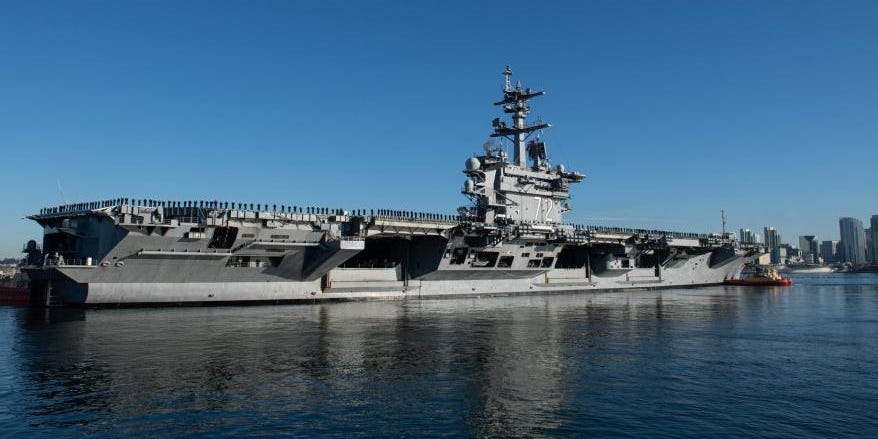 Nuclear-powered aircraft carrier USS Abraham Lincoln made history Monday when it set sail from San Diego, becoming the first US Navy carrier to deploy under the leadership of a female commanding officer.

Prior to taking command of the Lincoln last year, Bauernschmidt served as the commanding officer of the amphibious transport dock USS San Diego. She was previously the Lincoln’s executive officer and the first woman to serve as the second-in-command on a carrier. When she took command of the Lincoln last summer, Bauernschmidt said in a statement that “there is no more humbling sense of responsibility than to know you are entrusted with the care of the people who have chosen to protect our nation.”

The Lincoln left San Diego Monday for a regular deployment as part of the Carrier Strike Group 3, which also included one guided-missile cruiser and four guided-missile destroyers.

The Lincoln is, however, not the first carrier to deploy with the F-35C. USS Carl Vinson deployed with the “Argonauts” of Strike Fighter Squadron 147 last August, becoming the first Navy carrier to sail with an integrated air wing consisting of both fourth- and fifth-generation fighters. Insider previously talked to one of the Marine F-35C pilots of VMFA 314. The pilot, Maj. Mark Dion, said that “the jet brings a lot of capability to the Marine Corps and to the Navy” and “just makes the carrier much more lethal.”

In its statement on the Lincoln’s deployment, the Navy said that “the Navy’s next iteration of the Carrier Air Wing will be more lethal and survivable in today’s contested battle space, and well into the future.”

The Abraham Lincoln carrier strike group began preparing for this deployment last April and recently completed a month-long exercise to certify the strike group ahead of its deployment.

The Navy did not provide any details on the CSG’s deployment, only saying that it is in “support of global maritime security operations.”