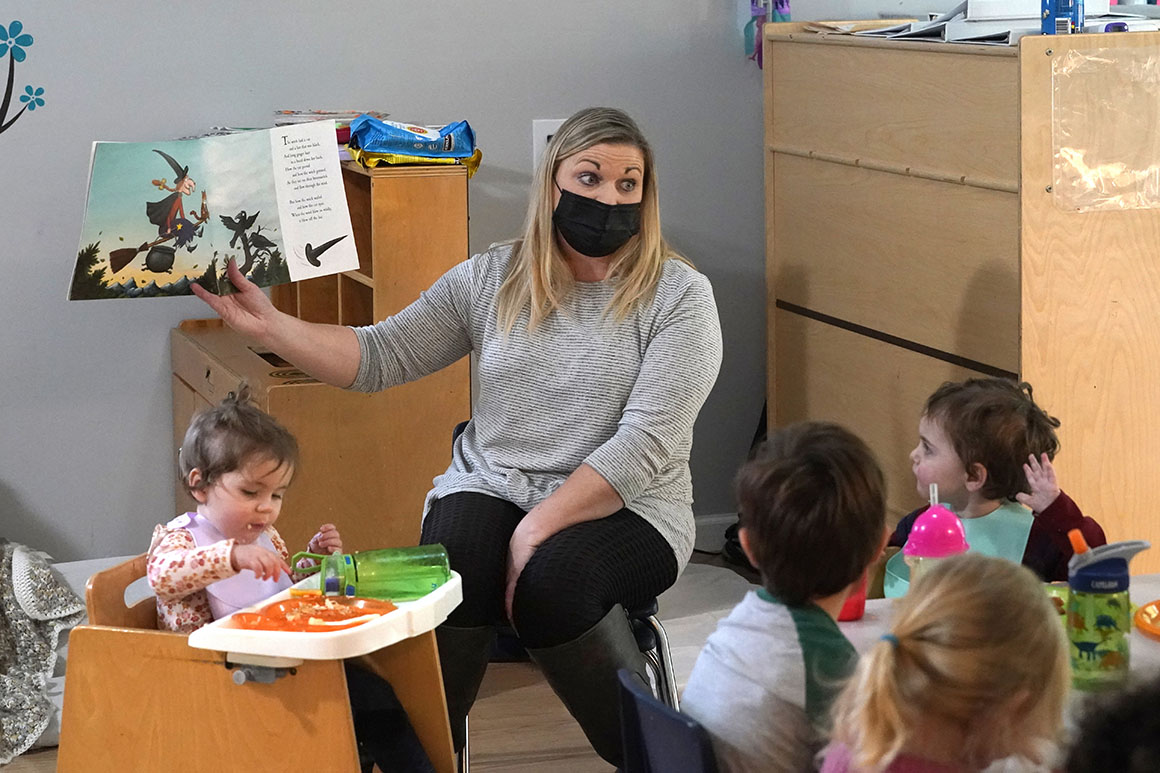 As Omicron threatens to shut down schools and shutter businesses, economists fear the new coronavirus variant could set working women back even further as they struggle to recover jobs lost during the first wave of the pandemic.

Another blow risks causing long-lasting damage, including setting back efforts to close their pay gap with men.

Unexpected school closures and reinstated lockdowns, on top of a crippled child care industry, could reverse what progress women have made since the pandemic abated earlier this year. Not only are women more likely to shoulder most caregiving responsibilities in their households, but their jobs are highly concentrated in the businesses most vulnerable to restrictions and accompanying job losses.

“We see a ‘two steps forward, one step back’ kind of trend” with “every wave of Covid that comes, where women make some inroads over the summer, or in between waves of Covid,” Alicia Sasser Modestino, an economics professor at Northeastern University, said. “And then the next stretch of rubber hitting the road puts the brakes on that.”

As of November, women accounted for more than 62 percent of the pandemic-related employment gap U.S. — the difference between current employment levels and what they would have been if the pandemic hadn’t happened, according to an analysis of unpublished BLS numbers by Heritage Foundation economist Rachel Greszler.

That gap began to narrow around March, Greszler said. But then, “it started to decline or at least flattened out while men’s continued to improve.”

Democrats have pointed to the so-called shecession as a reason to pass their $1.7 trillion social spending package, which includes billions for paid leave, child care and more. But the bulk of the help wouldn’t come in time for the women who need it most. And that’s if they can clear it: Sen. Joe Manchin (D-W.Va.), whose vote is critical to enactment, said recently that he could not support the legislation in its current form.

“We’re building back better with women,” Democratic Women’s Caucus Chair Lois Frankel (D-Fla.) said, alluding to the title of President Joe Biden’s stalled plan. “The infrastructure bill, which we passed, which is fabulous — I’ve only got good things to say about it — most of those jobs are going to go to men.”

“Build Back Better has the jobs for the women.”

If women’s employment continues to lag, economists warn that it could widen the gender pay gap. Some women will have been out of the workforce so long they will have difficulty catching up.

Though the pay gap held mostly steady in 2020, men’s wages have this year grown faster than women’s. Weekly median earnings for women increased by 1.8 percent between the first and third quarter of 2021, according to a POLITICO analysis of BLS data, while men’s grew by 2.3 percent.

Gaps on women’s resumes could, in the long run, aggravate the problem, economists warn.

“There is going to be some permanent scarring to the pandemic,” Kathryn Edwards, an economist at the RAND Corporation, said. “That’s going to be true for men as well as women, but women are just more adversely affected because of their occupation and their childcare.”

The fact that women earn less than men — 84 percent of what their male counterparts make, according to Pew Research Center — means that if one parent has to leave work to care for a child, it likely makes most financial sense for it to be the woman.

Time out of the workforce aside, more women may also wind up working remotely, particularly if Omicron prompts another round of school and workplace shutdowns, Sasser Modestino said, which could deprive them of in-person opportunities and become “a really large limiting factor going forward in terms of women’s advancement.”

“There’s actually larger hidden costs that we have not even yet documented in the sense of not just women taking more time out of the labor market,” but in “the longer term,” Sasser Modestino said. “Because even as this moves from pandemic to endemic, it’s gone on so long, we really have changed the way that work is done.”

“There’s a second class citizenry that is developing in terms of the folks who are not going to be in person, and that’s largely going to be women,” she added. “That means you’re going to be missing out on those literal water cooler conversations about: Where’s the next promotion? Where’s the next opportunity?”

If Congress enacts some form of Build Back Better that includes investments in care, women won’t be able to reap most benefits for years — let alone in time to soften Omicron’s blow. The child care industry must be scaled up, and a paid leave program — if it’s included — would need to be built from scratch.

But it would address some of the structural inequities that caused the pandemic to hit women so hard, supporters say.

“The hope is that we shore it up in the long run so if something like this happens again, we won’t be in the same situation,” Elise Gould, an economist at the liberal-leaning Economic Policy Institute, said. “The pandemic only worsened the outcomes of what’s already in existence.”