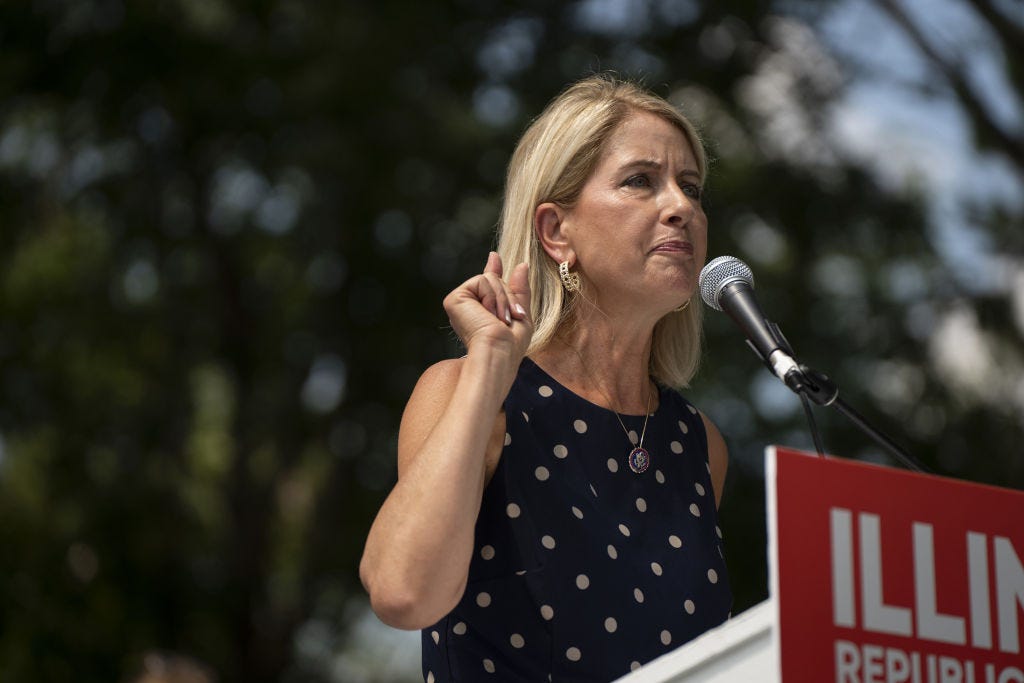 Republican Rep. Mary Miller of Illinois on Saturday announced that she will run for the House in the newly-drawn 15th Congressional District, choosing to challenge primary incumbent GOP Rep. Rodney Davis with the backing of the most prominent Republican in the country — former President Donald Trump.

In the aftermath of the 2020 Census, Illinois lost a congressional seat — and with Democrats in control of the Governor’s Mansion and the state legislature — lawmakers chose to divide Miller’s district between neighboring districts in the redistricting process.

Miller, who was first elected to Congress in November 2020, is choosing to run in Davis’ district instead of challenging Republican Rep. Mike Bost in the new 12th Congressional District.

Both Davis and Bost have solid Republican credentials, but Miller, a member of the ultraconservative Freedom Caucus, has pledged to run her campaign as a staunch ally of Trump and his agenda.

Last month, controversial Rep. Marjorie Taylor Greene of Georgia encouraged Trump to support Miller’s campaign, despite pleas from House Minority Leader Kevin McCarthy for the former president to stay out of the race, according to CNN.

“I am blessed to start out 2022 by receiving President Donald Trump’s endorsement for my re-election in IL-15,” she tweeted on Saturday. “I promise to always be a fighter for the America First Agenda. This will be the year we take our country back.”

In a statement, the former president lauded Miller for her support of his agenda.

“Congresswoman Mary Miller is doing a fantastic job representing the people of Illinois! Strong on Election Security, the Second Amendment, and our Military and Vets, Mary is a champion of our America First agenda. She fights hard against Joe Biden’s open borders, runaway inflation, and the radical indoctrination of our children,” he said. “Mary has my Complete and Total Endorsement!”

The 15th district leans Republican, so whoever wins the primary will be favored to capture the district in the general election.

Democrats have been angling to defeat Miller for some time, especially after she made comments at a January 2021 “Save the Republic” rally seemingly praising the German dictator and Nazi leader Adolf Hitler.

“Each generation has the responsibility to teach and train the next generation,” she said at the event. “You know, if we win a few elections, we’re still going to be losing, unless we win the hearts and minds of our children. This is the battle.”

She continued: “Hitler was right on one thing: He said, ‘Whoever has the youth, has the future.’ Our children are being propagandized.”

After initially pushing back the outcry stemming from her comments, Miller backtracked and affirmed her support of Israel.

“I sincerely apologize for any harm my words caused and regret using a reference to one of the most evil dictators in history to illustrate the dangers that outside influences can have on our youth,” she said in a statement. “While some are trying to intentionally twist my words into something antithetical to my beliefs, let me be clear: I’m passionately pro-Israel and I will always be a strong advocate and ally of the Jewish community.”

Davis was generally a supporter of Trump’s legislative agenda during the former president’s time in the White House.

However, the congressman voted to support the January 6 commission investigating the Capitol riot last year.

If Davis wins his primary and Republicans take back control of the House in the fall, he’d be poised to lead the House Administration Committee.