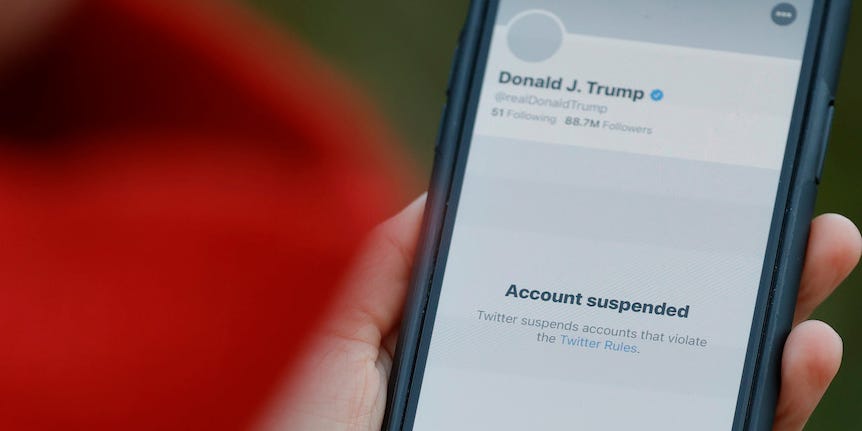 Former President Donald Trump on Monday slammed Twitter as a “disgrace to democracy” after it suspended Rep. Marjorie Taylor Greene, one of his most vocal supporters in Congress, for spreading misinformation about COVID-19.

“Twitter is a disgrace to democracy,” Trump said in a statement issued through his spokesperson, Liz Harrington, a day after Greene was banned.

“They shouldn’t be allowed to do business in this Country.”

He also criticized Facebook, from which he is also suspended, for banning Greene hours after Twitter did.

Trump’s successful run for president and his time in office were marked by his extensive use of a personal Twitter account, which had nearly 90 million followers before his ban.

On Twitter, he repeatedly attacked political opponents and, during his last weeks in office, repeatedly made baseless claims that the 2020 presidential election was rigged.

Since then he has repeatedly called the social media platform “really boring” and said the press releases he began issuing instead were “much more elegant.”

But his own attempts to get his account restored appear to betray his claim to be uninterested in the platform.

In a preliminary injunction, his lawyers said the suspension was unfair and arbitrary.

They wrote that Twitter “exercises a degree of power and control over political discourse in this country that is immeasurable, historically unprecedented, and profoundly dangerous to open democratic debate.”

The new venture has already hit a roadblock after federal regulators opened an investigation into the special purpose acquisition company (SPAC) backing the new platform.