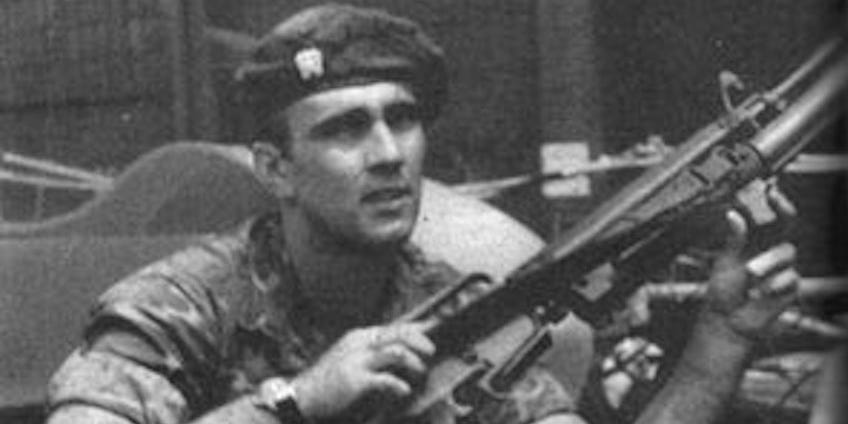 Richard Marcinko in an undated photo.

As a turbulent year ended, the Navy SEAL community lost one of its most influential and controversial members.

The famous Navy SEAL’s military career got off to a rough start. When a young Marcinko went to his local Marine Corps recruiting office to enlist, he was shown the door for not having a high-school diploma.

Seeing his natural leadership and promise, his superiors recommended Marcinko for the Navy’s Officer Candidate School, and soon he became an officer. He later deployed to Vietnam with SEAL Team Two. “Demo Dick,” as he became known, was highly decorated, earning the Silver Star, the third-highest award for valor under fire, and four Bronze Stars, as well as the Vietnamese Cross of Gallantry during his two combat tours in Vietnam.

The North Vietnamese so feared him that they put a bounty on his head.

After the Vietnam War, Marcinko was the commanding officer of SEAL Team Two from 1974 to 1976.

In that role, he started developing a counterterrorism capability for Naval Special Warfare. At the start, it was only a cell, known as “Mobility 6,” within SEAL Team Two.

But when the Iranian hostage crisis highlighted the need for a dedicated counterterrorism force, the Navy tasked Marcinko with developing an equivalent to the Army’s Delta Force. There were only two SEAL teams at the time, but Marcinko, a natural bluffer, chose to call the new unit SEAL Team Six to fool Soviet intelligence services into thinking there were several teams.

During the unit’s early days, Marcinko fired one of his junior officers. That’s not an uncommon occurrence, but it wasn’t the last the SEALs saw of that junior officer, who was named William McRaven.

Marcinko was successful in establishing the Navy’s counterterrorism unit, but his controversial ways soon clashed with Navy and SOCOM leadership. SEAL Team Six operators were effective but looked more like pirates than professional troops.

“Marcinko was really the first famous SEAL. He worked hard and partied hard. He carried his unconventional ways in anything he did, and he was largely successful if you look at it in hindsight,” a Navy SEAL operator, who was not authorized to speak to the press, told Insider.

“Some might say that he ‘poisoned’ the unit he created, but that was Dick. Whatever his vices, Dick Marcinko left his mark on SEAL history and shaped it like few others,” the SEAL said.

In 1983, Marcinko relinquished command of his unit and moved onto the “Red Cell,” a small unit designed to test and find vulnerabilities in some of the Pentagon’s most classified facilities.

Marcinko was “a team guy through and through” but earned a mixed reputation, a former Navy SEAL officer said. “On the one hand, he created Development Group [SEAL Team Six], but on the other hand he encouraged the wrong culture. We recently saw the ugly aspects of that culture all over the news.”

Controversy followed Marcinko out of the service. In 1989, he was accused of receiving $100,000 from an arms dealer in order to secure a contract with the Navy for hand grenades. The former frogman denied the charges but ended up serving 15 months of a 21-month sentence in federal prison.

Despite the blemishes on his record, Marcinko left a mark on the US special-operations community and is remembered by many as a visionary who knew how to play the system and deal with red tape.

“Whatever your opinion of him, the man was a leader, no question about it. He had that leadership aura that moves people to do things, to act. That’s natural leadership you can’t teach,” a former Navy SEAL officer told Insider. “Those few fortunate to have it immediately stand out.”