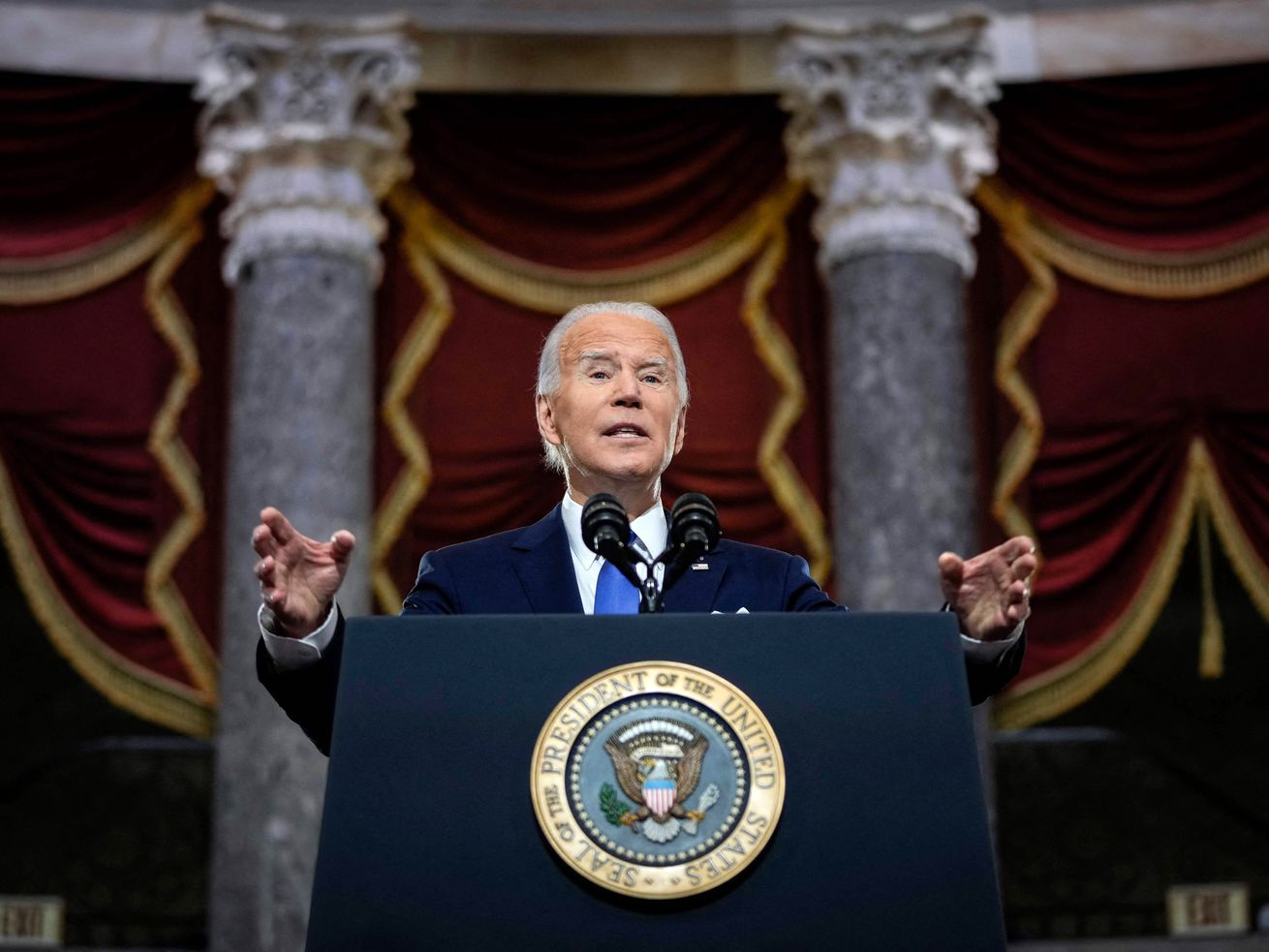 President Joe Biden speaks on January 6 to mark the anniversary of the attack on the Capitol in Washington, DC. | Drew Angerer/AFP via Getty Images

The president’s rhetoric on democracy is great. It’s the policy that’s the problem.

President Joe Biden’s speech on the anniversary of the January 6 Capitol insurrection was, as a matter of rhetoric, deeply moving. He reminded the country of the brutality of the attack, the absurdity of Donald Trump’s lies about the 2020 election, and the disturbing fact that American democracy remains in grave danger a year later.

“I did not seek this fight, brought to this Capitol one year ago today. But I will not shrink from it, either,” Biden said. “I will stand in this breach, I will defend this nation, and I will allow no one to place a dagger at the throat of democracy.”

The reviews were positive. “Biden hitting all the right notes here, and hitting them hard. A reminder of how powerful the Bully Pulpit can be,” Washington Post columnist Karen Tumulty tweeted. “Is anyone on the right listening?”

But it’s far from clear that the “bully pulpit” is powerful at all. Historically, there’s been little evidence that presidential speeches have advanced legislation or changed the opposing party’s or the public’s mind on major issues. More recently, we have had no shortage of speeches from Biden, Barack Obama, and other Democrats extolling democracy — yet Republicans, Senate moderates, and large swaths of the public remain unmoved.

If anything, Biden’s speech is a reminder of the hollowness, even futility, of his pro-democracy rhetoric. Facing a Republican opposition that’s closed ranks around Trump and a 50/50 Senate where pro-filibuster Democrats have veto power, there is only so much the president can do. Tellingly, the speech contained no new concrete policy proposals for protecting democracy from ongoing efforts to subvert it.

And in the areas where Biden has the power to act, like rallying Democrats to mount a response to state-level Republican attacks on democracy, he has been strikingly MIA.

“In the year since the attack on the Capitol, the Democratic Congress has methodically advanced legislation to safeguard our elections. Up to this point, the president has barely lifted a finger,” Ezra Levin, a co-founder of the pro-democracy activist group Indivisible, tells me (though Senate moderates’ unwillingness to abandon the filibuster has been the bigger barrier).

A year after the Capitol insurrection, American democracy remains in disrepair. Biden’s stirring defense of it only underscores how deep the damage runs — and how little has been done to fix it.

The limits of presidential rhetoric

Biden’s January 6 speech was the highlight of a series of events commemorating the one-year anniversary of the insurrection. And as a presidential address, it checked the boxes it needed to.

It had memorable turns of phrase, like “you can’t love your country only when you win.” It dismantled false claims of voter fraud and appropriately put blame on the institutional Republican Party. It made masterful use of detail against revisionist efforts on the right to recast the attackers as patriots — referring to “American flags on poles being used as weapons, as spears” and “the mob ransacking the Capitol … literally defecating in the hallways.”

But no speechwriter can rewrite political reality. And the audiences that Biden needs to persuade for Biden to make a difference — Republicans leaders, Democratic moderates, the general public — have reasons for taking the stances that they do.

The vast bulk of the institutional Republican Party is either viscerally pro-Trump or too afraid of crossing him to speak out. Those that do, like Reps. Liz Cheney (WY) and Pete Meijer (MI), have been punished with demotions and death threats. Nothing Biden can say seems to be able to break Trump’s stranglehold on the GOP rank and file and change the party’s political incentives.

Facing a nearly lockstep Republican opposition, Biden can only hope to pass pro-democracy legislation like the Freedom to Vote Act on a party-line vote. That means relying on Joe Manchin and Kyrsten Sinema, staunch filibuster defenders who have both proven willing to stand athwart Biden’s priorities. It seems a safe bet that another soaring tribute to democracy from the presidential podium won’t move the needle for them.

And the best evidence we have suggests the broader public will be similarly unmoved.

In general, partisans are more energized and angry when their party is out of power. There’s a reason the two biggest partisan movements in recent memory, the Tea Party and the #Resistance, rose in direct opposition to an incumbent president. Relatedly, polls consistently find that Democrats are less concerned about threats to American democracy than Republicans — a terrible irony given that baseless Republican beliefs about election fraud are the root cause of the most significant threats to democracy today.

Theda Skocpol, a professor at Harvard who studies social movements, points to an additional unique challenge for any Biden administration efforts to mobilize the public: Covid-19. Polarization around the pandemic has created a situation where Republicans have an easier time than Democrats getting the party faithful involved in politics, she posits.

“The reddest parts of the country, less vaccinated, have more illness, but do not accept limits on public activities, while the bluer areas, much more vaccinated, are still full of overly nervous people,” she tells me. “Capacities for group activities of all kinds have been undercut.”

Viewed through this lens, it makes sense that Biden has been unable to rally much grassroots enthusiasm around democracy — and a speech is unlikely to change that.

Biden could still do more

But there are things beyond speeches that Biden could be doing to prioritize shoring up American democracy.

In his first year, Biden made a deliberate choice to put his economic agenda — Covid relief, the bipartisan infrastructure package, and the omnibus Build Back Better social spending bill — at the top of the congressional docket, consuming the lion’s share of the White House’s lobbying and legislative effort.

You can agree or disagree with that as a matter of policy; Covid relief, in particular, seemed like an urgent matter. But it’s a choice that’s at least somewhat at odds with Biden’s framing of democracy in existential peril, under the greatest threat since the Civil War, due to Republican attempts to undermine its mechanics.

What’s more, there’s been no large-scale effort from the White House to organize a Democratic response to local attacks on democracy.

In his capacity as party leader, Biden could push the Democratic Party to take this mobilization seriously and mount its own response. So far, there’s little evidence that they’ve made much headway.

“The Democratic coalition is focused on normal coalition politics and governing, which is understandable in some ways but also neglects the gathering threat,” Dartmouth political scientist Brendan Nyhan told me in December. “Without cues from elites, the public isn’t focused on these issues, either.”

The question posed by Biden’s January 6 speech, then, is not whether it will persuade anyone important to think about these issues differently. The odds are that it won’t.