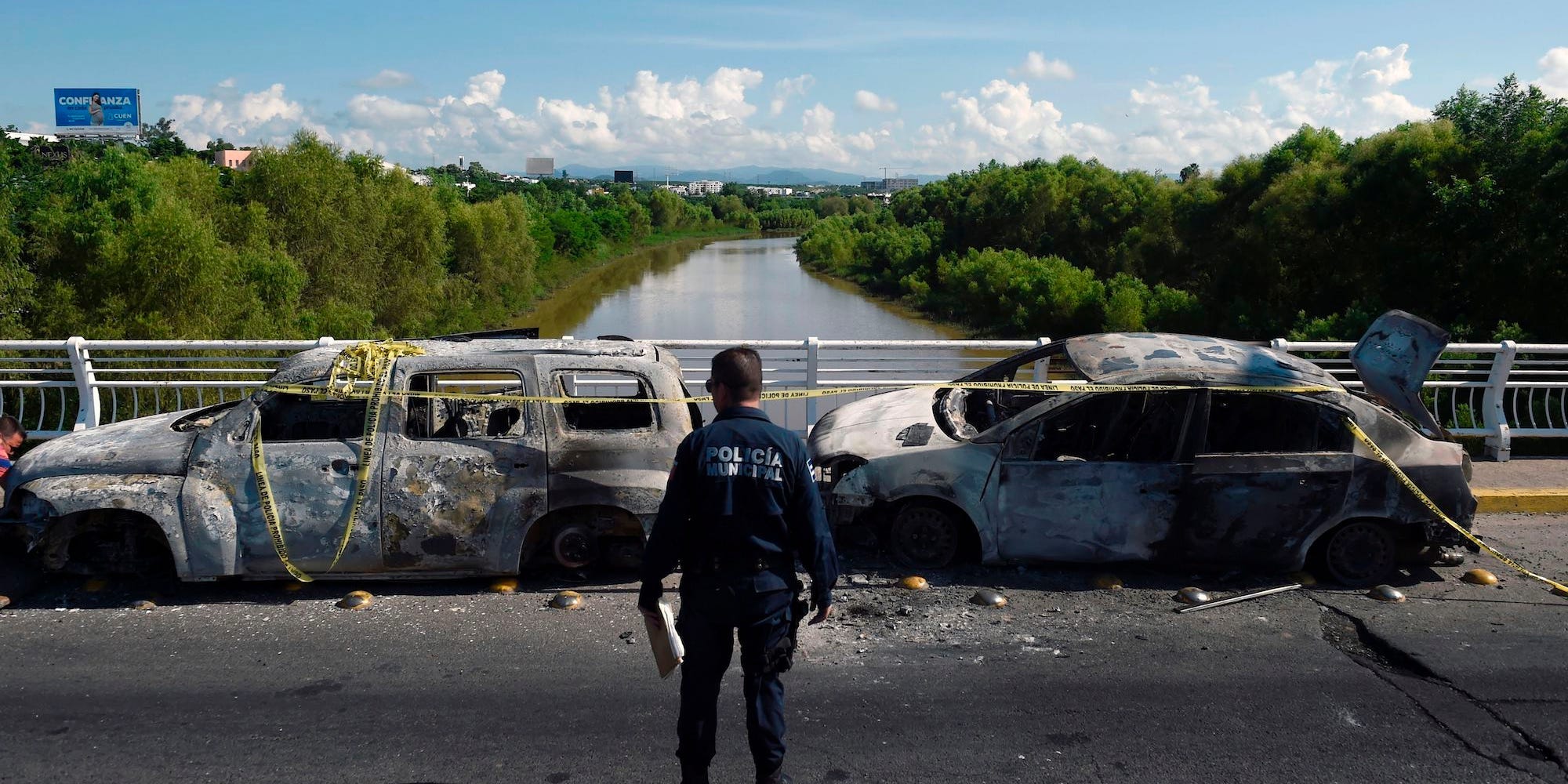 A Mexican policeman next to vehicles torched in a battle with heavily armed cartel gunmen in Culiacan, capital of Sinaloa state, October 18, 2019.

The arrest or death of Sinaloa Cartel leader Ismael “El Mayo” Zambada will trigger a full-blown war for control of the powerful criminal organization, according to federal officials and a former high-ranking Drug Enforcement Administration (DEA) official.

Unnamed officials cited by the newspaper Milenio predicted that a bloodbath will occur in the absence of Zambada, 73, at the helm of the cartel.

The new generation of young Sinaloa Cartel drug traffickers, among whom are the sons of former supremo Joaquín “El Chapo” Guzmán, will wage a war for control, the officials said, noting that 24 plazas within Mexico as well as influence in the United States and other foreign countries would be at stake.

They also said that cartel members would fight over access to suppliers who ship cocaine and other narcotics, including precursor chemicals for the manufacture of synthetic drugs such as fentanyl. Sinaloa cartel leaders, according to the US Justice Department.

Two cells of the cartel — one affiliated with Zambada and another led by Guzmán’s sons – are already engaged in an internal power struggle. Their dispute is predicted to escalate significantly without El Mayo, a diabetic, leading the cartel.

“The fuse is already lit,” a federal official told Milenio. The officials also said that other criminal groups would seek to take advantage of the power vacuum that would be created by the arrest or death of Zambada, a former poppy field worker for whom the United States is offering a US $15 million reward.

The Jalisco New Generation Cartel (CJNG) would attempt to seize control of territory where its fierce rival currently holds sway, they said.

Mike Vigil, a former chief of international operations for the DEA, told Milenio that the conflict between competing Sinaloa Cartel cells will not escalate while Zambada remains leader because he is highly respected within the organization.

In contrast, the sons of El Chapo – Los Chapitos – do not command a lot of respect outside the cell they control, he said. The lack of respect is due to the fact that they obtained their positions of influence from their father, Vigil said, adding that “they haven’t gotten their hands dirty” like other capos.

Regardless of whether El Mayo is captured or dies a natural death, the Sinaloa Cartel will “fracture” and “fragment,” and “we’ll see a war between the different groups,” he said. The Jalisco New Generation Cartel’s initials in Aguililla, a town in the Mexican state of Michoacan, April 23, 2021.

In Vigil’s assessment, there are only two major criminal organizations in Mexico: the Sinaloa Cartel and the CJNG.

“The Sinaloa Cartel is still the most powerful. The Jalisco cartel is also powerful, but more violent. If one group or the other sees a weakness … it will attack,” he said, noting that seizing new territory can increase drug trafficking profits by millions of dollars.

The US is offering a $10 million reward for information leading to Oseguera’s arrest. Like many cartel leaders, El Mencho has spent time behind bars, but El Mayo, perhaps Mexico’s most enduring narco figure, has never been imprisoned.

With reports from Milenio.