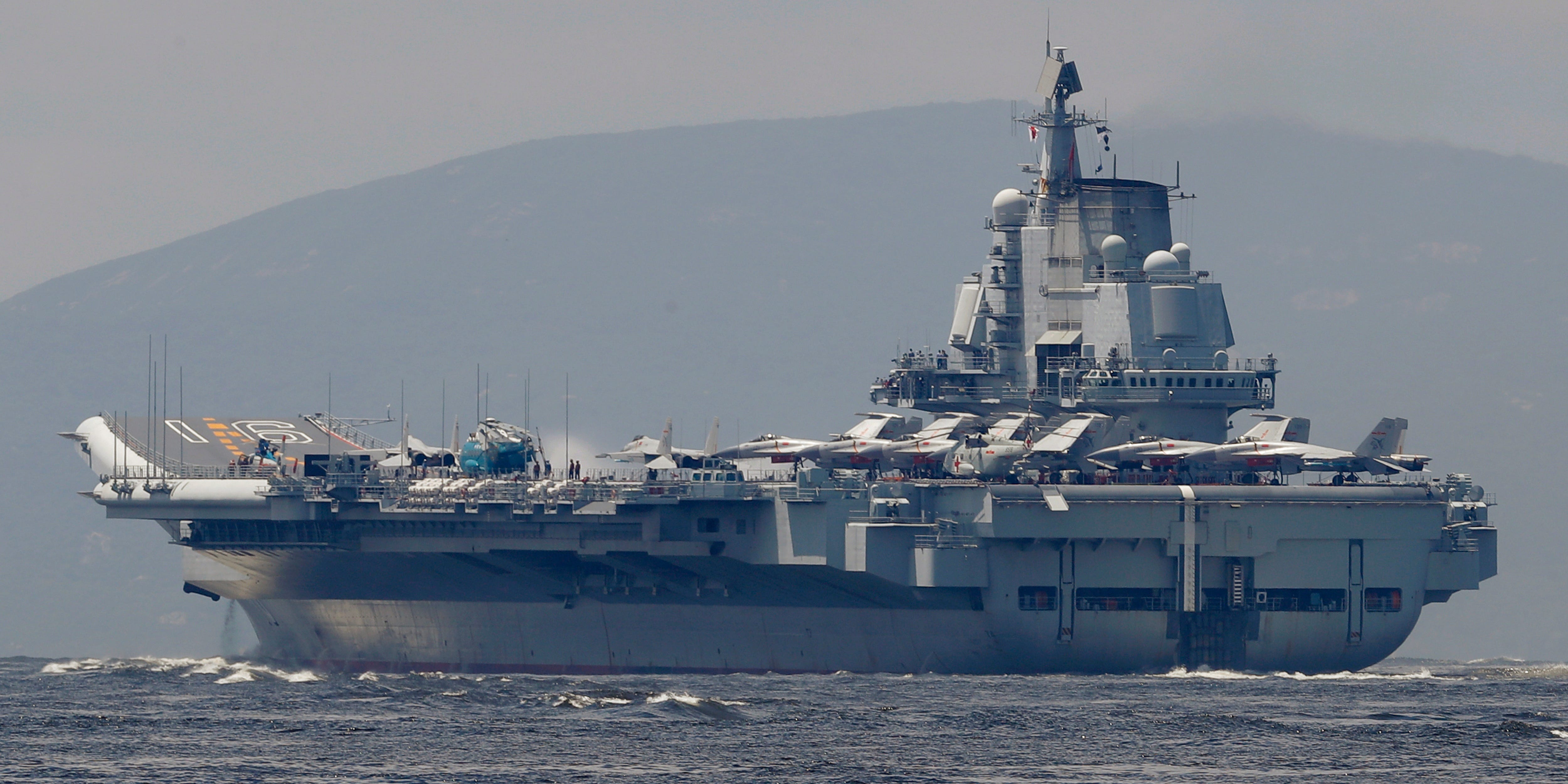 In December, two Chinese carrier battle groups went to sea simultaneously for the first time. They did so only weeks after the Chinese Navy’s newest large helicopter carrier began its sea trials.

These are major milestones for the PLA Navy, which is clearly advancing quickly in all respects. Yet they may be a red herring when it comes to the “the most dangerous place on the planet,” as the Economist accurately described the Taiwan situation last year.

Indeed, China does not require large and advanced warships to attack the island. This is quite easily grasped if one simply looks at a map and sees that the medium-sized island is less than 100 miles off of China’s coast.

If the US were to try to invade Cuba, would it need the 3rd, 5th, and 7th fleets? Hardly. The US Army and Air Force most likely would be quite sufficient without support from the US Navy. The same is true for Taiwan, which is unfortunate enough to be a very close neighbor of a nationalistic, rising superpower. Less than 3 miles of the South China Sea separate the Chinese city of Xiamen and Taiwan’s Kinmen islands, February 2, 2021.

In the first phase of an attack, Taiwan would be pulverized by thousands of ballistic and cruise missiles (not even counting lethal rocket artillery), eliminating its air defenses, hitting runways, and knocking out key communications nodes.

After that, hundreds of PLA Air Force bombers and attack aircraft would have free reign over the island, with critical assistance from surveillance drones and loitering “kamikaze” munitions.

The main purpose of these strikes, aside from eliminating Taiwan’s small navy and air force, would be to clear corridors over the island with massive firepower, paving the way for PLA soldiers to insert via parachute and helicopter.

Beijing has been massively upgrading its airborne forces so that all three major services are now making very regular parachute jumps. Exercises demonstrate that Chinese airborne forces, moreover, are undertaking more challenging jumps, including at night, in coastal areas, and even over the water. Chinese PLA paratroopers jump from a Y-8 aircraft during a Pakistan-China military exercise in Jhelum, November 24, 2011.

Having studied major airborne operations like Normandy in great detail, the PLA understands well that these troops require additional firepower and mobility, for which special light tanks, jeeps, and anti-tank weapons have been developed.

This crowded production schedule is supplemented with ample imports from Russia. A Russian expert on the PLA recently estimated the PLA force at 1,500 helicopters in a December 2021 analysis titled, “The Celestial Rotary-wing Empire.”

Between parachute and heliborne forces, China could quite reasonably hope to put 50,000 soldiers on the island in the first wave and well over 100,000 in the first 24 hours.

It is worth noting that Chinese strategists are acutely aware that these first assault waves will suffer very high casualties, but they consider this a necessary cost to obtain victory. Just as Chinese strategists are working to solve the firepower issue with airborne assault, they have been working assiduously on the supply problem. Beijing’s heliborne and airborne forces will be resupplied by parachute-dropped pallets and by heavy drones developed specifically for this purpose.

So while armor may get some use, the main forces coming ashore, at least initially, will be infantry in small, light craft that can built cheaply. This approach is in line with cutting-edge thinking about amphibious warfare.

As two US strategists giving advice to the US Marine Corps not long ago wrote: “smaller ground units and capabilities dispersed over wide areas [can] … achieve outsized effects.” Reflecting that emphasis on small size and greater dispersion, the PLA has in recent years taken great interest in operations with light craft.

These vessels have speed, stealth, and low cost, but perhaps their most notable virtue is their small size, allowing them to be carried and launched by almost any civilian vessel, including ships of China’s enormous fishing fleet.

Such vessels will run the gamut from inflatable rafts with outboard engines to small landing craft to more high-performance vessels. At the latter end of the spectrum is a 16-meter “new type high speed vessel,” specifically the Type 928D assault boat for ground forces, details of which were revealed in January 2020 by a Chinese shipbuilding magazine.

In such craft, which could easily be hidden in cavernous storage areas proximate to China’s massive ports, Chinese assault teams could access the entire Taiwan coastline in four or five hours. The assault vectors outlined above do not depend heavily on warships, but they do rely upon a large force of highly trained assault troops, special forces in particular.

As elite formations in Western militaries increased in size and ability during the war on terror, Beijing also invested keenly in such capabilities.

There was a glimpse of China’s intensity in developing these forces a few years ago, when a reporter for the Atlantic sized them up during an international counterterrorism competition. The PRC teams did not disappoint.

If one watches the Chinese military news regularly, it is apparent that these select soldiers are being prepared for stealthy insertion, night operations, sniper tactics, securing hard targets, urban combat, and mountain operations.

These troops would create mayhem in Taiwan’s rear areas, closing roads and attacking headquarters, but they would also secure crucial objectives, including crucial high ground, airfields, and small ports.

When Chinese forces do come ashore on Taiwan’s beaches, special-forces teams may well have already secured those landing areas.

The PLA fondness for special operations should not be very surprising. More than 2,000 years ago, the Chinese strategist Sun Tzu wrote: “use the normal force to engage; use the extraordinary force to win.” A Taiwanese military exercise simulating an attempted amphibious landing by Chinese forces, May 30, 2019.

American strategists, however, seem to prefer simply to count how many amphibious tanks could be put in the water, since the massive ships transporting those tanks could potentially be targeted by American torpedoes and missiles.

Crude models that seek a “technological silver bullet” to defeat a Chinese invasion fail to account for the fact that Taiwan is mostly composed of mountains and urban areas. In other words, this will be a good old infantry fight.

It should be noted that amphibious tanks have never been a decisive factor in beach assaults — not at Normandy, not at Inchon, and not in the Falklands. Rather, air power was decisive in those campaigns, and China has that in spades, supplemented by vast missile, drone, and long-range artillery forces.

An infantry fight can be deeply affected by airpower, of course, but soldier motivation will also play a decisive role. In that respect, China also seems to have a major advantage over Taiwan, which has been lackluster in its own defense.

American strategists would be wise to get real about this scenario with a better understanding of the local geography and developments in current Chinese military doctrine.

If, as this analysis suggests, favorable geography, combined with highly trained and motivated special forces — not to mention the obvious first-mover advantage — afford Beijing near-total mastery in a Taiwan scenario, these factors also mean Taiwan is the wrong place for Washington to draw a “red line” in the Asia-Pacific.

Lyle Goldstein is director of Asia Engagement at Defense Priorities. Formerly, he served as research professor at the US Naval War College for 20 years. In that post, he was awarded the Superior Civilian Service Medal for founding and leading the China Maritime Studies Institute.