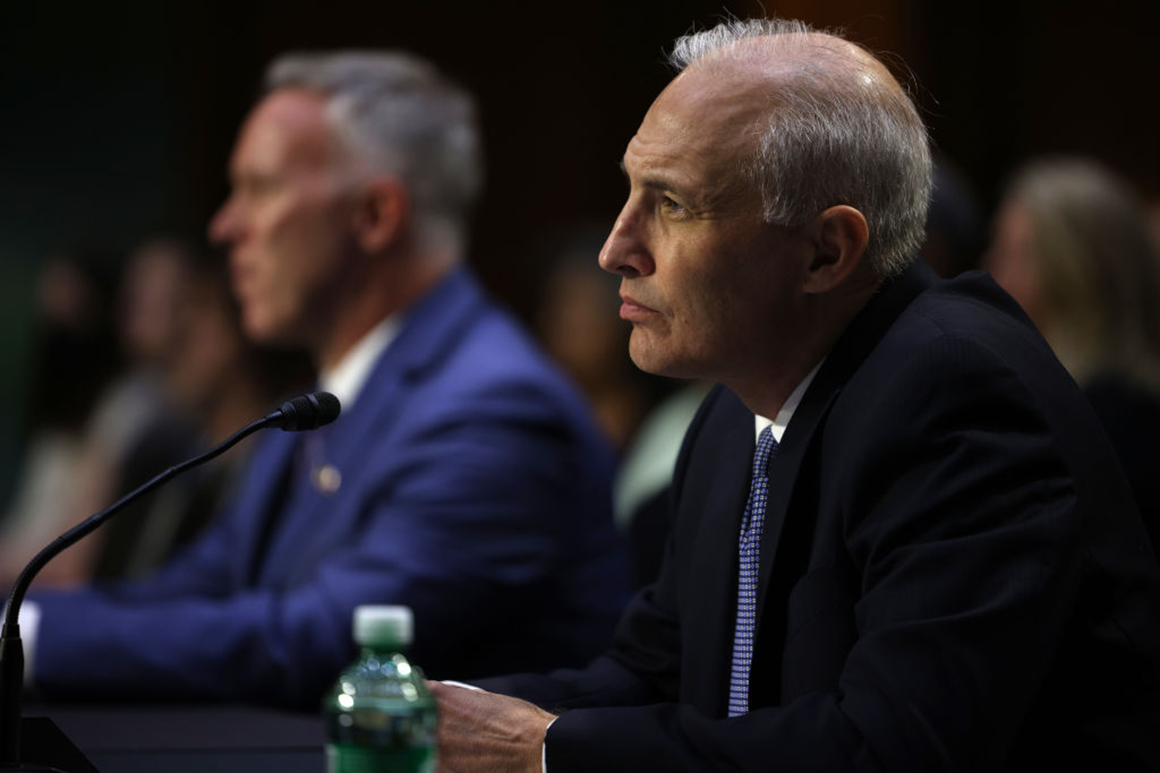 Democratic senators grilled top Justice Department and FBI officials on Tuesday for declining, so far, to declare Jan. 6 rioters’ crimes as “domestic terrorism” as judges sentence those involved for their crimes.

“When a mob of armed rioters use force in an attempt to overthrow the United States government, that is domestic terrorism,” Sen. Mazie Hirono (D-Hawaii) said as she pressed the department’s National Security Division chief, Matthew Olsen, and senior FBI official Jill Sanborn about the approach to the prosecutions. “My understanding is prosecutors have not been pushing for the sentencing enhancements available for acts of domestic terrorism.”

Sen. Richard Blumenthal (D-Conn.) wondered: “Why has the Department of Justice not used that statute that clearly applies to domestic, as well as international, terrorism?”

The questions came amid a Senate Judiciary Committee hearing on the Justice Department’s response to the storming of the Capitol building on Jan 6, 2021. Democrats challenged prosecutors for not seeking the lengthier, terrorism-related sentences related to the insurrection, while Republicans often steered the discussion away from the Jan. 6 attack altogether.

The sharp questions repeatedly put both witnesses on the defensive as they described the massive post-Jan. 6 probe that has resulted in criminal charges against more than 725 people over their alleged roles.

Olsen used the hearing to announce that he is creating a domestic terrorism unit to “augment” prosecutors’ work on such cases. But senators seemed largely uninterested in that bureaucratic initiative, pressing instead for answers on how the Jan. 6 investigation is being carried out.

POLITICO reported last week that while President Joe Biden, the FBI and the Justice Department have repeatedly called the insurrection an act of domestic terrorism, prosecutors have not to this point asked any sentencing judge to invoke a provision that can lead to much lengthier sentences when criminal acts are carried out for political purposes.

“I think it’s entirely appropriate that Jan. 6 events are being investigated as acts of domestic terrorism. … In any particular case, it will depend on the actual facts and circumstances of that particular case,” Olsen said. “That statute is available in the context of the investigations and prosecutions of the July [sic] 6 defendants.”

Olsen stressed that large investigations typically begin with lower-level actors and then proceed to those most culpable. “Whether that terrorism enhancement might apply in any future case remains to be seen,” he said.

Several Republican senators used their questioning to embrace and fuel a conspiracy theory that a man present during the Jan. 6 riot, Ray Epps, was secretly a government agent working to gin up the crowd. There’s scant evidence supporting that theory, but it has exploded in pro-Trump media outlets promoting a range of claims that agitators working for the FBI fueled the Jan. 6 assault on the Capitol.

Sen. Ted Cruz (R-Texas), who recently apologized for numerous public comments he has made describing the Jan. 6 attack as terrorism, pressed Sanborn on whether FBI agents or informants took part. Cruz pressed the theory that Epps — who was seen in videos on Jan. 5 encouraging Trump supporters to go into the Capitol — might be a government agency.

“A lot of Americans are concerned that the federal government deliberately encouraged illegal conduct on Jan. 6,” he said.

Sanborn initially declined to answer about Epps or other alleged informants or agents, but eventually said she was unaware of people linked to the FBI doing anything to aggravate the situation on Jan. 6.

“Not to my knowledge, sir,” Sanborn replied.

Sen. Lindsey Graham (R-S.C.) also asked Olsen whether he agreed with Vice President Kamala Harris that the Jan. 6 events were comparable to the Japanese attack on Pearl Harbor in 1941 and the terrorist strikes on the U.S. on Sept. 11, 2001.

Olsen declined to endorse or reject the comparison, but said Jan. 6 “must have been horrific” for those who were working in the Capitol at the time.

“Obviously, Jan. 6 was a singular event that is stretching the resources of our office and the U.S. Attorney’s Office in D.C.,” Olsen said. “I’m reluctant to compare it to any prior events in our history, but from my vantage point, it was unique and singular.”

Republican senators also returned to a favored subject Tuesday: a memo that Attorney General Merrick Garland issued in October, urging prosecutors and investigators to be alert to potential cases of threats to school boards and personnel.

Both Olsen and Sanborn seemed to downplay the school threats effort, indicating that it was occupying little, if any, time of those assigned to work terrorism cases.

“This is not a particular focus for the counterterrorism division,” Sanborn said. “A violation of federal law would have to be at the heart here for us to be involved.”

Olsen said national security prosecutors were available to advise in cases of threats against school officials, but he wasn’t sure that had ever happened.

”There’s no one that’s dedicated to that on any sort of full-time or really even part-time basis,” Olsen said. “I’m not aware that the National Security Division has played a role in any matter up to this date.”