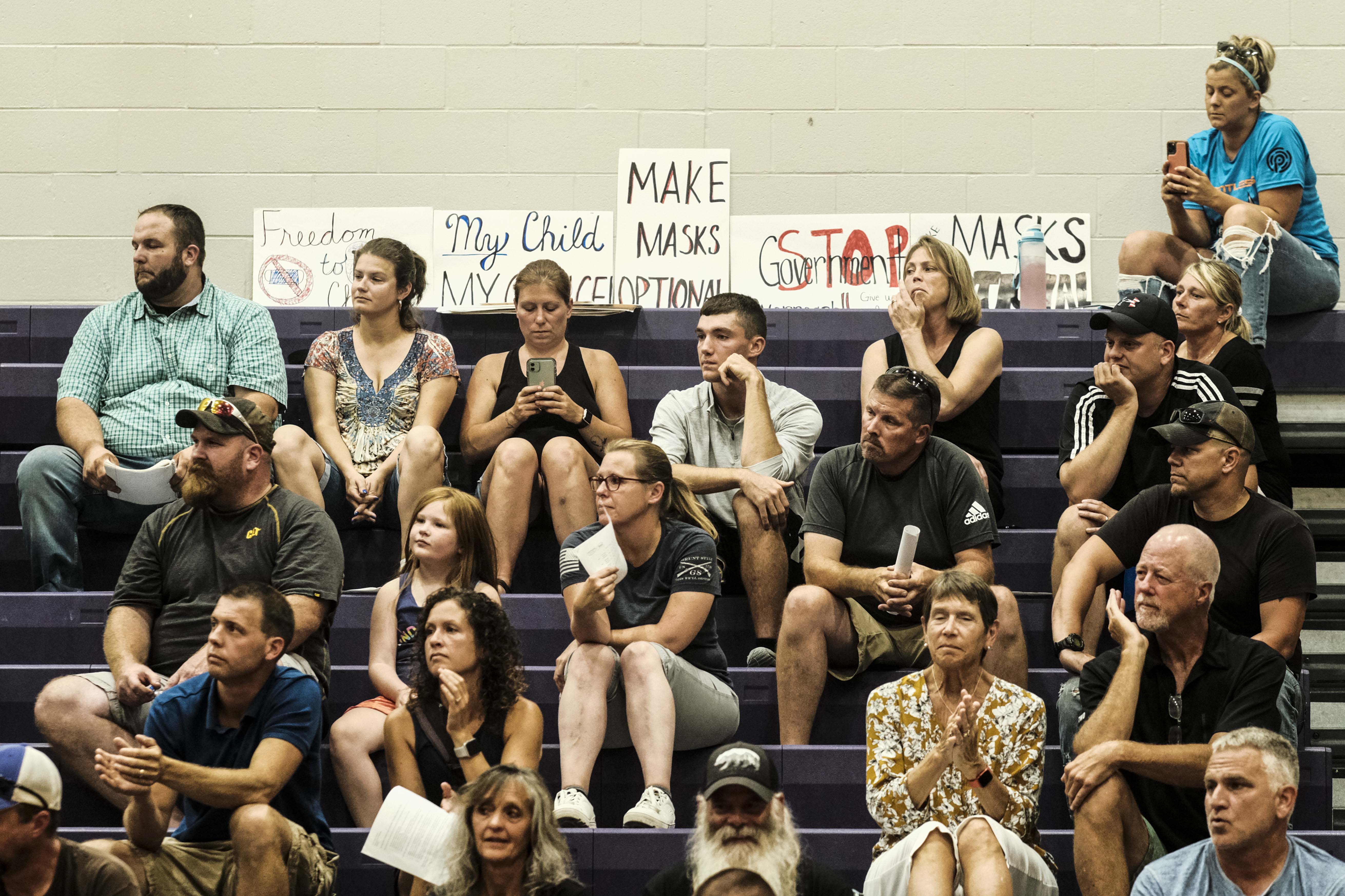 TALLAHASSEE, Fla. — Republicans across America are pressing local jurisdictions and state lawmakers to make typically sleepy school board races into politicized, partisan elections in an attempt to gain more statewide control and swing them to victory in the 2022 midterms.

Tennessee lawmakers in October approved a measure that allows school board candidates to list their party affiliation on the ballot. Arizona and Missouri legislators are weighing similar proposals. And GOP lawmakers in Florida will push a measure in an upcoming legislative session that would pave the way for partisan school board races statewide, potentially creating new primary elections that could further inflame the debate about how to teach kids.

The issue is about to spread to other states: The center-right American Enterprise Institute is urging conservatives to “strongly consider” allowing partisan affiliations to appear on ballots next to school board candidates’ names, as part of broader efforts to boost voter turnout for the contests. A coalition of conservative leaders — including representatives of Heritage Foundation, Manhattan Institute and Kenneth Marcus, the Education Department civil rights chief under former Secretary Betsy DeVos — have separately called for on-cycle school board elections as part of sweeping efforts to “end critical race theory in schools.”

In Florida, school boards are among the last elected officials who blocked policies of Gov. Ron DeSantis. If Republicans succeed in pushing the state to strip school board elections of their nonpartisan status and gain more representation on school boards, they could break the last holdouts who regularly defy the governor.

“We’re out there trying to elect good conservatives that will follow essentially the governor’s mission as it relates to education,” said Sen. Joe Gruters (R-Sarasota), the state Senate’s education chair who also leads the Republican Party of Florida.

“When you have a leader like DeSantis come out and say that there should be no lockdowns, if you have a Republican elected official, you would think they would probably give him the consideration and probably go along with what he asked.” The latest attempts for making school board races partisan affairs come as education has been thrust into the spotlight amid the pandemic and the high profile victory of Gov.-elect Glenn Youngkin in Virginia, who campaigned on a promise to give parents more say in their kids’ education. It also comes as other crucial battleground issues are bubbling up in education, including classroom lessons on history and race — a subject that has emerged as a boogeyman for GOP policymakers in numerous states who are condemning efforts to teach young people about the nation’s history of discrimination.

With all of these policies converging, there have been clear disconnects among state and local leaders, and even parents, over how to educate their children. Republicans are openly embracing parental rights as a key factor shaping policy in D.C. and many statehouses — seen in proposals to strengthen protections for parents against schools.

“There’s a major underestimation nationwide, even on the political side, that these parents are really frustrated,” said Bridget Ziegler, a Sarasota County school board member who is also the wife of the Florida GOP vice chair.

These divides have brought new energy to a long-running debate on the role of overt partisanship in school board campaigns, as prominent conservative groups have called this year for major shifts in the timing of board elections and for voters to see party labels on their school board ballots.

“Including party labels in school board elections seems like a commonsense reform that would give voters more information, while also potentially increasing participation and enhancing local accountability,” wrote Aaron Churchill of the conservative Thomas B. Fordham Institute in August. “But such a change would be an uphill battle.”

The debate is no longer theoretical in Tennessee, which, like most states, once prohibited expressly partisan school board election. Tennessee’s law, signed by Republican Gov. Bill Lee in November, allows local political parties to put forward candidates that are openly Republican, Democrat or Independent.

Tennessee’s law is softer than lawmakers’ original pitch to require partisan school board elections in the state. Yet it has set off a flurry of activity by county politicians who are moving to enact the law and notable divides among local school boards that disagree with it.

“This is not something that has been done in Tennessee. I don’t think it’s healthy, and I think that’s a rather universal thought among the school boards in Tennessee,” Jim Welch, president of the Kingsport Board of Education, said last month as members approved a resolution that said partisan elections could “create division among the board and shift the focus away from the needs of the students.” Partisan labels aside, nothing is stopping political parties from getting involved in school disputes. Texas Republicans this month announced the party’s plans to boost conservative candidates in nonpartisan school board and municipal elections. The party’s vice-chair described the effort as “one of the most consequential initiatives our party can undertake.”

Making school board races partisan could make an already heated political landscape even more contentious, said Martin West, a professor of education at the Harvard Graduate School of Education.

While partisanship could rally the base and drive turn out, it also could ratchet up the polarization that’s already at a fever pitch.

“I do think party labels would produce more informed voters,” West said. “But, at the same time, it would likely accelerate emerging trend of nationalization of local education politics.”

Although Republicans are making a concerted effort to leverage education as an issue influential to voters, West isn’t convinced schools will play a determining role in the 2022 midterms. He claims that he hasn’t seen conclusive evidence of any “seismic shift” in the public’s thinking on education and that school board activism playing out locally could be more about “vocal minority” than a mass movement.

West said it doesn’t matter how the 2021 elections are interpreted because leaders in both parties have already accepted the narrative that education was key and are acting upon that.

Yet according to a recent poll by the Democratic Governors Association, education was the “number one” issue in Virginia that motivated Biden voters to switch and align with Youngkin, who delivered a major upset to Democrats by winning Virginia’s gubernatorial race. Florida this fall was also the scene of a high-profile education clash between DeSantis, the Biden administration and school boards that broke from the Republican governor’s policies. During a monthslong fight in the fall over mask mandates, some of the state’s biggest school districts defied the popular GOP governor, who in turn steered state officials to block any schools from requiring masks as a means to combat the Delta strain and empower parents to make decisions for their children.

Amid this fight, Gruters introduced a bill in the Senate that would ask voters on the 2022 ballot if they want partisan school board elections. He and other Republicans said that supplying voters with party affiliation of such candidates would lead to better transparency while Democrats argue that it could lead to violence against school officials who have come under fire for resisting DeSantis.

Democrats, who are in the minority in the state legislature, are also concerned that voters with no party affiliation will be shut out of primary elections. Florida, along with more than a dozen other states, holds closed primaries, meaning only registered voters can cast ballots in party primary elections. About 3.8 million voters, or 26 percent, of Florida’s residents are not affiliated with a party.

But regardless of the fight over partisan school board elections, Ziegler is convinced education will continue to keep the attention of parents and locals who feel betrayed by the school board members who disobeyed DeSantis. She predicted the effects of the pandemic will inspire new candidates to run and could reshape the landscape for boards in the state.

“You can bet all day long that you’re going to see more people voting in school board races,” Ziegler said.