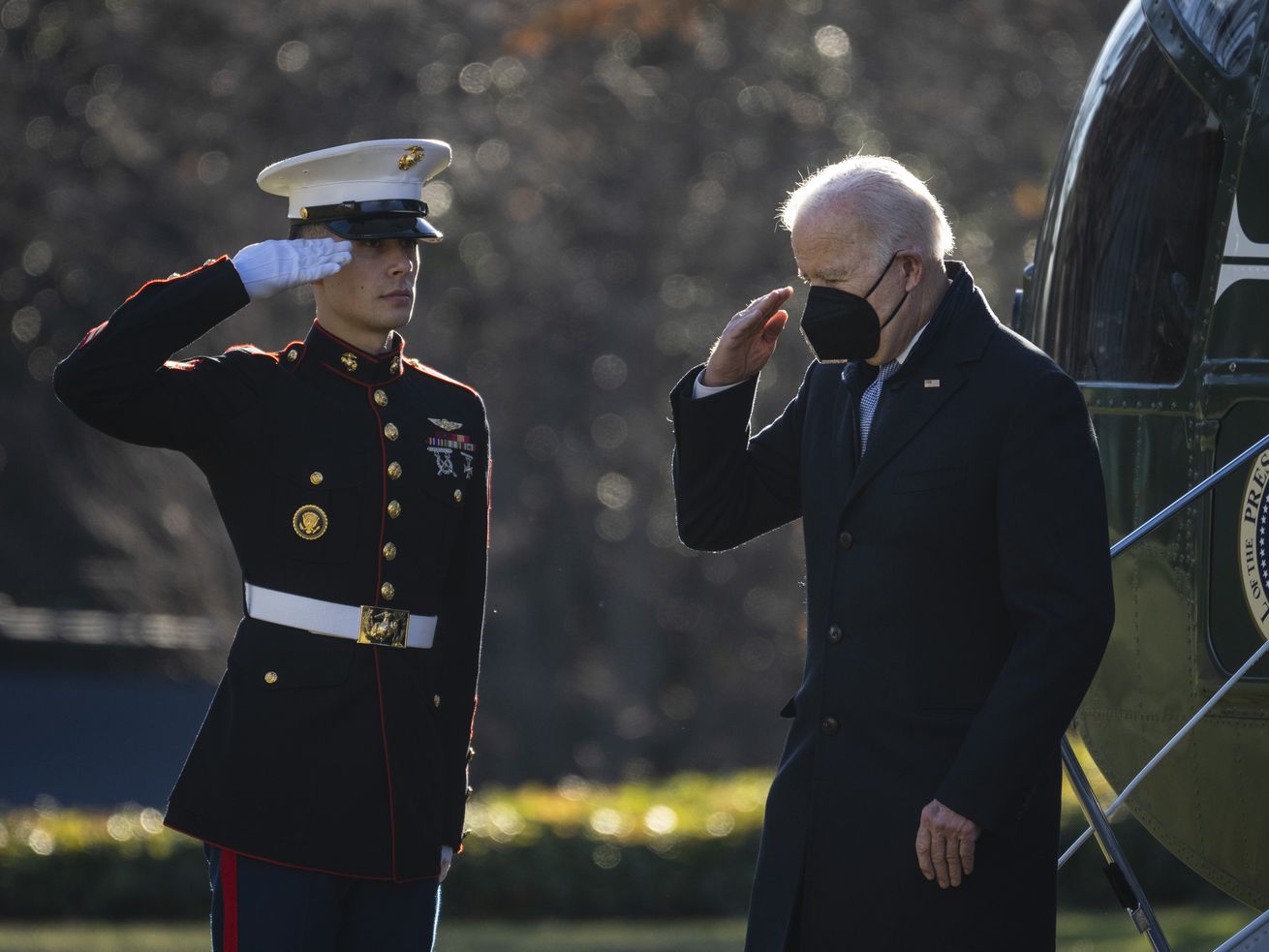 President Joe Biden salutes as he exits Marine One at the White House on December 20. | Drew Angerer/Getty Images

The disturbing implications of a GOP judge’s ruling against the military’s vaccination requirement, explained.

One of the most well-settled principles of US national security law is that courts give tremendous deference to the military’s decisions regarding how to maintain discipline among its own personnel. “The essence of military service,” the Court held in Goldman v. Weinberger (1986), “is the subordination of the desires and interests of the individual to the needs of the service.” Servicemembers voluntarily give up some of their constitutional rights when they choose to join the armed services.

And yet, on Monday, a notoriously partisan federal judge in Texas thumbed his nose at decades of law and Supreme Court precedents, holding that members of the military may refuse an order to take the Covid-19 vaccination if they object to it on religious grounds. In a brief order in US Navy SEALs 1-26 v. Biden, US District Court Judge Reed O’Connor claims that a policy requiring nearly all servicemembers to be vaccinated against Covid-19 violates both the First Amendment and a federal religious liberty statute.

The plaintiffs in the SEALs case are represented by the America First Policy Institute, a young policy shop led by former Trump administration officials and other former consiglieri to the ex-president.

O’Connor, a former Republican Capitol Hill staffer, is probably best known for his failed effort to repeal Obamacare in its entirety. Although O’Connor attempted to strike down the landmark health law in 2018, his decision was widely mocked even by prominent conservative opponents of Obamacare. He was eventually reversed by the Supreme Court in an opinion joined by four of the Court’s Republican appointees.

O’Connor’s SEALs opinion isn’t just wrong under established precedent, it is egregiously wrong. It’s also weakly argued. He spends less than six pages discussing the core issue in the case — whether the military’s vaccination policy must include exemptions for personnel with religious objections — and does not even acknowledge Supreme Court cases that directly refute his analysis, including the Goldman decision mentioned above.

Under ordinary circumstances, O’Connor would be swiftly reversed. But his decision will be appealed to the US Court of Appeals for the Fifth Circuit, a court dominated by Donald Trump appointees and other hardline conservatives who share many of O’Connor’s sensibilities.

Should this case reach the Supreme Court, its fate is unclear. The Court’s Republican majority is typically quite sympathetic to cases brought by religious conservatives, although the Court has also rejected several requests from health care workers seeking religious exemptions from vaccination requirements.

And it is equally unclear whether the Supreme Court’s 6-3 conservative majority will honor its own precedents urging the judiciary to defer to an elected branch led by President Joe Biden.

The Supreme Court has long held that courts typically should defer to the elected branches on military matters, even if that means individual rights apply with less force to servicemembers.

Under ordinary circumstances, for example, the Court has held that “a party seeking to uphold government action based on sex must establish an ‘exceedingly persuasive justification’ for the classification.” But in Rostker v. Goldberg (1981), the Court permitted the Selective Service System to discriminate against men by requiring them, and not women, to register for the draft.

As the Court explained in Rostker, “it is difficult to conceive of an area of governmental activity in which the courts have less competence” than on questions of military governance. “The complex, subtle, and professional decisions as to the composition, training, equipping, and control of a military force are essentially professional military judgments, subject always to civilian control of the Legislative and Executive Branches.”

This judicial deference to the military sometimes comes at a high price — the same doctrines that require courts to defer to a military vaccination requirement also bolstered discriminatory policies such as Don’t Ask, Don’t Tell. But such deference is also supposed to prevent highly political judges like O’Connor from imposing their preferences on the military.

Indeed, the Supreme Court has specifically held that this deference to the elected branches applies when a servicemember seeks a religious exemption from a military regulation. That was in Goldman, which held that a Jewish officer was not exempt from an Air Force regulation prohibiting him from wearing a yarmulke — or any other form of head covering while he was indoors.

“Our review of military regulations challenged on First Amendment grounds is far more deferential than constitutional review of similar laws or regulations designed for civilian society,” Justice William Rehnquist wrote for his Court in Goldman. Granting an exemption, Rehnquist warned, would undermine servicemembers’ “habit of immediate compliance with military procedures and orders” — a habit that “must be virtually reflex with no time for debate or reflection.”

Goldman eviscerates the plaintiffs’ First Amendment arguments in the SEALs case, and yet O’Connor does not mention it once in his entire opinion.

I want to emphasize the sheer audacity of this omission. State bars typically impose a duty of “candor toward the tribunal,” which requires lawyers to disclose binding precedents that negate their arguments. The Texas Disciplinary Rules of Professional Conduct, for example, provide that “a lawyer shall not knowingly … fail to disclose to the tribunal authority in the controlling jurisdiction known to the lawyer to be directly adverse to the position of the client and not disclosed by opposing counsel.”

If a mere lawyer had filed a brief arguing that the military’s Covid-19 vaccination policy violates the First Amendment, but failed to cite the Goldman decision in that brief, that lawyer could face professional discipline or even disbarment. And O’Connor must have known about the Goldman decision because it is discussed in the government’s brief defending the military policy. Yet he did not even hold himself to the minimal ethical standard demanded of the lawyers who practice in his court.

Nor does O’Connor discuss the Supreme Court’s most recent decision governing religious liberties in the national security context, Trump v. Hawaii (2018), which held that “‘any rule of constitutional law that would inhibit the flexibility’ of the President ‘to respond to changing world conditions should be adopted only with the greatest caution,’ and our inquiry into matters of entry and national security is highly constrained.”

In fairness, O’Connor determined that the military’s policy violates both the First Amendment and the federal Religious Freedom Restoration Act (RFRA), and the Supreme Court’s decision in Burwell v. Hobby Lobby (2014) does indicate that RFRA sometimes provides more robust protections than the First Amendment does.

But Hobby Lobby was not a national security case — it involved an Obama administration rule requiring most employers to include contraceptive coverage in their employees’ health plans. And O’Connor doesn’t even try to argue that RFRA provides the SEALs plaintiffs with greater protections than they enjoy under the First Amendment. Indeed, he explicitly rejects this claim, writing that “for the same reasons Plaintiffs succeed on their RFRA claim, they also prevail on their First Amendment claim.”

There are obvious downsides to the Supreme Court’s decisions demanding judicial deference to the military — sometimes military personnel raise compelling claims that their individual rights are being denied needlessly. But there’s also a very significant upside to these cases.

The Court’s decisions establishing that the military is “subject always to civilian control of the Legislative and Executive Branches” play an important role in maintaining elected civilian control over the armed forces. Judges should not exercise command over the military for the simple reason that they are not elected, and thus unaccountable to the people if they exercise that command unwisely or maliciously.

I want to be careful not to exaggerate the immediate significance of O’Connor’s opinion. Wrong as it is, it will apply only to a small fraction of servicemembers. The overwhelming majority of servicemembers are vaccinated.

Given O’Connor’s highly partisan record, he should not be trusted with that power.