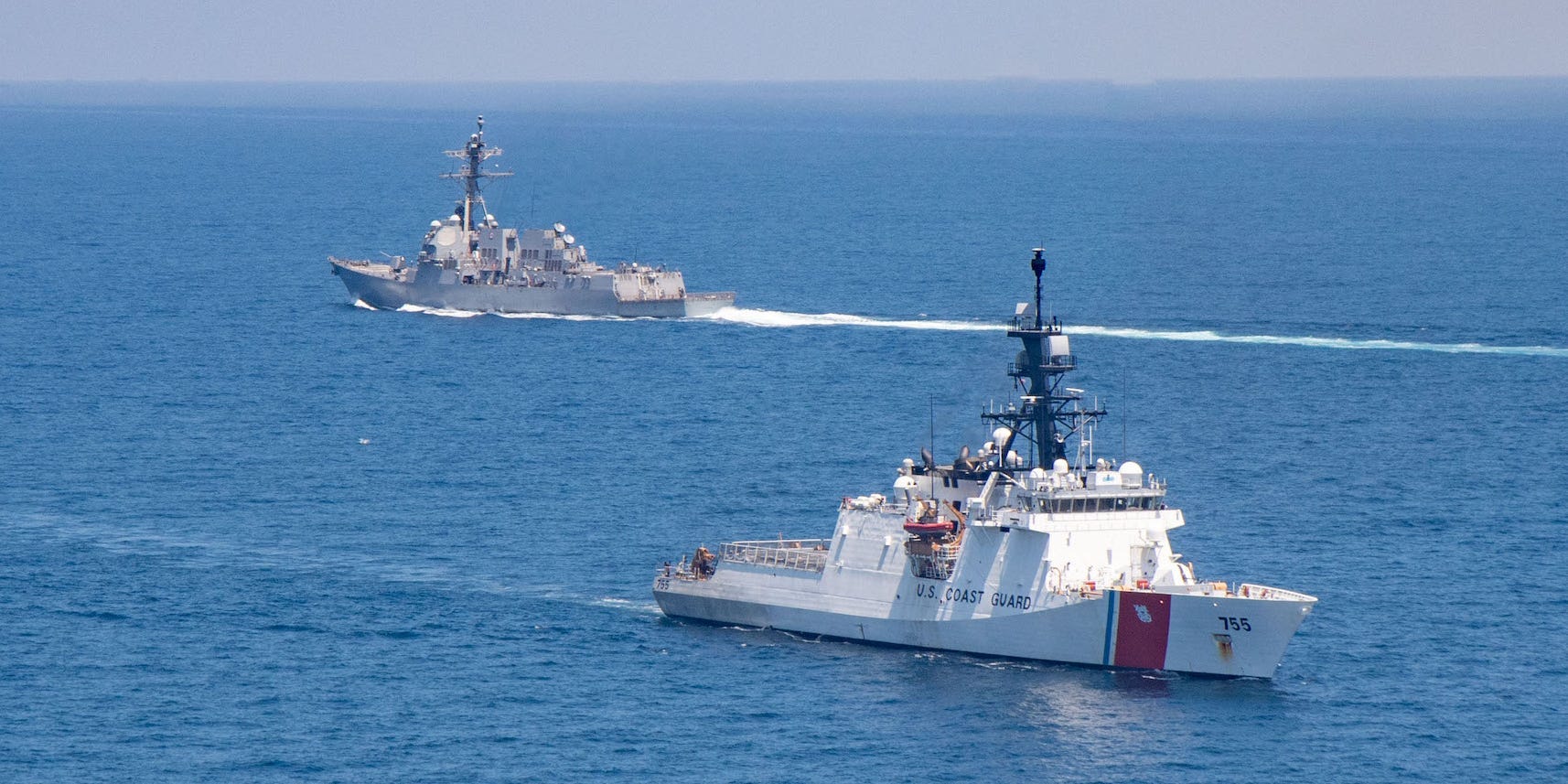 Competition with China has drawn more Pentagon resources to the Pacific, but the most visible US military presence there may be the branch that is outside of the Defense Department.

The ships and personnel of the US Coast Guard, which is part of the Department of Homeland Defense, are spending more time in the region conducting missions for which other branches aren’t well suited, balancing that increasing demand with a lengthy list of other responsibilities.

“What we do, it’s not big in numbers, but it’s, I think, pretty significant in contribution. We get access. We can go places,” Adm. Karl Schultz, commandant of the Coast Guard, said at a Navy League event in December.

Schultz singled out the cutter Munro, which in October returned from a 102-day Indo-Pacific deployment. Operating under US Navy command, Munro trained with allies and partners in the East and South China Seas and “exercised” a memorandum of understanding with Taiwan, Schultz said. Munro also sailed through the Taiwan Strait, which, like past transits, was condemned by China.

“The Chinese [are] pretty excited when the Coast Guard’s over there training with the Taiwanese,” Schultz said last month. “These are places that move the needle a little bit.” The Coast Guard has a longstanding presence in the Pacific. Activities Far East, one of only two overseas Coast Guard commands, was set up in Japan 70 years ago. Its ships have patrolled around US territories and other Pacific countries for much longer.

“The US Coast Guard has more than 150 years of service in the Pacific region. We’re very proud of that,” Vice Adm. Michael McAllister, commander of the Coast Guard’s Pacific Area, said a press conference in September.

The Navy has led recent US military efforts to counter China in the region, and its Japan-based 7th Fleet had tactical control of Munro during its deployment. The Coast Guard commissioned three new ships into service during a ceremony in Guam on July 29, 2021.

Among those unique capabilities are law-enforcement authorities and expertise in search and rescue, marine environmental response, and humanitarian assistance.

“Frankly, those are different missions than the US Navy or the military services here in the United States deal with,” McAllister said in September.

That expertise has renewed relevance amid tensions with China. Illegal fishing is a major concern, especially the activity of China’s oversea fishing fleet, and the Coast Guard is increasing its efforts to help countries police their waters. In December 2020, it helped Palau apprehend a Chinese vessel fishing illegally in Palau’s exclusive economic zone.

The Coast Guard also based three new cutters in Guam this summer and renamed its outpost there. The new name, Coast Guard Forces Micronesia Sector Guam, is meant to “showcase that they are our forward-deployed, forward-present operating node,” Vice Adm. Linda Fagan, the service’s vice commandant, said in September.

The outreach isn’t limited to small island countries. Munro trained with the Philippines and Indonesia and conducted a first-of-its-kind at-sea replenishment with Japan’s military. The service has also given retired cutters to Vietnam, and that kind of engagement has been “tremendously important” for improving US-Vietnam relations, Ted Osius, US ambassador to Vietnam from 2014 to 2017, said this summer.

Current and former officials tout the Coast Guard, in its responsibilities and its conduct, as a model for the region and as a sought-after partner because of it.

“When we show up, we’re greeted with open arms because the mission set is so critical to these countries that we want to be good partners to,” Randall Schriver, assistant secretary of defense for Indo-Pacific security affairs during the Trump administration, said in September.

“At the end of the day, we try to model a type of behavior that keeps commerce open, peacefully resolves disputes, protects valuable resources, and counters illicit activities,” McAllister said, noting that forces in the region often give their ships a stripe that is “very similar to the Coast Guard stripe.”

‘An issue of resources’ There has never been more demand on the Coast Guard for domestic and international missions, Schultz said last month, and that looks set to grow under the Biden administration.

“The Coast Guard is an extraordinarily important tool, one that we are looking to see if there’s ways of expanding the presence and the level of engagement, because the issues that really matter to countries in the Pacific in many cases are much more aligned” with the Coast Guard’s missions, Edgard Kagan, senior director for East Asia and Oceania on the National Security Council, said in September.

The service has limited capacity to meet that demand, however.

“How do you stretch an organization of 42,000 active-duty [personnel] across the globe? You do it in chunks. You don’t do it in persistent presence,” Schultz said in December.

Replicating the two back-to-back five-month cutter deployments to the Indo-Pacific in 2019 is “probably the stretch goal,” Shultz said, adding that a more likely commitment is having a cutter in the region for 100 to 150 days a year.

That rising demand has prompted concern about whether the Coast Guard is receiving enough resources to support what it’s being asked to do. The service is undertaking what Schultz called the “largest recapitalization program since the Second World War” to replace aging ships, but its operating budget was flat during the 2010s, and it didn’t benefit from recent boosts to the defense budget.

“If we’re going to get serious with the Coast Guard as a tool for international engagement, we have to invest a lot more so that that tool is available,” Schriver said.

The Coast Guard’s defense readiness mission in support of the Defense Department, one of its 11 statutory missions, is a small part of the Coast Guard’s operations, but lawmakers are scrunitizing how much support the service is being asked to give the Pentagon.

“I remain concerned that the Coast Guard is being asked to support the Department of Defense in ways that are outside of its defense-readiness mission and stretching its already thin resources even thinner,” Rep. Anthony Brown of Maryland told Insider in a statement.

Schultz said the service has made headway on its funding needs in recent years but has also called for sustained budget growth of 3% to 5% a year in order to “deliver the Coast Guard the nation needs.”

Brown, who serves on committees that oversee the Navy and Coast Guard in Congress, said lawmakers and policymakers “need to strike the right balance” to position the Coast Guard to be effective.

“This is an issue of resources, and I’ll continue to fight for the funding our services need. But that funding must also be managed correctly and strategically,” Brown said.