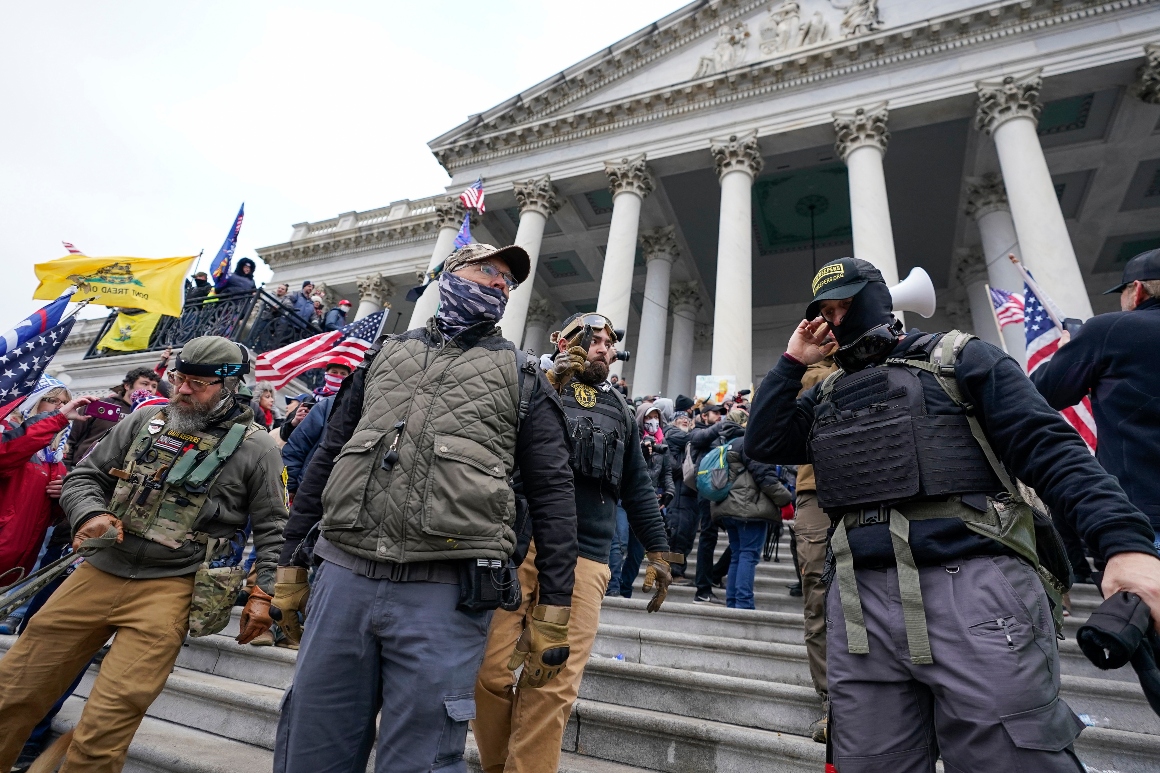 Edward Vallejo, an Oath Keeper indicted last week on charges of seditious conspiracy to prevent the transfer of power from Donald Trump to Joe Biden last year, has been ordered detained pending trial.

A federal magistrate judge in Arizona on Thursday found that the evidence prosecutors amassed against Vallejo, 63, showed that he presented an ongoing danger to society.

The judge, John Boyle, said prosecutors had presented compelling evidence that Vallejo was prepared to shuttle a large cache of firearms and other weaponry into Washington D.C. to aid other the efforts of Oath Keepers to storm and occupy the U.S. Capitol on Jan. 6, 2021.

Vallejo oversaw the stockpile at a Comfort Inn in Arlington, Va., and stayed in contact with Oath Keeper leaders, including the national head, Stewart Rhodes, according to the indictment which charged both men for the first time last week

Rhodes never ordered Vallejo to bring the weapons into Washington, prosecutors say, because the pro-Trump crowd managed to get inside the Capitol without them. Boyle said that didn’t change the calculus of the danger Vallejo presented to the public.

“I think If Mr. Rhodes had given that order you would have complied,” Boyle said. “You are a serious danger at this time.”

A federal public defender, Debbie Jang, urged Boyle to release Vallejo, emphasizing that prosecutors had known many of the details about his conduct for nearly a year but had allowed him to remain free. If he were as dangerous as prosecutors alleged, she said, they would have moved to incarcerate him sooner. Federal pretrial services investigators similarly recommended Vallejo’s release pending trial with strict conditions, such as GPS monitoring, the defense attorney noted.

“The government can’t have it both ways,” Jang said. “Either his words were so dangerous that he needed to be detained back then or his words were just words …They did not make a move on Mr. Vallejo after a year after the alleged incident.”

Boyle did ask attorneys for both sides about how long Vallejo had known his actions were under scrutiny by federal investigators.

Assistant U.S. Attorney Louis Manzo said law enforcement visited Vallejo’s home last May to seize his telephone, but there had been no negotiations or further discussions with him prior to his arrest last Thursday.

While at times during the hearing Boyle seemed open to releasing Vallejo, the defendant’s social media posting in recent weeks may have tipped the balance in favor of keeping him locked up pending trial.

Manzo noted that less than two weeks ago Vallejo retweeted a message that said: “The real insurrection happened in the wee hours of Nov. 4, 2020.” Such comments, the prosecutor said, showed that Vallejo was a continuing threat. (Manzo did not mention that former President Donald Trump continues to regularly make similar remarks.)

Prosecutors also contend that just last month Vallejo took to Twitter to threaten violence in a rant against the head of the World Health Organization, Tedros Ghebreyesus.

“I HAVE NEWS FOR YOU … you will NEVER achieve ‘vaccine equality’ as long as I, and others like me, are alive!,” the tweet said. “I will DIE first, and that’s only when I run out of AMMUNITION!”

That clearly did not sit well with Boyle.

“There appears to be no evidence before me of remorse,” the judge said. “Conversely, there is evidence here that, even now, you’re making incendiary statements regarding ammunition and potential violence.”

Vallejo can appeal the detention order to the judge overseeing the seditious conspiracy case in Washington, D.C., Amit Mehta. Boyle indicated Vallejo would soon be transferred to Washington for further proceedings in the case.

Rhodes was also arrested last Thursday. His detention hearing was delayed due to quarantine issues, according to a court docket, and is scheduled for Monday in Plano, Texas. Rhodes and Vallejo were charged along with nine other Oath Keepers in the seditious conspiracy case. Another nine members of the alleged conspiracy are facing obstruction charges that have been broken off into a separate indictment.

The 20 alleged co-conspirators represent the most complex case the Justice Department has brought against the more than 725 defendants charged with participating in the Capitol riot. Prosecutors have also filed conspiracy charges against key leaders of the Proud Boys, another right-wing extremist group that they say made an organized effort to hinder the transfer of power.

Vallejo appeared at his detention hearing in Phoenix Thursday by phone and could not see the proceedings by video or other means. After Boyle issued his ruling, he asked whether Vallejo could hear him.

After a pause, Vallejo replied, “I heard every word, sir.”