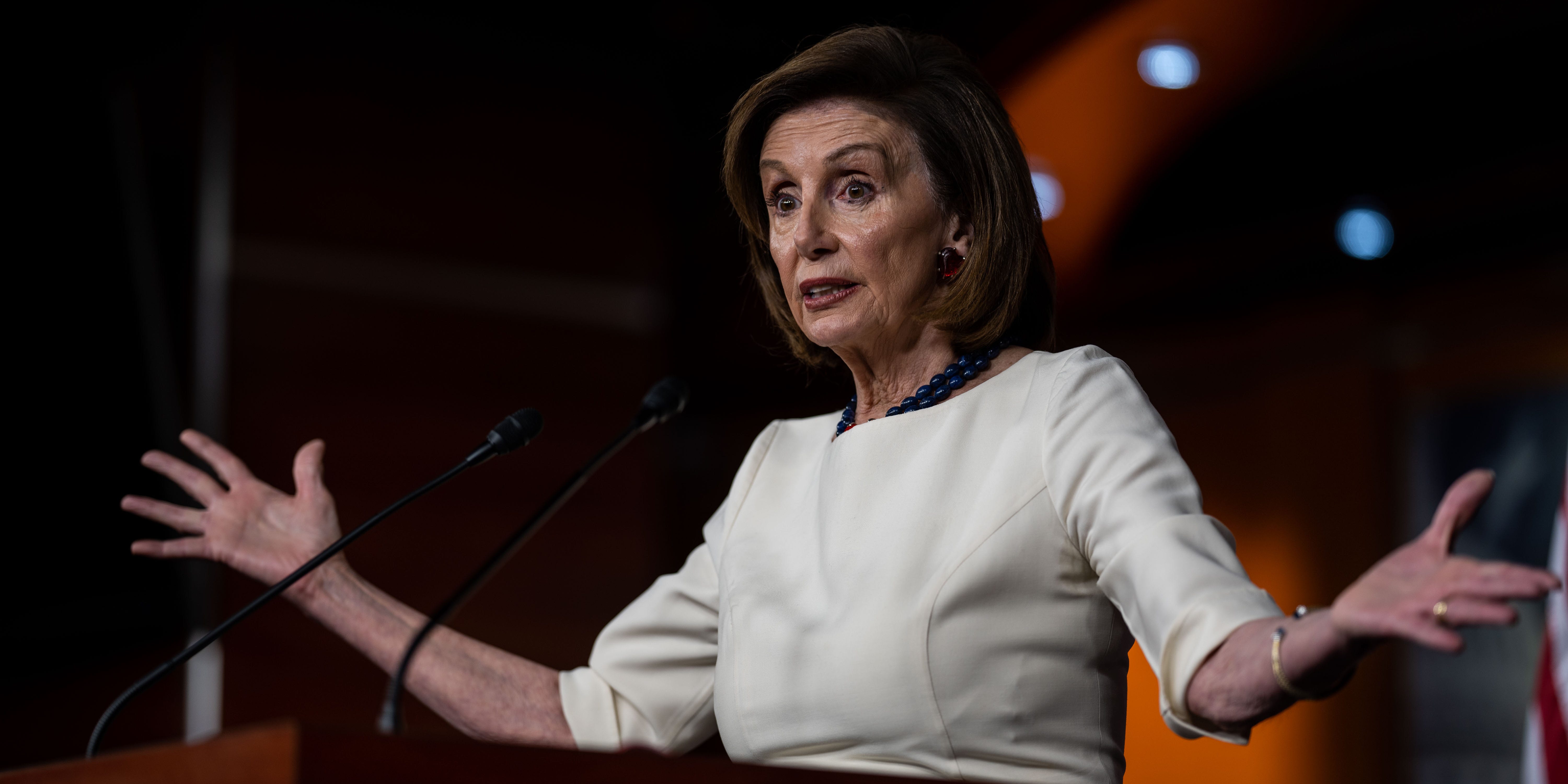 Speaker of the House Nancy Pelosi, a Democrat from California, takes questions from reporters at her weekly news conference on Capitol Hill on Thursday, Nov. 4, 2021.

The Democratic leader asked the Committee on House Administration to investigate how many members have broken the reporting requirements of the the 2012 Stop Trading on Congressional Knowledge Act, also known as the STOCK Act.

At least 54 members of Congress and 182 of their top aides have violated the STOCK Act’s disclosure provisions, according to Insider’s “Conflicted Congress” investigation, which published in December.

Drew Hammill, Pelosi’s deputy chief of staff, told Insider that the Speaker asked the panel to look into “the possibility of stiffening penalties,” and confirmed it would extend to senior staff.

“The speaker believes that sunlight is the best disinfectant and has asked Committee on House Administration Chair Zoe Lofgren to examine the issue of Members’ unacceptable noncompliance with the reporting requirements in the STOCK Act,” he said. The panel is responsible for setting rules on lawmakers and staff, including everything from human resources directions to ethical standards.

“We are a free-market economy. They should be able to participate in that,” Pelosi said, adding that members of Congress should report their trades on time.

But while the STOCK Act requires members of Congress to publicly report their stock transactions within 30 to 45 days, depending on when they learned about a trade, dozens of Democrats and Republicans alike have recently failed to do so. Some have broken federal disclosure deadlines by months with stock trades worth into the millions of dollars.

Lawmakers who have violated the STOCK Act’s disclosure provisions routinely invest in companies that vie for federal contracts and lobby the federal government, sometimes spending millions of dollars annually to do so.

Pelosi does not personally trade stocks, but her husband, Paul Pelosi, has millions of dollars worth of stock investments that the speaker must by law disclose.

Insider also contacted Senate Majority Leader Chuck Schumer’s office and the Senate Rules Committee to ask whether the Senate might undertake a similar review, but did not immediately receive a response. On Tuesday, Schumer dodged a question about whether he supported a stock trading ban for lawmakers, but told Insider “I don’t own any stocks, and I think that’s the right thing to do.” Republican House Minority Leader Kevin McCarthy of California and Democratic Rep. Alexandria Ocasio-Cortez of New York are among a growing, bipartisan coalition of lawmakers who have expressed support for a ban on members of Congress trading individual stocks.

Insider’s “Conflicted Congress” investigation found that few face consequences for violating the law, including cases in which they reported millions of dollars in trades months or even years late.

Scofflaws are supposed to pay a late fee of $200 the first time they file a report about their stock trades late, and increasingly higher fines are supposed to follow if they continue to be late — potentially costing tens of thousands of dollars in extreme cases. But that rarely happens.

Pelosi’s latest actions come as lawmakers on both sides of the aisle have in recent days proposed a slew of similar bills to ban stock trading, including a pair of competing proposals unveiled on Wednesday by Sen. Jon Ossoff, a Democrat of Georgia, and Sen. Josh Hawley, a Republican of Missouri.

House Minority Leader Kevin McCarthy of California, who is poised to become the new speaker if Republicans win back the House after the 2022 elections, told Punchbowl News this week he supports restrictions on members of Congress buying and selling individual stocks. Democratic Rep. Alexandria Ocasio-Cortez and Democratic Sens. Elizabeth Warren of Massachusetts, Jeff Merkley of Oregon and Mark Warner of Virginia have also said they want tough restrictions on lawmakers’ stock trades.

Pelosi’s decision also arrives as the White House on Friday opened the door to a potential ban on members of Congress trading individual stocks.

Meanwhile, Rep. Angie Craig, a two-term Democrat from Minnesota, is preparing to next week introduce a resolution banning members of the US House from owning “common stock of any individual public corporation.”

Unlike the several other bills lawmakers are introducing to squelch stock trade activity among members of Congress, Craig’s resolution, if passed, wouldn’t be a law. Instead, it’d be a House rule that only applied to House members and not subject to a vote in the US Senate or the signature of President Joe Biden.

Why is Craig willing to defy Pelosi on this matter and potentially invite political blowback from the speaker?

“I just fundamentally disagree with her on this topic … I wish the speaker had a different point of view,” Craig told Insider on Friday. “If the American people can’t believe that we’re here just to serve them, not to pad our own portfolios, then how can they trust we’re doing what’s in our best interest?

“I want to start the conversation about why my leadership wants to block this legislation,” Craig said, adding that she will “working across the aisle to see what kind of support we can build.”

Craig recalled once participating in a House Subcommittee on Aviation hearing about Boeing, the aviation and defense contracting giant.

“I literally sat there that one day and said to myself, ‘My God, if I wanted to short Boeing today, and make a little money — this is the most ridiculous thing in the world that members of Congress can trade individual stocks,” she said. “We often get information before the general public.”