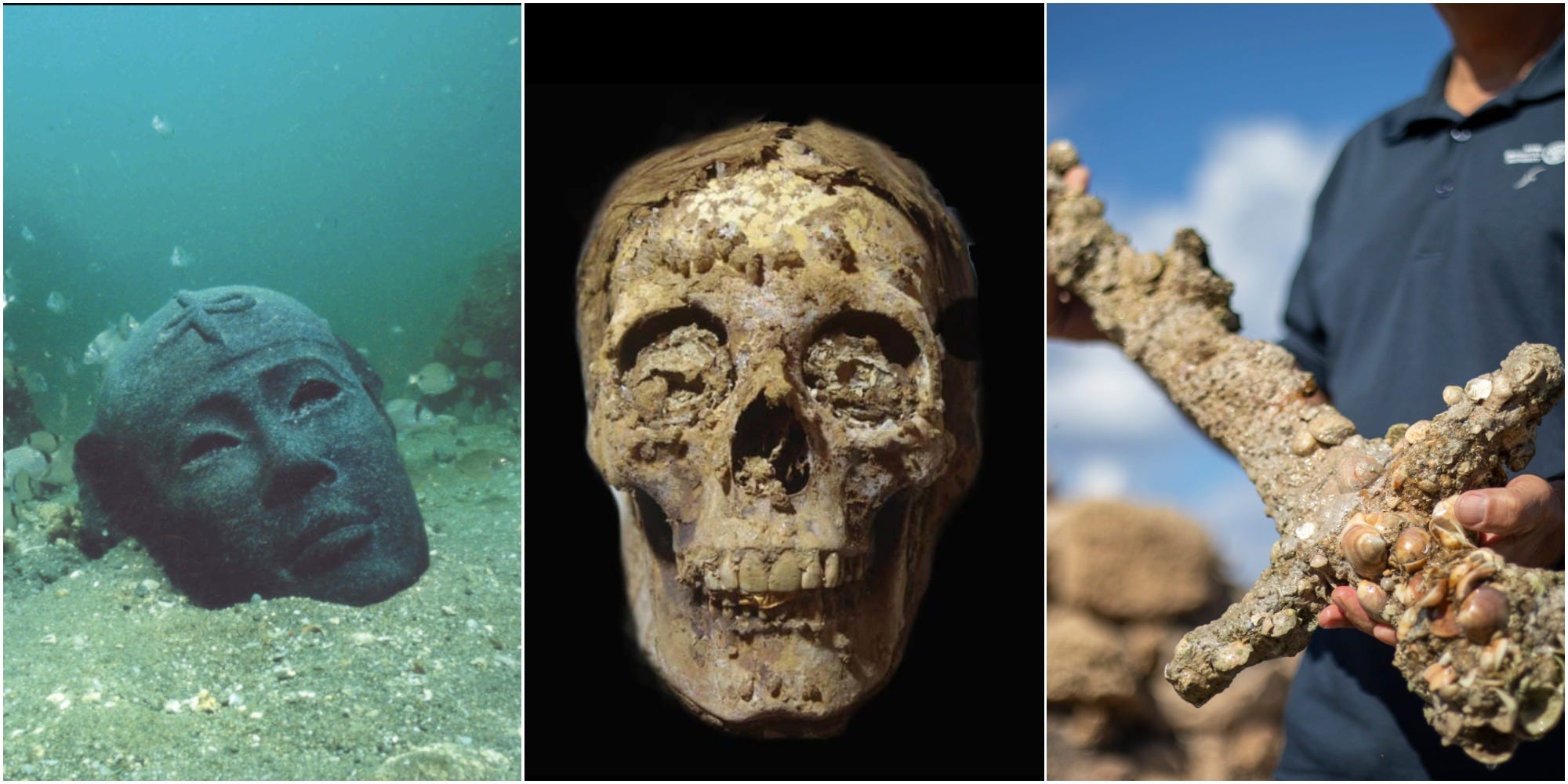 In 2021 archaeologists discovered an array of lost treasures of the ancient world.

2,400-year-old baskets of fruit discovered in ancient Egyptian city under the sea Head of Diorite found in Abu Qir Bay, where ancient cities of Canopus and Thonis-Herakleion are.

Egypt Ministry of Tourism and Antiquities

In August 2021, Insider’s Alia Shoaib reported that 2,400-year-old baskets of fruit were discovered in an ancient Egyptian under-sea city Thonis-Heracleion.

Archaeologists found a trove of ancient artifacts from the fourth century BCE, including wicker baskets filled with doum, fruit from an African palm tree, grape seeds, and Greek ceramics.

The fascinating discovery was made by a team of researchers from the European Institute for Underwater Archaeology, led by the French marine archaeologist Franck Goddio, who discovered the ruin of Thonis-Heracleion twenty years ago.

Goddio told the Guardian that the fruit had been untouched for over 2000 years, calling the find “incredible.” Inside the sarsen circle at Stonehenge.

In February, Archaeologists in England found two ancient graves near the prehistoric Stonehenge in Salisbury.

The find was made during excavations necessary before the creation of a new highway tunnel.

The two graves were declared to be roughly 4,500 years old — as old as the stones in the central circle of the henge — and belonging to a mother and baby.

The pair were thought to be related to those who built the circle, with Matt Leivers, an archaeologist with Wessex Archaeology who helped survey the area having told Insider: “The later arrangements of bluestones would have been built around the time these people lived and died — if they weren’t the builders then they might have been their relatives, or perhaps their children or grandchildren.”

Stonehenge has been a mystery for centuries — until February 2021, when researchers discovered the stones had been transported from Wales to Salisbury, suggesting the henge is a type of burial ground. The city was found after seven months of excavating.

In April 2021, Jacob Sarkisian reported that a “lost golden city” was found in Egypt, 300 miles south of Cairo.

It was one of the largest ancient cities ever discovered in the country and one of the most significant finds since the discovery of Tutankhamun’s tomb a century ago.

The team said in a statement: “The Egyptian mission under Dr. Zahi Hawass found the city that was lost under the sands. The city is 3,000 years old, dates to the reign of Amenhotep III, and continued to be used by Tutankhamun and Ay.”

The city features several neighborhoods, intact 10-feet-high walls, and even a bakery.

The earliest evidence of tobacco used by hunter-gatherers in the US West 12,000 years ago At the beginning of October 2021, Joshua Zitser reported that the earliest evidence of tobacco use was found in Utah.

The find dates back over 12,000 years, with the leaf believed to be used by hunter-gatherers for food preparation.

This uncovered the fact that humans may have been using tobacco some 9,000 years earlier than previously thought. Jacob Sharvit, director of the Marine Archaeology Unit of the Israel Antiquities Authority, holds a meter-long (yard-long) sword, that experts say dates back to the Crusaders, in the Mediterranean seaport of Cesarea, Israel, Tuesday, Oct. 19, 2021.

In October 2021, an amateur diver in Israel made an incredible find: a three-foot crusade-era sword.

Shlomi Katzin came across a giant sword, covered in shells and marine life, 13 feet under the Mediterranean waves as he was exploring the waters of the Carmel coast.

Katzin also found giant metal and stone anchors and bits of pottery nestled in a 1,000 square-foot patch of the sandy seabed during his exploration.

Katzin reported his find to the Israel Antiquities Authority, and they declared the sword to be from between the 11th and 13th centuries.

“It is exciting to encounter such a personal object, taking you 900 years back in time to a different era, with knights, armor, and swords.” Nir Distelfeld, an inspector for the IAA’s Robbery Prevention Unit, said in a press release.

Archaeologists discovered an Egyptian mummy buried with a golden tongue Archaeologists found an Ancient Egyptian mummy with a golden tongue covering still in its mouth in El Bahnasa, Egypt.

Egyptian Ministry of Tourism and Antiquities

In February 2021, archaeologists in Egypt uncovered a mummy buried with a golden tongue in its mouth.

Egyptian and Dominican archaeologists found 16 burial shafts at the Taposiris Magna Temple near Alexandria. When searching the places of rest, they found one mummy who was given a golden amulet in the shape of a tongue placed in its mouth.

The amulet is a great honor, thought to give the dead the ability to speak to gods. Nail found in the heel bone of the ancient skeleton.

In December 2021, Insider’s Rebecca Cohen and Erin Schumaker reported that a skeleton in England was found with a nail through its foot — rare evidence of Roman crucifixion.

Researchers in Cambridgeshire were analyzing findings from a dig of an ancient Roman settlement, and when they researched the bones found, they discovered this evidence of crucifixion.

While crucifixion was thought to be relatively common for the Roman era, few pieces of evidence for it exist.

The find is just the fourth known crucifixion in the world, with it ranking as the best-preserved one.

Astonishing images of Roman slave quarters in Pompeii frozen in time for almost 2,000 years by a volcanic eruption A “slaves’ room” at a Roman villa, containing beds, amphorae, ceramic pitchers, and a chamber pot discovered in a dig near the ancient Roman city of Pompeii, destroyed in 79 AD by a massive volcanic eruption, Italy, 2021

The room, frozen in time due to the Mount Vesuvius eruption of 79 AD, featured beds, a chest, and a chamber pot.

Gabriel Zuchtriegel, director-general of Pompeii’s archaeological park, hailed the findings on the Pompeii website as a “window into the precarious reality of people who seldom appear in historical sources.”

High-tech scanners ‘unwrapped’ a mummified Egyptian pharaoh, revealing a seemingly healthy 35-year-old with no clues for how he died Facemask of the unwrapped mummy of Pharaoh Amenhotep I.

The images showed “unprecedented detail” of the body of Amenhotep I, said Sahar Saleem, a professor of radiology and lead author of a study on the mummy.

Amenhotep was the second Pharaoh of Egypt’s 18th dynasty, ruling for over two decades in 1525 BC.

The scans were able to age the Pharaoh and tell that he was 5 feet, 6 inches, tall, circumcised, had a narrow chin, a small narrow nose, curly hair, mildly protruding upper teeth, and a pierced left ear. A soldier’s dagger from 15 BC was found in Oberhalbstein (Graubünden, Switzerland) before and after restorations.

In Switzerland, a volunteer archaeologist uncovered a Roman-era dagger that has revealed intricate details of an ancient battle.

Schmid unearthed the dagger in the mountainous Graubünden region of Switzerland, an area believed to be the site of a lost battlefield where Imperial Roman soldiers fought Rhaetian warriors in approximately 15 BC.

This discovery then sparked further explorations, revealing a battlefield.

The dagger, dated to around 15 BC, is a rare find. The team behind the discovery explained that only four of its kind had ever been found in former Roman territories.

You can read the full report from myself and my colleague Joshua Zitser.