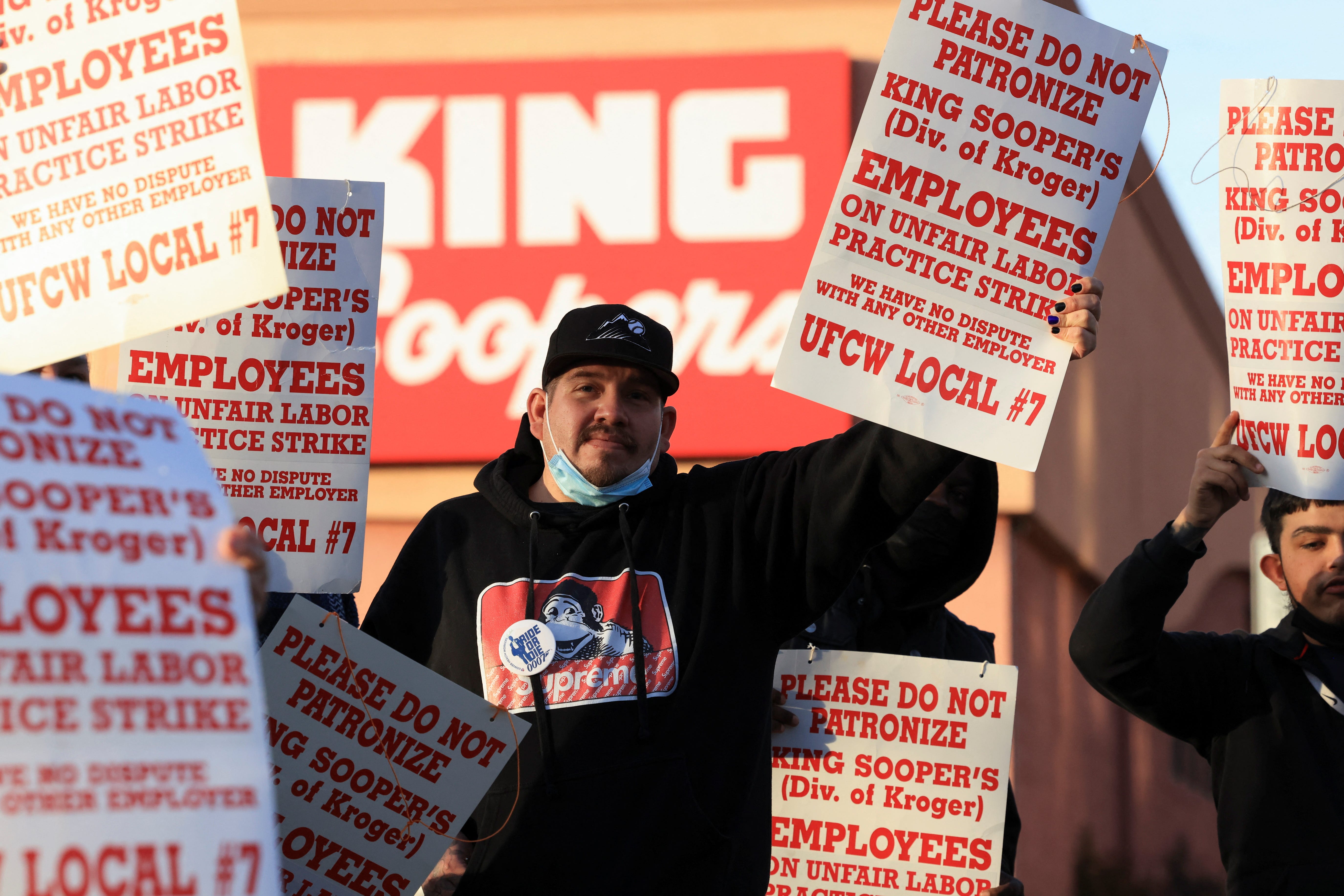 Union members raise signs outside a King Soopers store during a protest as workers go on strike in Denver, Colorado, U.S., January 12, 2022.

The United Food and Commercial Workers Local 7 union, which represents King Soopers workers in Colorado, is planning to strike for three weeks until February 2, the union said in a statement emailed to Insider.

The unionized workers are striking over labor practices, which they say include low wages, unfair health benefits, and an unsafe work environment, the UFCW said in an emailed statement.

Kroger tried to negotiate a new collective bargaining agreement with the UFCW this week, offering a starting pay of $16 per hour and more healthcare benefits.

The union refused the supermarket operator’s final offer on Tuesday, saying the company didn’t respond to its requests regarding salaries, benefits, and safety issues.

Kroger and the UFCW didn’t immediately respond to Insider requests for comment.

The supermarket chain told The Wall Street Journal on Wednesday that the union was “reckless and self-serving” to go on strike.

Kroger told the publication that it was keeping its stores in Denver open, and it had hired temporary staff to help out. Employees from other parts of the US have traveled to the city to fill the gaps, Kroger told the Journal.

The union filed a lawsuit against Kroger’s King Soopers in December, accusing the company of breaching the collective bargaining agreement by using third-party staffing services to employ staff for roles covered by the union.

King Soopers filed a complaint against the union with the National Labor Relations Board this week, accusing it of unfair labor practices, The Denver Post reported.

The strike comes after workers at two Kroger-owned supermarket chains in Oregon walked off the job in December claiming unfair labor practices.

US Senator Elizabeth Warren tweeted Wednesday that she supports the Kroger workers on strike, saying that the company has “made billions by jacking up consumer prices,” but was rewarding executives with the profits, instead of raising wages for workers.

The strike comes nearly one month after more than one thousand Kellogg’s workers ended their 77-day long strike against the company over pay and benefits after accepting a new bargaining agreement.