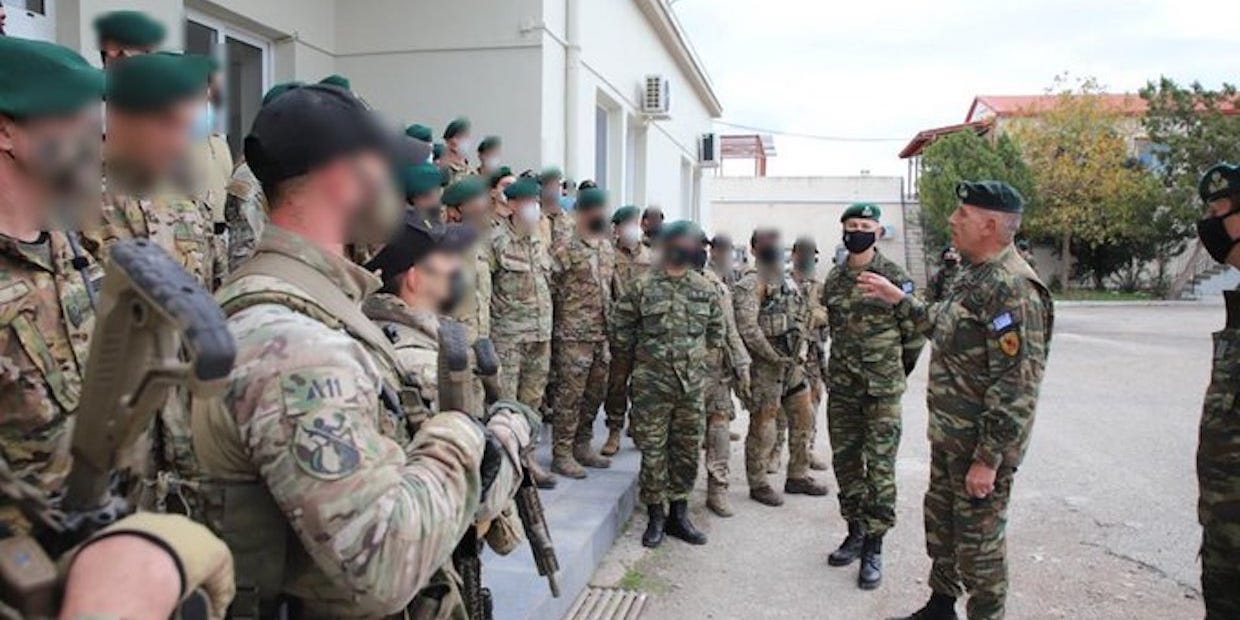 Evaluators from the NATO Special Operations Forces Headquarters (NSHQ) traveled to Greece and put the country’s elite special operators through the wringer.

The Special Paratroopers Section, Ειδικό Τμήμα Αλεξιπτωτιστών (ΕΤΑ), the tier-one special-operations unit of the Hellenic Army, not only passed with top marks but also achieved the highest possible rating. Simulating a real-world operation, ETA special operators forward-deployed and performed a wide range of missions, making use of all their infiltration techniques and skill sets.

The whole unit took part in the evaluation, as did a Chemical, Biological, Radiological, and Nuclear warfare element that was attached to ETA.

The NSHQ committee evaluated ETA as “Combat Ready” and described its performance as exceptional, meaning that the Greek commandos can now deploy as part of a NATO Special Operations Land Task Group.

Gen. Constantine Floros, chief of the Hellenic National Defense General Staff and a special operator himself, said in a tweet, “my warm congratulations to the ETA for the excellent performance in the unit’s evaluation by the NATO Special Operations HQ. [We are] proud once more for the combat ready ETA.”

By achieving the Level 3 rating, the Special Paratrooper Section joins special-operations powerhouses, such as the UK’s Special Air Service, the US Army’s Delta Force, and the US Navy’s SEALs, in a very exclusive club. ETA primarily specializes in strategic reconnaissance and direct action and is modeled on the British Special Air Service.

With less than 100 special operators in total, the ETA is one of the smallest special-operations units in the Greek military.

The ETA can operate in all war-fighting domains, including land, sea, and air, and even though it’s part of the Hellenic Army, it has an amphibious capability.

As a strategic special-operations unit, it’s intended only for the most important and most difficult operations. It is on constant no-notice standby for a deployment anywhere within Greece.

The ETA suffered a rare casualty in 2020, when one of its operators was killed during a military free-fall jump. The death came during a period of extremely heightened tensions with Turkey — stoked by Ankara’s threats to conduct illegal underwater surveys inside the Greek and Cypriot exclusive economic zone — when the unit was on very high alert. ETA was created in 1959 and for decades was closely associated with the Greek Airborne School.

In its early days, the unit was tasked with rapid deployment behind enemy lines in order to conduct unconventional warfare and harass an enemy force. In the early 2000s, however, the unit moved to a new base, assuming a slightly bigger footprint and doubling down on military free-fall operations.

NATO first began coordinating its special-operations capability in 2006 with the creation of the NATO Special Operations Coordination Center (NSCC).

In 2010, the NSCC was replaced by the NSHQ, which is charged with advising and synchronizing the activities of NATO special-operations units and developing commando capabilities to deal with and deter non-state and near-peer threats. In addition to rating individual units, the NSHQ offers a wide range of courses for special operators and has facilities in several NATO countries.

Over the past decade, NATO has gone through a special-operations resurgence. Many of its members have professionalized their elite units.

“As threats to peace continue to evolve, we must unlock the full potential of our allies and partners to respond. Whatever the threat, we continue to uphold our promise to NATO and to the alliance,” Clarke said.