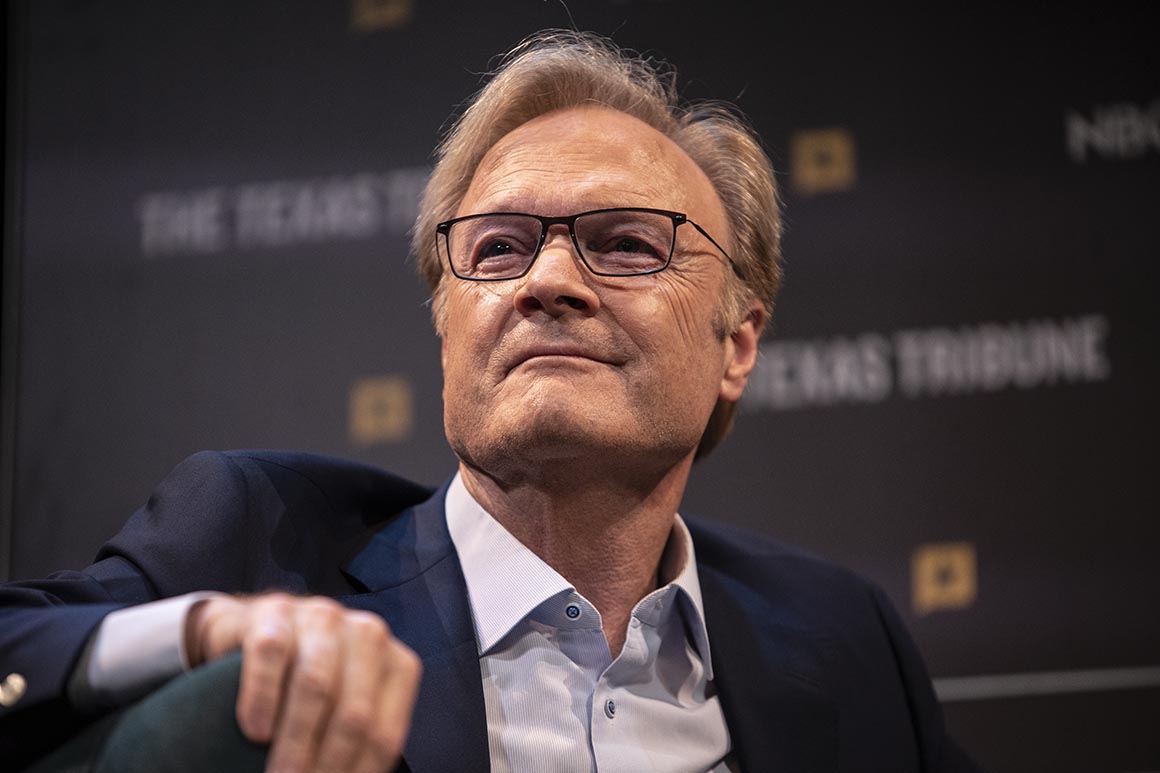 When his contract renewal was in doubt four years ago, Lawrence O’Donnell begged his viewers to help keep him on the air at MSNBC.

Now, as the left-leaning network’s prime-time lineup is at its most unstable point in a decade, the 70-year-old anchor has inadvertently become MSNBC’s most valuable star; or, at least, its most dependable one, owing to the rare, direct line he enjoys into the Biden White House.

O’Donnell is, unlike virtually anyone else in cable these days, riding high.

As other programs have struggled to break out of the post-Trump slump that has tanked ratings and left some shows straining to find the urgency that drove programming during the previous administration, he has found a unique role as the Biden team’s go-to anchor on MSNBC. O’Donnell’s decades-long relationship with President Joe Biden and his chief of staff, Ron Klain, has paid off handsomely, making the MSNBC host one of the White House’s only go-to news anchors and granting him rare on-camera access. That hasn’t saved him from the ratings doldrums plaguing nearly all news programs. But with Rachel Maddow’s decision to take a step back from her daily hosting duties at 9 p.m. and Brian Williams’ departure from the network this year, O’Donnell has become a surprising point of continuity.

To a degree, O’Donnell’s success in the age of Biden makes complete sense. O’Donnell has been one of Biden’s most unreserved cheerleaders over the past year, repeatedly defending his White House against criticism in the media and making sweeping declarations about the greatness of the administration. He said Biden’s discussion of his own immigrant history was historic, that the president’s Aug. 31 speech on the U.S. military departure from Afghanistan was the smartest and most honest address by a president on the subject, uncritically praised the state of the economy under Biden, and declared that the president’s first 100 days were the most consequential since FDR’s presidency.

But beyond the adulation, few, if any, cable hosts have mirrored the president’s professional arc as closely as he has.

Both are white male septuagenarians (O’Donnell hitting 70 and Biden at 79) with institutional ties to the U.S. Senate. O’Donnell first met Biden in the 1990s, when he was a legislative aide for Senator Daniel Patrick Moynihan (D-N.Y.), one of the then-Delaware senator’s confidantes. After burnishing his institutionalist credentials as a writer and actor on Aaron Sorkin’s 90s drama the West Wing, O’Donnell continued to mine his Biden connections as he rose through the ranks as a guest and later host on MSNBC. When he became a full-time host on MSNBC in 2010, the main guest during his first show was, naturally, Biden.

“Lawrence is a student of the Senate and Biden is a professor,” Rep. Eric Swalwell (D-Cali.), a frequent guest on O’Donnell’s show, told POLITICO. “The value that’s come through in the last year is now you have this shepherd who can take his audience through what it means to have a president like Biden who knows the Senate.”

The connection wasn’t lost on the then-former vice president’s team when he launched his third bid for president in 2019.

While candidates vied for prime territory on Maddow’s highly-rated MSNBC show — prompting some media outlets (including this one) to dub her the kingmaker of the 2020 Democratic primary — Biden repeatedly rebuffed interview requests by her team. He was the only candidate to never appear on her show or that of her lead-in anchor, Chris Hayes. One former campaign official told POLITICO the absence from those programs was due to the fear that they could get hammered from the left and that friendlier treatment was available from other anchors at the network.

Accordingly, Biden opted for interviews with some of the lesser-rated daytime shows, including Stephanie Ruhle’s 9 a.m. show and Morning Joe. And when he wanted to appear on MSNBC’s more highly-rated prime-time programming, he opted for O’Donnell, whom multiple former Biden campaign staffers said he favored because of their personal relationship and belief that their mutually-shared time in Congress made for a less potentially contentious interview.

“He and the president have established a good rapport, driven in part by Lawrence’s deep knowledge and appreciation of policy as a former Senate aide,” one former campaign official said.

Unlike President Donald Trump’s symbiotic relationship with Fox News — which became the main mouthpiece for the former administration and farm system for some of its staffing needs — the Biden White House hasn’t granted MSNBC the same kind of access or attention. But when dolling out one of the rare interviews to mark his 100 days in office, the White House agreed to a nearly 20-minute long sit-down with O’Donnell, the only interview the president has given on MSNBC while in office.

O’Donnell also has the ear of one of the president’s top advisers.

Following the emergence of Covid-19 in 2020, Klain became a ubiquitous presence across MSNBC, offering insights and commentary drawn from his time as former president Barack Obama’s “Ebola czar.”

The anchor who benefited most was O’Donnell, who got to know Klain when they both served as Senate aides in the ‘90s — O’Donnell for Moynihan and Klain for Biden. O’Donnell regularly invited him on his show as a guest years before the Covid pandemic made him a hot cable news commodity. Klain often appeared on O’Donnell’s program multiple times a week.

After the election, the relationship paid off with access.

“This is going to be an important time for him, but I thought about him as a very important player at MSNBC for a long time,” said Laurence Tribe, the famed Harvard law professor and regular Last Word guest. “He knows more about the Senate than almost anyone else on television.”

O’Donnell, Klain and the White House all declined to comment.

Despite his Biden connections, O’Donnell still suffers from the ratings woes plaguing cable news networks. He consistently trails Fox News’ Laura Ingraham, and the Last Word’s ratings have mirrored the declines across much of the post-Trump cable news landscape. Even on his own network, O’Donnell was outperformed by Maddow.

O’Donnell has long been seen as one of the second string players at the network. Though he cut his teeth in the TV business after his time in the Senate — helping write the hit show West Wing and even taking on a role in some flashback episodes of the program—he’s regarded internally as a solid broadcaster but not one of MSNBC’s most recognizable stars. On the day-side lineup, network brass has been enamored with Nicole Wallace, who finished off the year with the highest number of total daytime viewers in cable news (as measured between 9 a.m. and 4 p.m.).

O’Donnell doesn’t go viral online like Hayes and never developed a cultish audience like Maddow. His show isn’t on in the Senate gym like Morning Joe, and it never caught fire (or flamed out) quite as spectacularly as the one hosted by his predecessor, Keith Olbermann.

His current, secure, status represents a fascinating turnaround for a network personality who just a few years ago seemed days away from losing his job.

In 2017, the Huffington Post reported that O’Donnell had just weeks left on his contract and few clear signs of interest from the network. O’Donnell was personally liked by company higher-ups including then-NBC News Chair Andy Lack, and had posted solid ratings following Maddow’s 9 p.m. viewership juggernaut. But questions lingered in executives’ minds about whether he was truly responsible for his own success, or simply drafting off Maddow’s strong ratings. The network initially balked at his salary demand and suggested moving his program to an earlier time slot, a proposal that reportedly upset O’Donnell. But the news of his potential departure, as well as his public pleas for his viewers to tune in, seemed to work in his favor during negotiations, and he signed a multi-year deal in 2017.

When there was a change in MSNBC leadership in 2021, they became aware of possible major changes to the prime-time lineup. Hoping for some continuity, they took a less adversarial approach this year when O’Donnell was up for a new contract. Sources familiar with the details of the negotiations said that while Williams’ departure took some network executives by surprise, NBCUniversal Chair Cesar Conde and MSNBC network President Rashida Jones were aware of the looming Maddow contract negotiations, and seemed intent on re-signing O’Donnell amid the other potential major changes to the prime-time lineup.

It’s also an about-face from O’Donnell’s relationship with the previous occupant of the White House, who fostered a years-long grudge against the MSNBC host. After he called for NBC to cut ties with the then-reality television star, Trump repeatedly lobbied former MSNBC head Phil Griffin to fire O’Donnell, telling him that O’Donnell was a “third-rate anchor.”

Griffin declined to do so, Biden won office, and O’Donnell is now the steady ship in a network — and industry — experiencing its fair bit of turbulence.