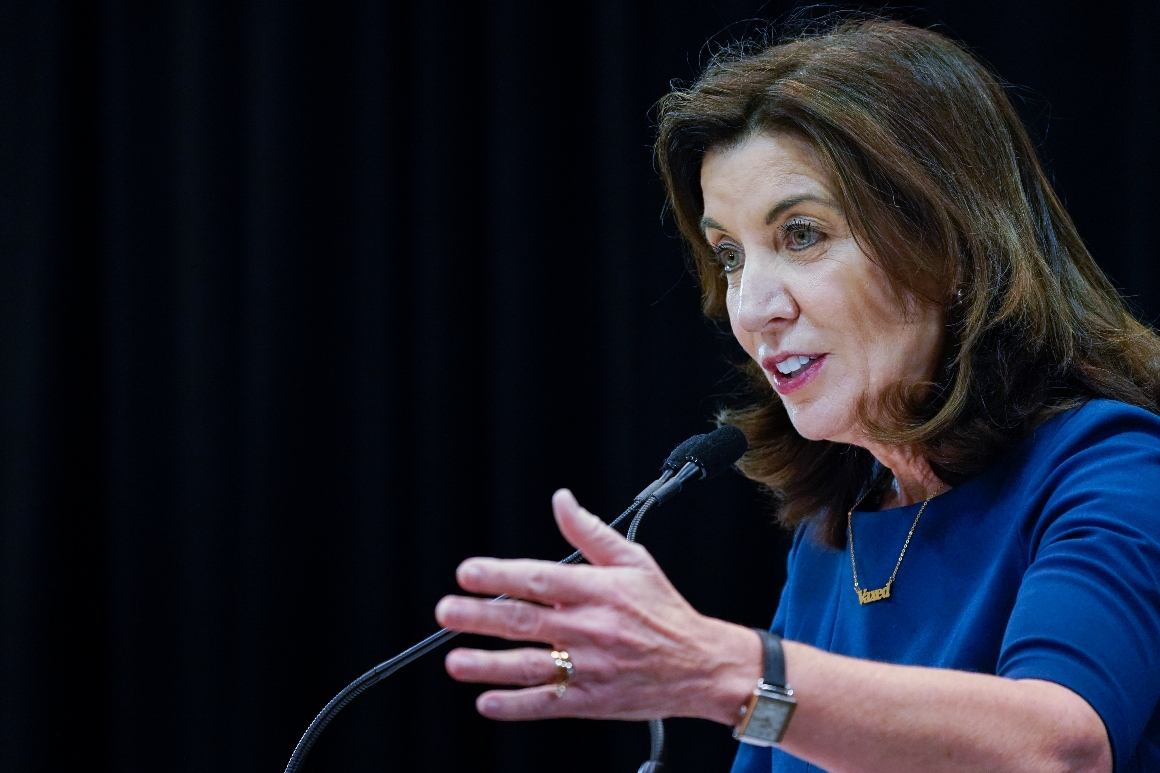 ALBANY, N.Y. — She’s been governor of New York for more than four momentous months. But Kathy Hochul will truly claim the title next week, when she becomes the first woman in New York history to deliver a State of the State speech.

The last quarter or so of 2021 has been a mop-up operation for Hochul, 63, who took over in Albany when Andrew Cuomo resigned last August. In the months since, she has had to deal with the aftermath of her predecessor’s abrupt departure and now-toxic legacy — while, at the same time, dealing with the very issue that made Cuomo a national figure, the Covid-19 pandemic.

But on Jan. 5, Hochul will set out her own legislative priorities, seeking to put her stamp on the office she inherited while invigorating her campaign to win a term in her own right in 2022.

The annual speech remains one of the highlights of New York’s political calendar, but it doesn’t carry the same grandeur it used to. Papers of record no longer print the text in full, and few people outside of state government will even notice it. But for Hochul, the speech will be a chance to define her tenure and her persona after lingering in Cuomo’s shadow for so long. And it comes just a few weeks after her main opponent in next June’s Democratic primary, Attorney General Tish James, dropped out of the race, making Hochul a clear favorite for the nomination.

“For Kathy Hochul, the speech is more important than usual, because it’s the first time she’s really speaking to the entire state — and the Legislature will be listening carefully,” said Peter Quinn, a novelist and essayist who wrote speeches for former New York Govs. Hugh Carey and Mario Cuomo.

Her predecessor bucked tradition by holding his State of the State speeches outside of the state Capitol, often in a nearby convention center and once in a six-part tour of the state. Those speeches usually were more about performance and spectacle than about governance, with Cuomo taking on the role of master of ceremonies.

Hochul, on the other hand, will deliver her speech beneath the stained-glass light of the vaulted Assembly chamber, unless Covid-19 case rates cause any last-minute change of plans. Her planned choice of venue could be as important as the words she will speak, said Bob Bellafiore, an Albany-based communications consultant who was former Gov. George Pataki’s press secretary and speechwriter. Addressing lawmakers on their home turf has the prosaic but important effect of relinquishing control of the program to Senate and Assembly leaders.

“One, it sends a message to the Legislature that you respect their role in the process,” Bellafiore said. “And two, in her case, it says ‘I’m not Cuomo.’ Frankly, that’s probably 50 percent of her message.”

It won’t be a one-woman show, Hochul told reporters during a virtual briefing Dec. 16. Everything from the scaled-back invite list to the policy proposals she’ll push are being developed in coordination with legislative staff and leaders, she said.

Technically, Hochul doesn’t have to give a speech (just as the U.S. president isn’t obliged to deliver an in-person State of the Union address). In the 19th Century and into the 20th, governors tended to send written messages to the Legislature to fulfill their constitutional duty to keep lawmakers updated. Presidents beginning with Thomas Jefferson did the same until Woodrow Wilson delivered his message in-person to Congress in 1913. New York Gov. Al Smith recognized a good thing when he saw it and delivered his annual message in the form of a speech to the Legislature in 1923. Governors have been doing so ever since.

Hochul has branded herself an earnest and forthright speaker, but so far hasn’t captured the public’s imagination with flowery rhetoric nor has she sought extra minutes onstage for the sheer sake of a soliloquy. Her virtual inaugural address was 11 minutes long.

That penchant for brevity might be in competition with an agenda she’s already vowed will extend through all corners of state government.

She wants to “overhaul” New York’s 64-campus public university system and turn the state’s beleaguered ethics board — the Joint Commission on Public Ethics — “upside down.” In September she promised state business leaders new regional economic development funds and job training programs linking workers to their industries. In November she told Manhattan business leaders that her State of the State speech would include her vision for electric vehicle infrastructure and a plan to make New York “the epicenter of the offshore wind systems.”

She said earlier this month that one of her “highest priorities” would be increasing training and recruitment for the health care workforce, which has been crippled by the pressures of Covid-19 and a vaccination mandate. She also promised a “bold and ambitious plan” to let more New Yorkers vote by mail.

A good State of the State address takes those policy initiatives and weaves them into one primary storyline, said Quinn. But the first order of business was always to sort through the jargon-filled proposals speechwriters received from the policy wonks.

“They send you these documents, and they’re pretty dreadful,” he said. “We [speechwriters] used to refer to ourselves as the sewer treatment plant. You put all of that into English and you organize it so it’s coherent. It’s a political document to lay down the guardrails for the state.”

Hochul is working with a team on the speech, but she is the “chief architect” of the address, according to her office. The deeper details of Hochul’s agenda, where disagreements are more likely to fester, are unlikely to emerge until she releases her state budget proposal a few weeks later.

“The State of the State is a vision document; the budget is the battle plan,” Bellafiore said.

Every State of the State requires a bit of bluster to rally political energy, but conditions to actually achieve any goals Hochul lays out are uncharacteristically on her side this year.

For the first time in years, the main story line will not include the caveat that New York is short on cash, Quinn noted.

Federal stimulus money has temporarily filled some existing holes in education and health care, and in October an update to the state’s financial plan said that New York will probably have $3.8 billion more coming in than officials projected earlier in the year.

Hochul said the state has enough money to balance its budget through 2025, and to finally begin increasing reserves to a more logical holding of 15 percent of state spending in case of future crises.

A massive infrastructure investment signed by President Joe Biden last month will speed up dithering road and rail projects across the state — visible achievements that voters may attribute to elected officials on both state and federal levels.

An additional big-ticket political win in the Legislature could go a long way in Hochul’s reelection campaign, but policy priorities are nothing without lawmakers’ buy-in.

Hochul’s success, then, may depend on her perceived competence and her collegiality in negotiating a state budget, a historically contentious process between the executive and legislative chambers that Cuomo dominated to his political benefit.

While voters don’t see the ins and outs of legislative interplay, elected officials, donors and business groups do. January begins an evaluation of Hochul’s ability to make good on her promises. First impressions matter, said Quinn. That may start with her first State of the State speech, the one that will garner the most attention and interest.

“Whereas, if she’s a governor for eight years, seven years from now, they’ll be putting down sleeping bags in the [Assembly] chamber,” he said.