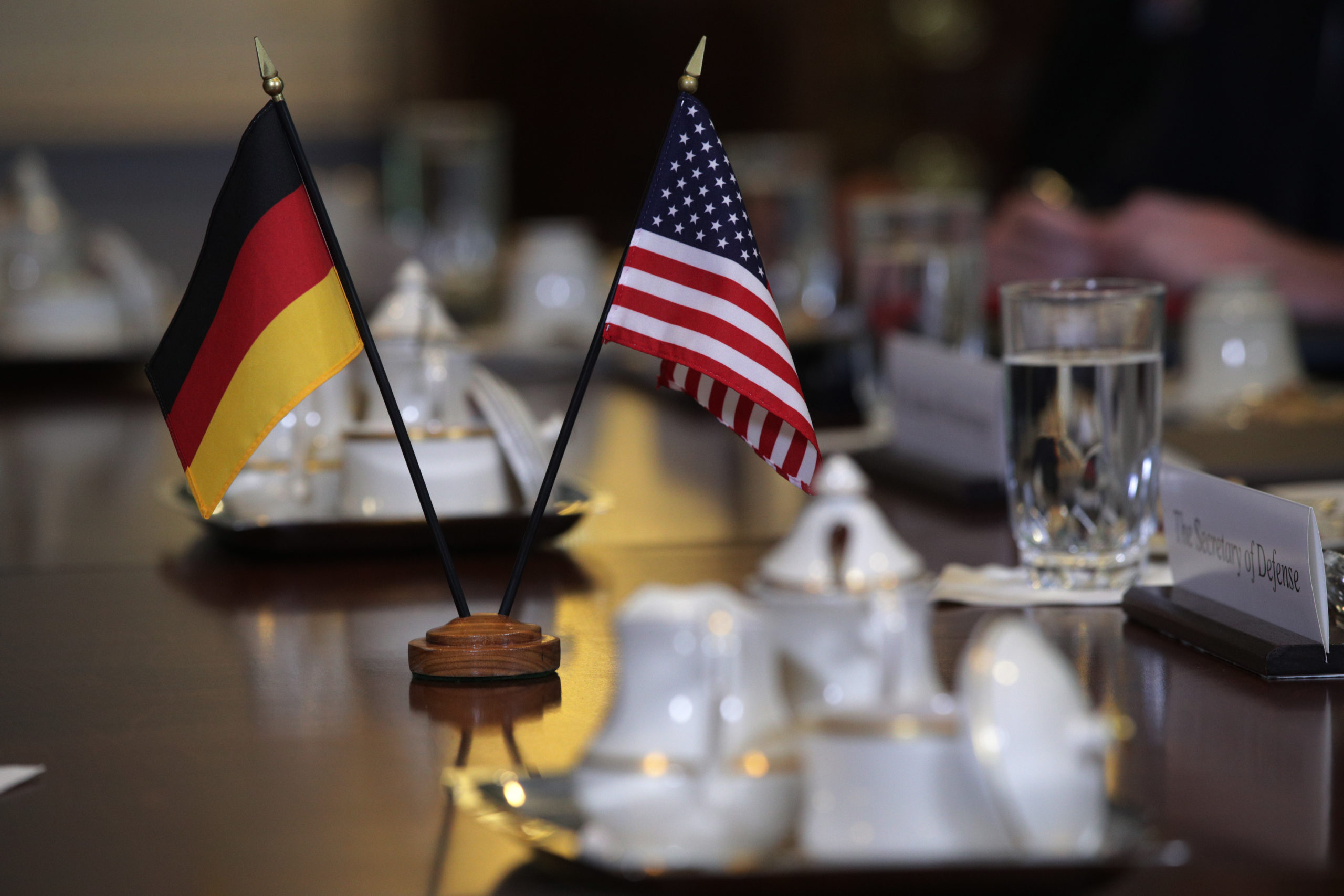 BERLIN — Over the past decade, the idea that Germany could no longer fully rely on the U.S. for security amid America’s “pivot” to Asia became accepted wisdom among German leaders.

The unfolding crisis in Ukraine reveals that reality cuts both ways.

Germany’s allies hoped Olaf Scholz’s coalition, which includes the Russia-critical Greens, would back away from the accommodative policies toward Moscow that marked the Angela Merkel era. Recent days have shown such optimism to be misplaced.

As Washington has tried to present a united Western front against Russian intimidation in recent weeks, Germany has been a conspicuous outlier. Under the influence of a potent cocktail of energy and commercial interests, and a political culture laced with good old-fashioned anti-Americanism, Germany has strayed from the Western fold.

To outward appearances, Berlin is far from AWOL on Ukraine.

“After years of rising tensions, staying silent isn’t a sensible option,” Chancellor Scholz said on Wednesday in reference to Russia’s amassing of troops on the Ukrainian border, stressing that Germany was committed to Ukraine’s territorial integrity.

“It’s hard not to see this as a threat,” Foreign Minister Annalena Baerbock said of the border buildup on a trip to Moscow this week.

But when the cameras are turned off, Germany’s tone changes.

While the U.K. scrambles to deliver tanks, rocket artillery and other weaponry to the Ukrainians, Germany has refused to send even rifles.

And instead of locking arms with the U.S. and other transatlantic allies to help Ukraine prepare for an attack, Germany has sought to placate Russia by taking some of the West’s most powerful deterrents off the table.

As the crisis has intensified, German officials and politicians have strenuously opposed using the threat of suspending Russia from SWIFT, the Belgium-based international payments system, a step that would make it extremely difficult for Russian entities to engage in international commerce.

Even Germany’s conservative opposition cautioned against using SWIFT as a bargaining chip. Friedrich Merz, leader of the center-right Christian Democrats, said suspending Russia’s access to the network would be the financial market equivalent of dropping an “atomic bomb.”

While Scholz has signaled that halting Nord Stream 2, a natural gas pipeline between Germany and Russia awaiting final regulatory approval, would “have to be discussed” if Russia invades Ukraine, he has stopped well short of pledging to do so.

So what’s Berlin’s plan? Germany’s big idea for resolving the Ukraine crisis is to revive a dormant diplomatic process known as the Normandy Format that includes Germany, France, Russia and Ukraine but, notably, not the U.S. (That same gathering came up with the so-called Minsk accords, a failed effort to halt the fighting in eastern Ukraine.)

Pipeline politics and the affinity many German elites hold for Russia are often cited to explain Berlin’s steadfast refusal to take a harder line toward Russia.

Those factors are significant, yet insufficient to explain why Germany increasingly does not consider its interests to be in sync with those of the U.S. and the wider transatlantic alliance.

In fact, Germany’s drift away from the U.S. reflects a deeper shift that began with the Iraq War and has continued in fits and starts ever since, most significantly during Donald Trump’s presidency.

Trump’s regular taunting of Germany (he accused the country of not pulling its weight in NATO and trying to take advantage of the U.S. more generally) left deep scars.

While there was some merit to Trump’s complaints (which had been made less vociferously by previous administrations), it’s also true that NATO doesn’t function that well without the active participation of Europe’s largest country. Germany’s geographic position alone makes it a linchpin in the alliance.

So in an effort to repair the damage, President Joe Biden made courting Germany an early priority. He canceled Trump’s plan to pull out almost all American troops from Germany, invited then-Chancellor Merkel to the White House, and waived sanctions on Nord Stream 2, which the U.S. and other NATO allies fear would hand Moscow a powerful tool to intimidate Europe.

He even appointed several Germanophiles to key positions in his administration, most notably Assistant Secretary of State for Europe Karen Donfried, the former president of the German Marshall Fund of the United States, a think tank started by the German government.

The combination of Trump’s departure and Biden’s overtures had an almost instant effect on German public opinion (in a poll conducted over the summer, more than 70 percent of Germans said relations with the U.S. were “good” or “very good”).

Convincing elites has been more challenging.

Germany’s new coalition has been vague about whether it will adhere to NATO’s defense spending goals for its members, targets Germany has missed for years. The only real accommodation the new government made to Washington has been a pledge to replace the country’s aging fleet of nuclear bombers, a move that’s arguably more in Germany’s interest than the U.S.’s.

Bruce Stokes, a visiting fellow at the German Marshall Fund of the U.S., who has spent years studying transatlantic attitudes, recently conducted more than 50 interviews, including a number with Germans, on the state of the alliance. The results suggest recent disputes over AUKUS (the new alliance between Australia, the U.K. and the U.S.) and the hasty U.S. withdrawal from Afghanistan have continued to fray the relationship.

“Anxiety, skepticism and bad juju around the pivot to Asia is prevalent everywhere in Europe,” a Berlin-based interviewee told Stokes. “The fear is that it will lead to transatlantic decoupling.”

At street level, that process appears to be well underway.

A good way to gauge German attitudes toward the U.S. is to look at what people are reading.

On a shelf dedicated to American issues at downtown Berlin’s largest bookstore, the following titles were recently on prominent display:

“Crazed, The American Catastrophe;”
“America’s Holy Warriors;”
“What the U.S. has Perpetrated Since 1945;” and
“America on Fire.”

The first two are bestsellers that typify Germany’s growing distrust of all things American. In this growing genre, the U.S., which rehabilitated Germany after World War II and has guaranteed its security ever since, is not a model but a cautionary tale.

“America under Trump was a preview of what the future might hold,” warns Annika Brockschmidt, the author of “America’s Holy Warriors,” an account of what the author sees as the insidious influence of religion on American politics.

While there’s no denying the political polarization that characterizes American politics or the racial tensions that have defined its history, Brockschmidt portrays the country as a kind of dystopian hellscape, a notion that is gaining currency in Germany in Trump’s wake. Her recently published bestseller depicts the U.S. as a broken democracy threatened by a well-organized cabal of bible-thumping white supremacists.

Until World War II, German views of the U.S. were largely shaped by the vivid travelogues of Karl May, a 19th-century conman turned bestselling adventure writer whose depictions of the American West and its inhabitants captured the imagination of generations.

Most readers never knew May’s secret: He hadn’t visited any of the places he described, and never befriended Apache warriors and cowboys, much less experienced anything close to the adventures he recounted.

May died more than a century ago, but his spirit lives on in the work of Brockschmidt, a 29-year-old historian and journalist. If May tapped into Germans’ desire to explore foreign lands most readers would never see, Brockschmidt appeals to a baser instinct: anti-Americanism.

Over more than 350 pages, Brockschmidt takes readers from the steps of the U.S. Capitol on January 6 last year to a Trump rally in Iowa to the front lines of America’s culture wars to argue that America is hurtling toward “Christian nationalism.”

“Their God is not soft or forgiving, but rather revengeful and militant,” she writes in what might best be described as a diatribe against what she sees as the true American Way of Life.

Brockschmidt’s fire and brimstone are all the more striking given that she appears to have painted her portrait of America without visiting the U.S. or even having spoken to the subjects of her book — the “holy warriors” supposedly driving America to perdition (the only one-on-one interviews cited are with a handful of academics).

Asked several times by POLITICO in writing whether she had researched the book in the U.S. or ever spent any time there, Brockschmidt didn’t respond (she provided written answers to other questions, but declined an interview request).

Brockschmidt, who was recently named one of Germany’s top 30 journalists under 30 (thanks to her “deep political analyses”), holds a master’s degree in history with a focus on “war and conflict.” She has described her interest in America as a “hobby.”

To American eyes, Brockschmidt’s work is an obvious caricature.

Data that contradict her narrative of a creeping radical Christian takeover of the U.S. were simply ignored.

For example, Brockschmidt cites findings from the Pew Research Center on religion and other areas 34 times. Conspicuously absent from her report is a study published last year by Pew showing a precipitous decline in the number of Americans in both parties who consider that being Christian is important to being “truly American.”

The questionable provenance of Brockschmidt’s book hasn’t hurt its sales. She recently appeared on one of Germany’s highest-rated talk shows to plug her book and discuss America’s dysfunction with Sigmar Gabriel, the former foreign minister. She is also a regular on Germany’s podcast circuit.

Brockschmidt is far from the only one predicting an American apocalypse. Yet the success of her tendentious tome suggests these voices are telling Germans exactly what they want to hear.

Anti-Americanism is about as new to German politics as the influence of Christianity is to America’s. It has always been hot in times of tension, be it the Vietnam War, the debates over nuclear missile deployments in the Cold War, or the U.S.’s War on Terror.

In the past, the U.S. always had strong defenders, both in the political realm and in the public at large. Today, those voices are rarer.

That should worry Washington. For all the talk of the need to concentrate on China, Europe — with Germany as its fulcrum — remains essential to America’s continued prosperity.

On Thursday, U.S. Secretary of State Antony Blinken is expected in Berlin for consultations with German and European counterparts and to a deliver keynote address at an event titled “Why We Need Each Other – Strengthening the Transatlantic Partnership.”

Both the title and the venue betray a worrying reality.

When President Barack Obama first articulated the U.S. pivot to the Pacific in 2009, he believed Germany would have America’s back on the European continent.

If he were to look over his shoulder today, he’d see no one there.