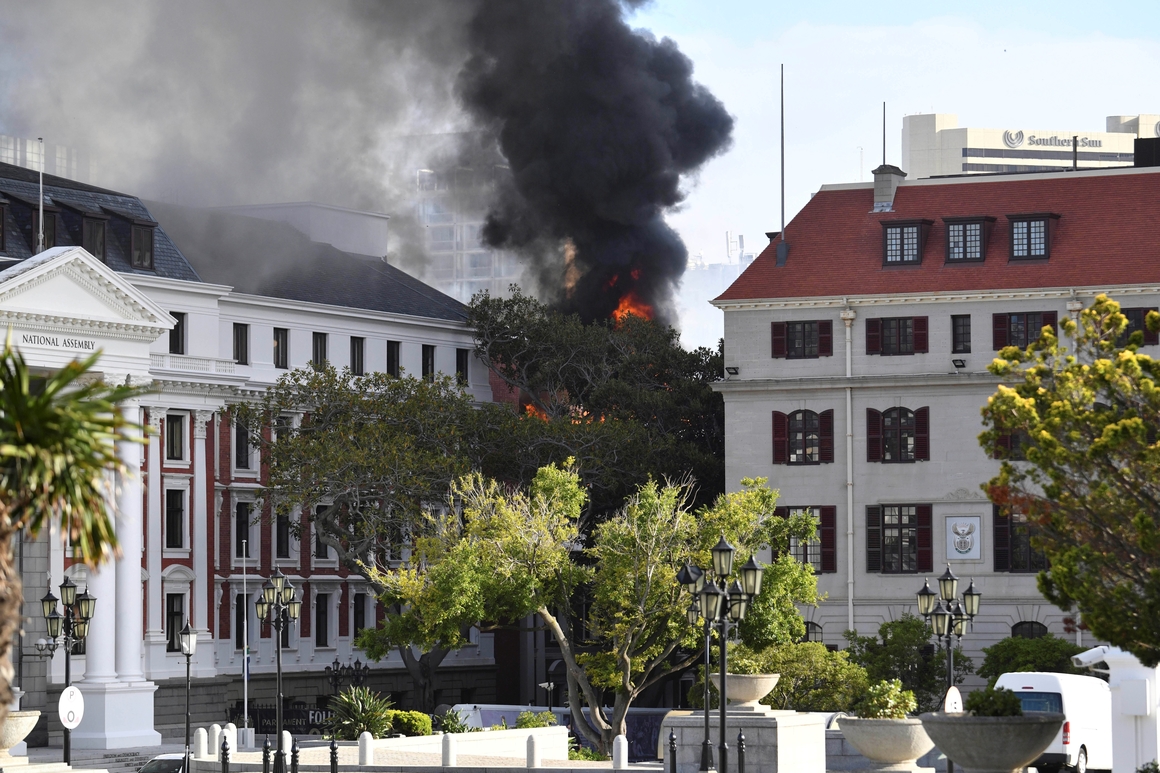 CAPE TOWN, South Africa — Firefighters battled a major blaze at South Africa’s Parliament complex on Sunday that sent a dark plume of smoke and flames into the air above the center of Cape Town and caused some ceilings of the building that houses the national legislature to collapse.

The fire started on the third floor of an old building that houses offices and spread to the National Assembly building, where South Africa’s Parliament now sits, Minister of Public Works and Infrastructure Patricia de Lille said.

“The fire is currently in the National Assembly chambers,” De Lille told reporters at the scene. “This is a very sad day for democracy for Parliament is the home of our democracy.”

City of Cape Town Fire and Rescue Service spokesman Jermaine Carelse said no injuries were reported. Parliament was closed for the holidays.

Security guards first reported the fire at around 6 a.m., Carelse said, and 35 firefighters were on the scene. Some of them were lifted into the Cape Town skyline on a crane to spray water on the blaze from above.

They were still fighting the fire more than six hours later.

South African President Cyril Ramaphosa was briefed on the fire, De Lille said, but it was too early to speculate on a cause. She said authorities were reviewing video camera footage.

The deputy minister of state security was also at the Parliament complex. Parliament speaker Nosiviwe Mapisa-Nqakula cautioned against speculation that it was a deliberate attack.

President Ramaphosa and many of South Africa’s high-ranking politicians were in Cape Town for the funeral service of Archbishop Desmond Tutu, which took place on Saturday at the city’s St. George’s Cathedral, about a block away from the Parliament precinct.

The precinct has three main sections, the original Parliament building completed in the late 1800s and two newer parts built in the 20th century.

The fire initially was concentrated at the old Parliament building, which is located behind the National Assembly, De Lille told reporters in front of the Parliament complex gates. During that briefing, she said firefighters “have the situation under control,” but the fire spread soon after and tore through the current Parliament building.

Authorities feared that others parts of the buildings in the precinct might collapse because of the heat while historical artefacts inside were likely to be damaged or destroyed. The top part of the bright white National Assembly building had been burned black as smoke billowed out its roof.

“The bitumen on the roof is even melting, an indication of the intense heat. There have been reports of some walls showing cracks, which could indicate a collapse,” News24 website quoted Carelse as saying.

Police cordoned off the complex and closed roads. Some of the blocked-off areas were near where people had left flowers and other tributes to Tutu.

A huge wildfire on the slopes Cape Town’s famed Table Mountain last year spread to buildings below and destroyed part of a historic library at the University of Cape Town.