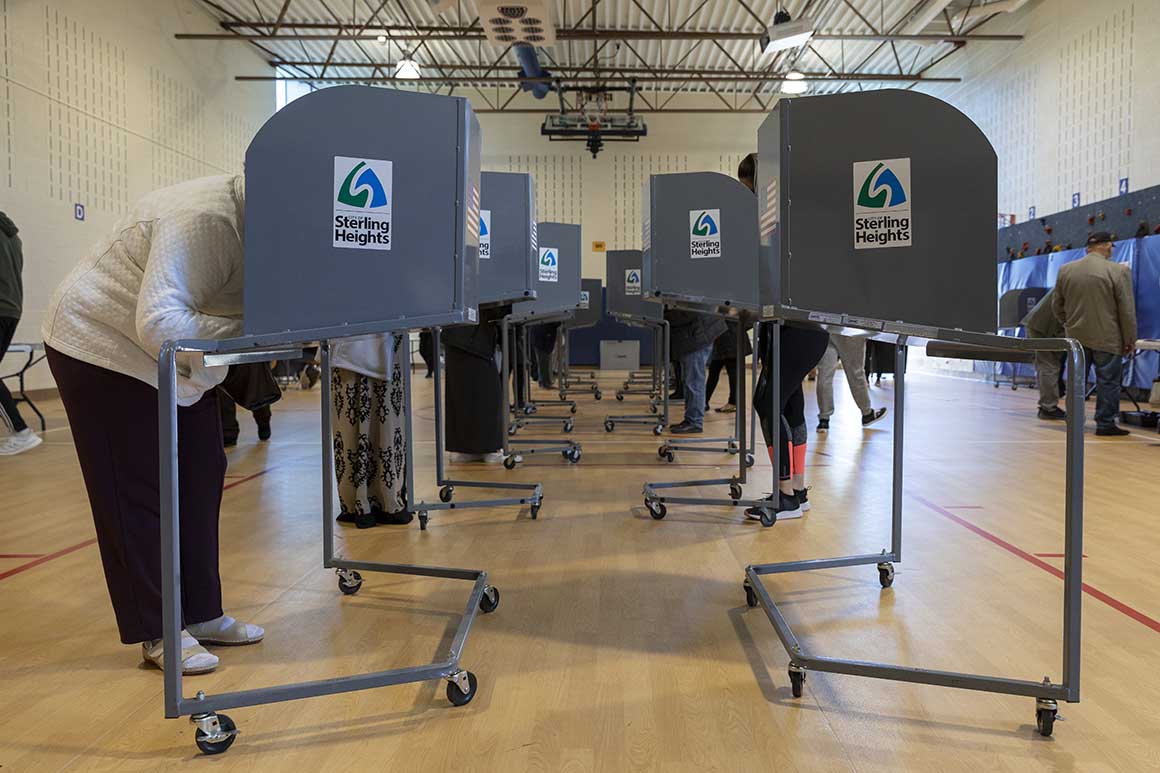 House Democrats think they have found an ideal candidate to run in a newly created Detroit-area swing seat: a telegenic young mayor of the fourth-largest city in the state who is also a lawyer with deep Michigan roots.

There’s just one problem in his biography: Until 2020, he was a lifelong Republican.

The Democratic Congressional Campaign Committee is drafting Sterling Heights Mayor Michael Taylor — who publicly denounced then-President Donald Trump two years ago — as a recruit in a battleground where the GOP is close to landing one of their most sought-after candidates, according to more than a half-dozen Democrats involved in the talks.

But the effort to woo the newly anti-Trump mayor has caused consternation among some Michigan Democrats, particularly labor groups, who are furious their party would consider someone who not only backed Trump in 2016 but endorsed likely GOP candidate John James in James’ 2018 bid to oust Democratic Sen. Debbie Stabenow. Taylor is not the only one on DCCC’s list. Still, the spat over the candidate recruitment underscores the depth of Democratic efforts to save as many House seats as possible, despite widespread pessimism they can hold the majority after the November elections. And it is reopening a debate over how closely Democrats should embrace Republicans who have abandoned the GOP over Trump’s extraordinary conduct as welcome converts in their party.

To his backers, Taylor, 38, is viewed as potentially their best chance to compete in a critical battleground seat that Trump would have carried by less than 1 point in the 2020 election

“It’s very important for me that we get a great candidate there that’s a great fit for the district,” said Rep. Andy Levin (D-Mich.), who pointed to Taylor’s “political evolution” and what he called a good working relationship on issues in Macomb County. “He’s certainly one of the possibilities.”

Taylor has begun making calls to Democrats in the district about a potential run, according to people familiar with those conversations.

But he is not the only candidate being approached by the House Democrats’ campaign arm in the district. More traditional candidates, such as former state Sen. Steve Bieda, Macomb County judge Carl Marlinga, and Warren Council Member Angela Rogensues are on the national Democrats’ candidate list, according to people familiar with the talks. So is Huwaida Arraf, an attorney and Palestinian American, who is already running.

“The DCCC is in communication with many Democrats and local leaders on the ground. We’re committed to electing a Democrat in this district in November,” DCCC spokesperson Elena Kuhn said. And people close to the DCCC said the campaign arm has no plans to endorse in the primary.

Taylor also declined to answer questions about his potential run, telling POLITICO only: “I think everybody’s interested to see what’s going to happen.”

Still, several members of Michigan’s delegation described a brewing backlash on the left as their own party pursues a candidate who publicly declared as recently as 2013 that he opposed abortion rights and Obamacare and supported right-to-work laws reviled by unions. Labor groups are particularly incensed that Democrats would back such a candidate in a district that includes the heart of the auto industry, according to multiple people familiar with the private discussions.

A Facebook post from 2013, outlining all those positions, made the rounds in the Detroit-area Democratic circles shortly after Taylor emerged as a potential candidate.

“A baseline for Democrats is, ‘Do you support workers rights? Are you against right to work?’” said Chris Harthen, a former organizer at the UFCW Local 876. “When you have a politician who not only is against those things, but has supported somebody like Donald Trump in the past — I mean that’s just a bridge too far.”

“Somebody in some fancy office in D.C. gets to tell what is a predominantly working- and middle-class district who their candidate is going to be?,” Harthen added. “Not the least of which, a guy who was just a minute ago Republican.”

Taylor’s views on those issues have since evolved, according to a Democratic operative familiar with his thinking. He now supports abortion rights, would not repeal Obamacare but believes it can be improved and does not support right to work laws after interacting frequently with unions as mayor.

The recruitment efforts raises a larger questions about how closely House Democrats want to tie themselves to the shrinking anti-Trump faction of the GOP. While they are eager to tout defectors like Reps. Liz Cheney (R-Wyo.) and Adam Kinzinger (R-Ill.) on their support for the Jan. 6, 2021 riot investigation, those GOP lawmakers still vote with their party the vast majority of the time — including blocking Democratic policy priorities.

Some Democrats say the limits of their so-called “big-tent” party could soon be tested with a candidate like Taylor, who has not publicly made clear if his stance on social issues has shifted, even as his allegiance to Trump did.

“This guy Taylor, I mean I don’t know him, but he’s a Republican,” said David Hecker, president of AFT Michigan, the teachers union. “It wouldn’t be our choice at all. The problem is, ‘Who?’”

“This shows the disconnect between the Washington Democratic Party elite and the activists at the grassroots level,” added Sterling Heights City Council Member Henry Yanez.

Others, though, insist that the goal should be simply winning the newly drawn 10th District. The seat, which includes the blue collar stronghold of Macomb County, has been tilting redder for decades, and some Democrats privately said the party should be willing to embrace Taylor as a Democrat — albeit a conservative one — if it means beating James.

Sen. Gary Peters (D-Mich.), who has a keen interest in Macomb County, which he carried during his reelection bid against James in 2020, has also made a personal pitch to Taylor, according to multiple sources. (Taylor also endorsed Peters in that statewide race.) Levin and Rep. Haley Stevens (D-Mich.) have spoken to Taylor about a potential run as well, according to a source familiar with those conversations.

Peters’ campaign team noted that he has been talking to multiple “stakeholders and officials” in the district, part of an effort to make sure Democrats have the best possible candidate. “Sen. Peters will be supporting whomever the Democratic nominee is,” a spokesperson said.

Republicans have been desperately recruiting James, who twice lost statewide bids for Senate but is viewed as a star recruit of the midterms. Luring James into Congress has been a top priority of House Minority Leader Kevin McCarthy, and the party’s top super PAC commissioned polling showing him with a commanding lead in the district.

Taylor shot onto the national stage shortly before the 2020 election, when the former Trump voter revealed that he picked Biden this time instead. In local interviews since then, Taylor has said he has no party affiliation, and his mayoral races have been nonpartisan.

But he has made clear that he supported Trump in 2016, and some Democrats worry that alone would make him toxic to primary voters.

“He voted for Trump after the ‘Access Hollywood’ tape came out? How do you think that’s going to play in a Democratic primary? Because he didn’t renounce Trump until 2020, he owns everything that Trump did until that point,” said one Democratic consultant involved in Michigan races.

Some Michigan lawmakers also privately vented they weren’t consulted in the extraordinary step to seek a newly converted Democrat. Many Democrats on the local level, too, said they never heard from the national party about the effort.

“No one at the national level has reached out to me about it,” said Ed Bruley, chair of the Macomb County Democratic Party, though he added he doesn’t have a position on Taylor. Bruley said he “would welcome” anyone who can win the seat for Democrats.