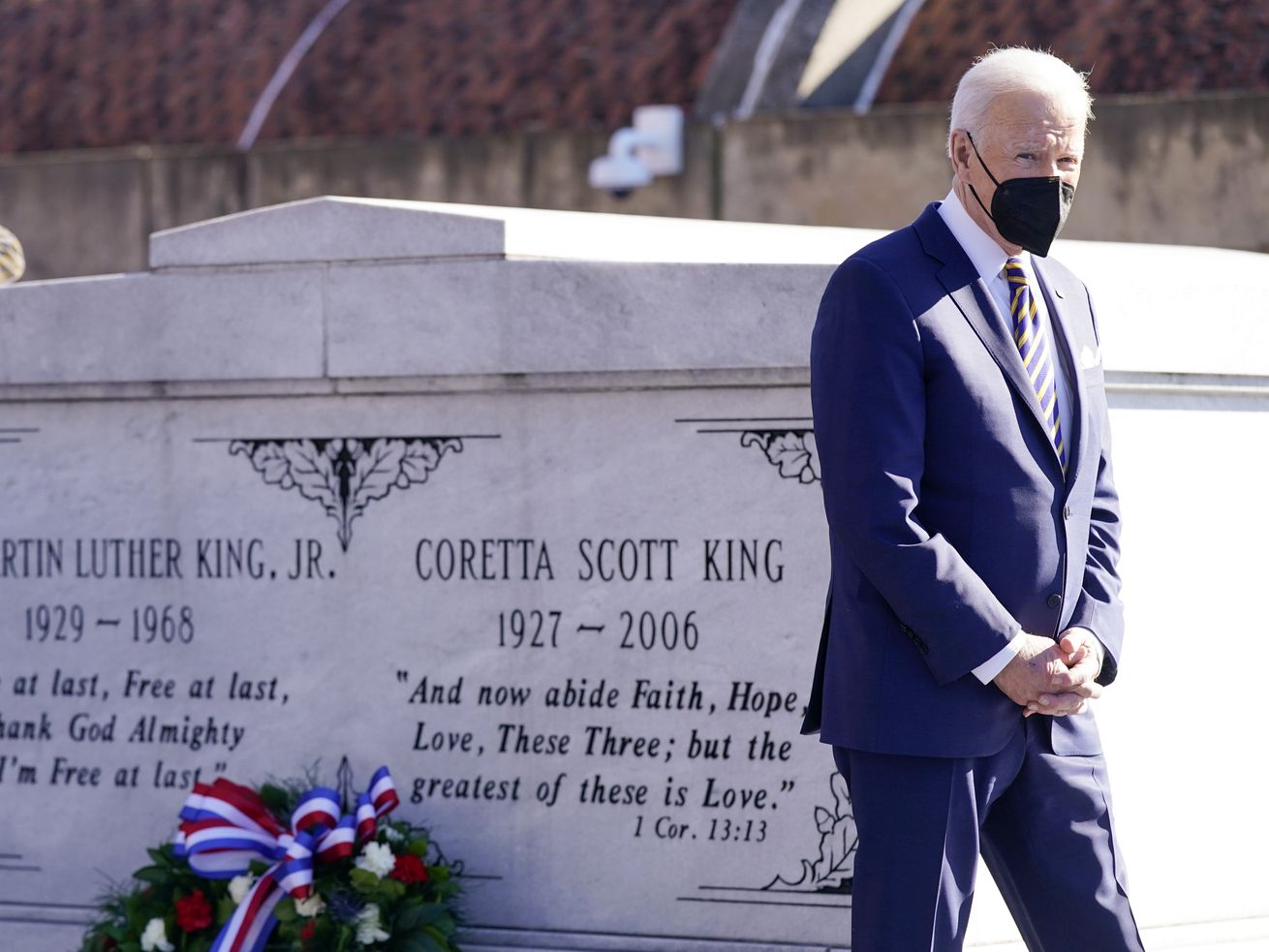 President Joe Biden walks past the tombs of the Rev. Martin Luther King Jr. and his wife Coretta Scott King after a wreath-laying ceremony in Atlanta, Georgia, on January 11. | Patrick Semansky/AP

On Tuesday, President Joe Biden took his most aggressive stance on the filibuster yet, stressing his support for a carveout in the Senate’s rules to pass voting rights legislation.

“The next few days, when these bills come to a vote, will mark a turning point in this nation’s history,” Biden said during a speech in Atlanta. “The issue is: Will we choose democracy over autocracy, light over shadow, justice over injustice? I know where I stand.”

While Biden’s strong statement of support for filibuster reform was a notable sign of the president — and his party’s — evolution on the issue, it’s unlikely to change Democrats’ difficult legislative reality.

Early in his presidency, Biden was hesitant to push for an exception to the rules around the filibuster, a mechanism by which a senator can block essentially any legislation unable to receive 60 votes in its favor. But he’s changed his mind in the face of Republican opposition to voting rights legislation, including the Freedom to Vote Act, which Democrats hope to pass this month. With the filibuster intact, the GOP will be able to block that bill, just as they have blocked other Democratic priorities, from legislation to investigate the January 6 insurrection to efforts to bolster unions.

Democrats need every member of their narrow 50-person majority on board to pass a Senate rules change. But Biden’s new embrace of filibuster reforms is not expected to sway moderates like Sens. Joe Manchin (D-WV) and Kyrsten Sinema (D-AZ), who have been resistant for months. Less than 24 hours before Biden’s speech, Manchin told CNN he didn’t approve of passing any of Democrats’ current reform proposals, which include the carveout Biden advocated for on Tuesday, along party lines.

This dynamic has prompted several voting rights groups — including the New Georgia Project Action Fund, Black Voters Matter Fund, Asian American Advocacy Fund, and GALEO Impact Fund — to boycott Biden’s speech on Tuesday. The groups argue the president’s efforts would be better served in directly pressuring moderate lawmakers in Washington, rather than doing what some described as another “photo op” in Atlanta.

“We don’t need another speech. We don’t need him to come to Georgia and use us as a prop. What we need is work,” Cliff Albright, co-founder of the Black Voters Matter Fund, told CNN.

This speech, the second in a series of fiery remarks Biden has given about the existential threat that US democracy faces, is intended to push more reluctant senators to support the rules changes needed to pass voting rights bills. Lawmakers like Manchin and Sinema, however, don’t seem receptive to such pressure — and activists emphasize that they’d still like to see Biden doing more, including focusing his energies on whipping Senate votes.

The ongoing resistance from moderate senators underscores the limitations of what Biden’s rhetoric can accomplish, if speeches like this aren’t paired with substantive change in the Senate.

Biden is now taking a much more aggressive stance

Over his first year as president, as it became clear that Republicans were committed to repeatedly blocking voting rights and other priorities, Biden has gradually become more open to the idea of filibuster reform.

In March 2021, Biden said he’d support reinstating a talking filibuster, which requires senators to continuously hold the floor and make speeches if they want to block a bill. In October, Biden said he backed “fundamentally alter[ing]” the filibuster to make progress on certain issues. And in December, he said he’d be willing to consider a carveout to the filibuster to pass a voting rights bill.

As president, Biden’s more aggressive position is an important one. He’s the leader of his party, and his evolution ramps up the pressure on moderate Democrats. Biden is also a 36-year veteran of the Senate who has often praised the value of bipartisanship. This gives moderate Democrats a framework, and even political cover, for changing their minds on the issue.

Still, the president can’t make changes to the filibuster himself or force Congress to do so. Instead, he can leverage his role to drum up attention and personally use his influence to lean on moderate senators. And that’s what Biden hopes to do with his speech.

Whether these efforts will end up working is uncertain. In 2013, President Barack Obama reportedly made persuasive calls to senators who were deciding whether to blow up the filibuster to pass more circuit and district court nominees. As Manu Raju wrote for Politico at the time, Obama’s calls were part of a final push for the rules change:

As some of his fellow Democratic senators remained on the fence, [Senate Majority Leader Harry] Reid called in a heavy hitter to close the deal: President Barack Obama, according to sources familiar with the matter. Obama personally called senators on Wednesday to back the move, and Reid ultimately won the vote on a slim margin, 52-48. Just three Democrats broke with Reid: the retiring Carl Levin of Michigan, the moderate Joe Manchin of West Virginia and the vulnerable Mark Pryor of Arkansas.

Of course, Democrats had a larger majority at that time, and there were still holdouts — including Manchin — who were not swayed by any of the pressure they faced. Biden faces a much narrower Senate majority now, and his influence may only go so far with lawmakers who’ve repeatedly said they aren’t open to these rules changes.

Activists have emphasized this week, however, that they feel Biden needs to use his platform to further home in on the moderate holdouts and deliver results.

“If he is saying the next seven days is going to be historic and critical, he’s got to fully lean in after he gives the speech, having the kinds of meetings, finding out from Manchin what exactly it’s going to take, and being very direct and forceful — just as forceful as he has been on infrastructure and on some other issues,” Albright told CNN.

The president’s rhetoric signals an important change, but probably won’t be enough

The president’s rhetoric could convince some moderates who have been merely noncommittal about revising the filibuster, like Sen. Mark Kelly (D-AZ). But while Biden’s speech helps set the tone on the issue, it isn’t expected to persuade the moderates who’ve been the most skeptical of filibuster reform.

Manchin and Sinema have repeatedly stressed the need to preserve the filibuster, even in recent weeks. Because of their longstanding opposition, a carveout to the filibuster for voting rights is likely off the table.

Manchin has also said he’d be interested in a “bipartisan” rules change. Such a change is unlikely, as Republicans are unlikely to back any reforms, including modest ones. Sinema, meanwhile, has reiterated that she’d like to keep the 60-vote threshold for votes on bills.

Some Democrats hope Manchin and Sinema might be convinced to accept other, less expansive filibuster reforms, which could apply to voting rights legislation and other bills. Those might include reinstating the talking filibuster and forcing members of the minority to put up 41 votes to block bills, rather than making the majority put up 60 votes to advance them. At the moment, neither senator has fully backed either option, though they’ve signaled openness to considering them.

Such reforms, while they would make it more difficult to block bills, would offer no guarantee that voting rights legislation would actually pass. That would leave Biden exactly where he is now: unable to advance most legislation, because the Democratic Senate majority is so narrow. Unless he can find a way to get through to moderates holding onto the filibuster, Democrats will continue to struggle to pass bills, and Biden will see his agenda facing the same impasses it is now.