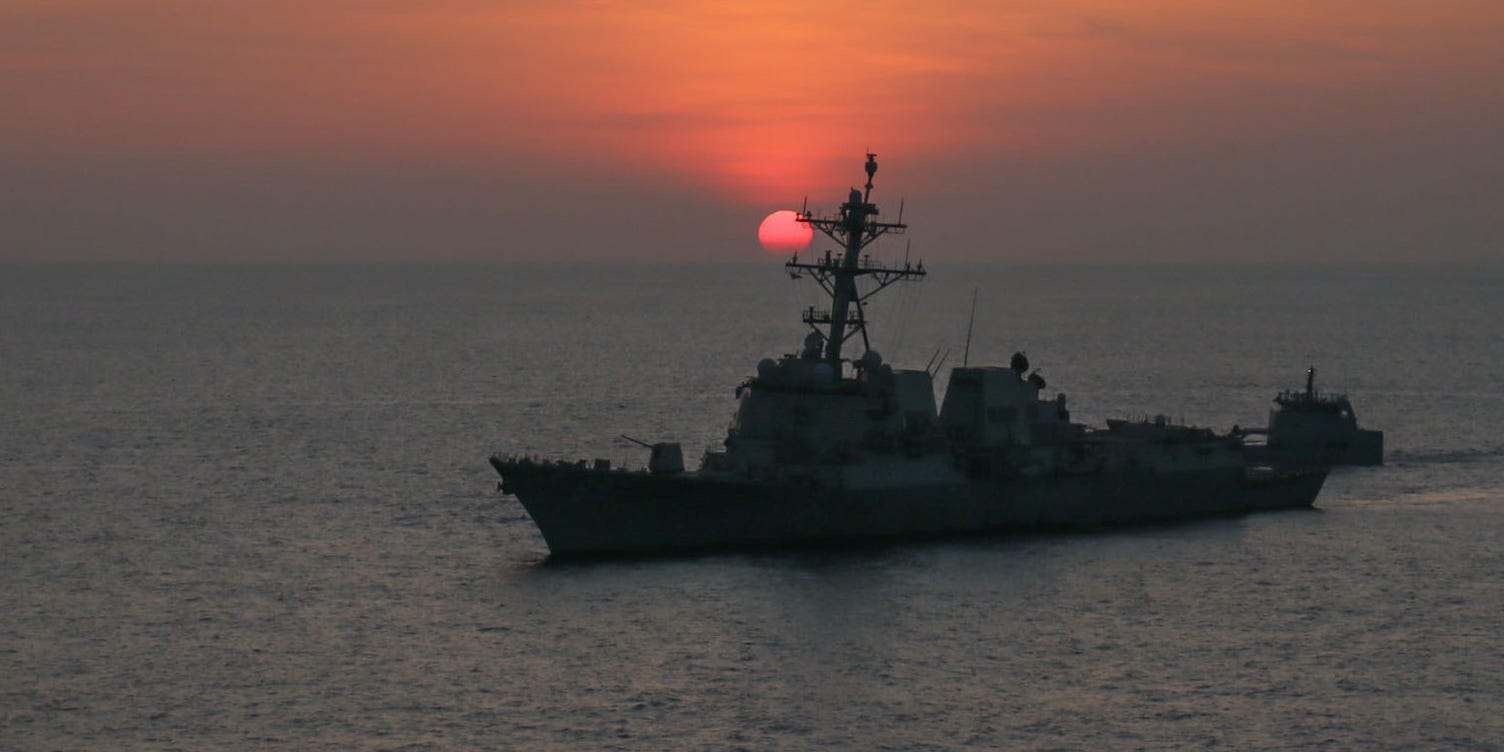 USS Mustin sails with a Guatemalan navy ship during an exercise in the Eastern Pacific Ocean, October 14, 2021.

A close encounter with a Chinese aircraft carrier has become a point of pride for the crew of a US Navy destroyer, a top US admiral said Tuesday.

In April 2021, USS Mustin sailed within visual range of the Chinese aircraft carrier Liaoning and then let the world know about it.

The operation was a testament to the “boldness” and skill of US sailors, Vice Adm. Roy Kitchener said at the Surface Navy Association national symposium. And those sailors have reveled in the condemnation it drew from China, added Kitchener, who serves as commander of US Navy surface forces and of surface forces in the Pacific.

Mustin was assigned “to mark” the Liaoning as the carrier and its escorts conducted exercises in the South China Sea, Kitchener said, “so they went out there, and they approached the group, and the Chinese [cruiser and destroyer escorts] in the screen came out to meet them.”

Mustin’s crew “realized that at some point all the Chinese escorts sort of backed off, which told us, ‘OK, there’s some operating restrictions that they had around the carrier,'” Kitchener added. “Mustin didn’t have those. They proceeded on in, found a good station, and sat alongside taking pictures and doing other things for quite a bit of time.” One of those photos, showing Mustin’s commanding officer and executive officer casually observing the Liaoning, quickly spread around the world and was widely interpreted as a message to the Chinese navy.

In the weeks that followed, Chinese officials condemned the Mustin, calling its actions “very vile” and accusing the destroyer of endangering Chinese ships and personnel, which US officials denied.

“It was a good story in the end. At the time, we had to manage it a little bit,” Kitchener said Tuesday, adding that Mustin’s crew has commemorated the encounter on a uniform patch.

At the bottom of the patch, alongside Mustin’s initials and hull number, are the words “non grata,” Kitchener said. “I said, ‘Hey, what does that mean?’ And they go, ‘Well, sir, that is from the demarche the Chinese sent to our State Department that said, ‘Hey, the USS Mustin is no longer welcome in the South China Sea because they’re such a pain in the ass.'”

The incident was illustrative of “what our sailors are trained to do,” and the response of Mustin’s crew showed they were unified around their mission, Kitchener said.

Operating close to other forces is not a new experience for the US Navy, but run-ins with Russian and Chinese forces — whose conduct the US has at times deemed “unsafe and unprofessional” — have increased in recent years, amid US tensions with each of those countries.

Kitchener and other Navy officials have said US forces should expect to encounter those forces more often and possibly closer to US shores.

“When we go out now on operations, whether it’s East Coast or West Coast, Black Sea, South China Sea, we’re there head-to-head with our adversaries,” Kitchener said. “They’re there. They’re present. And we’re managing the risk, and our sailors are getting really good at it.”