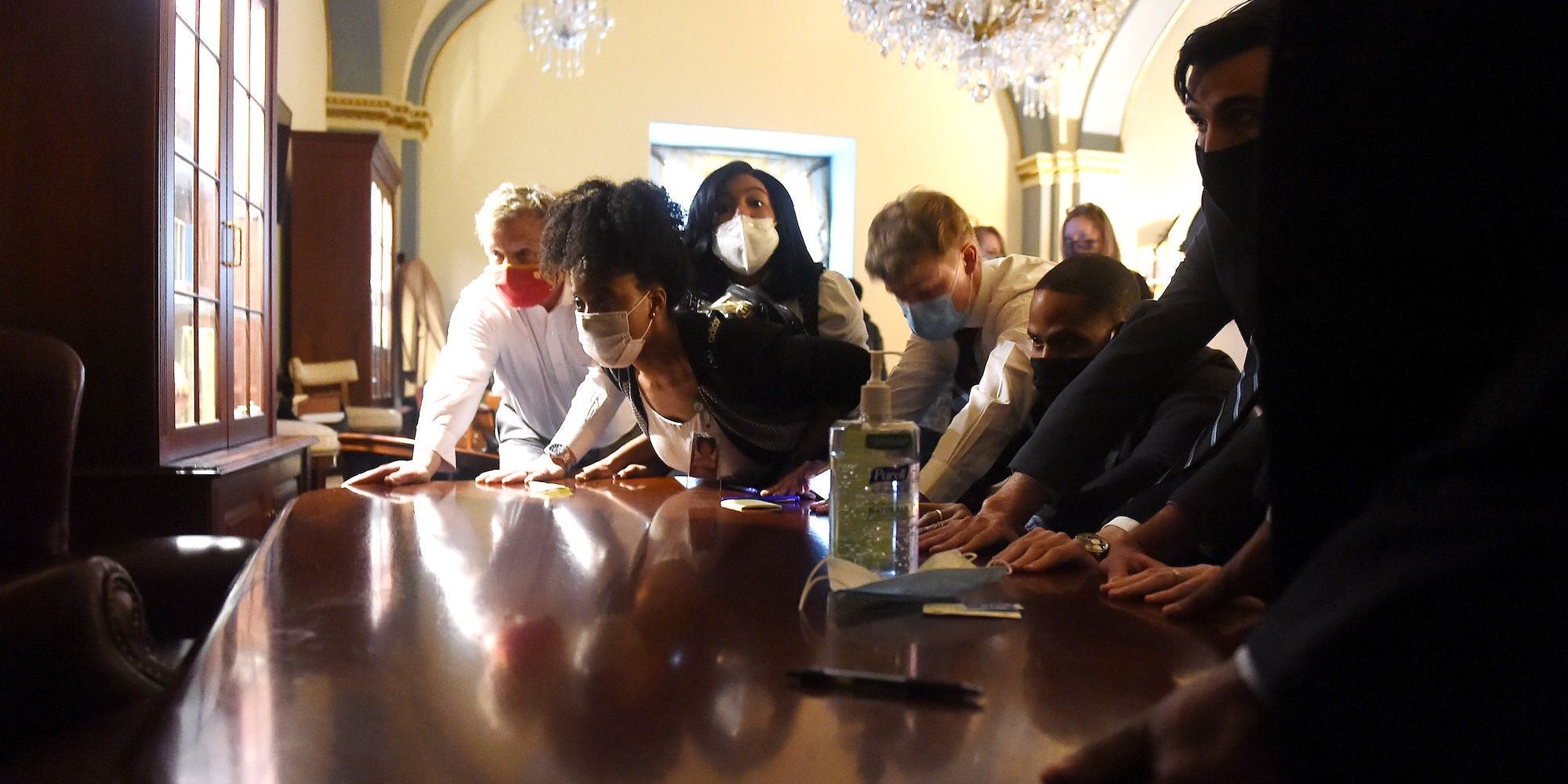 Congress staffers barricade themselves after Trump supporters stormed inside the US Capitol on January 6, 2021.

A year after the January 6 Capitol insurrection, a Hill employee still surveys his workplace for objects he could use to defend himself.

“It’s unfortunate that we now have to take our own personal security into account, and I definitely have plans on what I can use in the office to fight my way out the next time…and there will be a next time,” the senior Democratic legislative staffer told Insider on the one-year anniversary of the insurrection. “I will not let those bastards scare me away from doing job.” But the fear lingers.

“The people who work here know that the next time shit goes down, it’s everyone for themselves,” said another congressional aide, who told Insider they realized that the Capitol Police would primarily protect their bosses in an emergency. Staff, they said, “were hung out to dry.”

House Periodical Press Gallery deputy director Jay Rupert, who hid for hours in his office as rioters taunted outside that “we’re coming to get you,” believes he hasn’t seen the last of the people who could have harmed him that day.

He worried the lack of accountability for the insurrection meant that “there are going to be people that broke into this building on January 6 that come on a tour.”

Hill staffers can still hear the crash of the mob pounding against the doors of the House of Representatives. They remember watching Trump supporters brandish pipes, fire extinguishers, guns, and other weapons as they sought to stop the certification of the 2020 election. They remember huddling in locked rooms as rioters howled in the corridors and returning to their offices to find windows shattered and doors gashed.

Many staffers have departed the institution, with some telling Insider that the trauma from January 6 contributed to their decision. Those who remain say their resolve to serve their country and uphold Congress’ mission has never been stronger. But they see an institution fundamentally fractured by the events of last year, and their own relationship with their jobs forever changed.

“Any sense of security or safety that we had at our workplace vanished,” said Diala Qasem, a House staffer and president of the Congressional Middle Eastern and North African Staff Association. “One year later, many of us are still dealing with this pain.”

The Congressional Black Associates, which represents Hill staffers, said in a statement that, “being in the aftermath of January 6, especially as a Black staffer, is in no way, shape, or form, easy.”

A person is seen hanging from the Capitol facade.

[Read more: The January 6 insurrection, in all its heart-pounding detail, from 34 people who lived through it]

But perhaps the deepest wound staff must contend with is the unprecedented schism that’s occurred between Democrats and Republicans. “The hardest part for me is that I now have to wonder which people I once thought of as my friends would be OK with getting me killed,” the senior Democratic legislative staffer said.

Partisan tensions have run high all year, as Democratic members and staff, along with the rare Republican ally like Rep. Liz Cheney of Wyoming and Rep. Adam Kinzinger of Illinois, continue to push for accountability for January 6. Meanwhile, Republican lawmakers, keenly aware of the sway that former President Donald Trump still holds over their voters and the political potency of false claims that the election was stolen from him, have continued to downplay, deny, or distort what happened on January 6.

On the day of the first-year anniversary, Republican Reps. Matt Gaetz of Florida and Marjorie Taylor Greene of Georgia sat for an interview with former Trump advisor Steve Bannon, where Gaetz declared, “We’re ashamed of nothing.”

“We’re proud of the work we did on January 6th to make legitimate arguments about election integrity,” Gaetz said. “…And we’re actually going to walk the grounds that patriotic Americans walked from the White House to the Capitol who had no intent of breaking the law or doing violence.”

In reality, more than 700 people have faced federal charges for their participation in the riot at the Capitol, where thousands of Trump supporters stormed the grounds and broke into the building, wounding 140 Capitol Police officers and leaving a trail of physical damage across the House and Senate. Four people in the crowd died, and five officers died in the aftermath in connection with January 6.

“I always thought it would be country first,” said Bob Fischer, the manager of the House Democratic cloakroom. But after watching half of the body spend a year trying to deny the severity of January 6, “You begin to wonder what’s more important to some people, their patriotism to our country, or the gain they can make in the near term?”

Fischer, who has a front-row seat to the drama on the House floor for three decades, has witnessed his fair share of partisan disagreements. He also lived through the terror of September 11, 2001 the only event that Hill veterans can point to that even comes close to matching the terror of January 6.

But on September 11, at least lawmakers could agree on what happened. Today, Fischer said, “There are folks now on both sides who can’t work together, who choose not to work together because there’s a mistrust that can’t be overcome. I think the ramifications of what occurred that day are long-term.”

The disgust with the events of January 6 wasn’t limited to Democratic staffers. Lauren Blair Bianchi, a former communications director for Sen. Ted Cruz of Texas, resigned shortly after January 6 when her boss decided to continue objecting to the election results even after the attack. “My whole career I was so focused on playing and winning the game,” she told the Wall Street Journal. “Jan. 6 taught me none of this is a game.”

Ecclesiaste Guerrier, a former Senate staffer, lamented that “last year was an opportunity for us to deeply reflect upon who we are, and who we want to be. Sadly, I believe we’re still searching for the answers to those questions.”