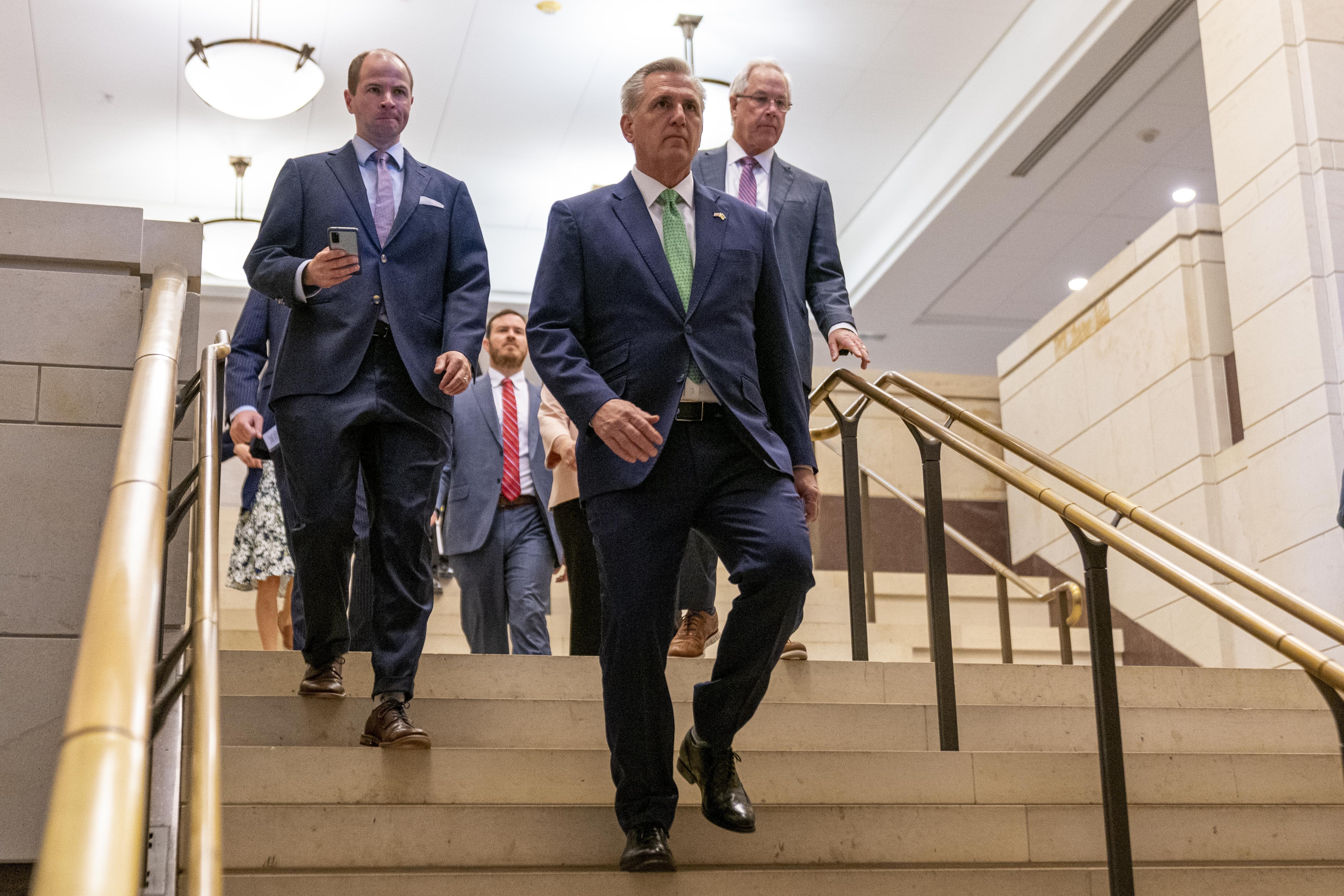 Before Ukrainian President Volodymyr Zelenskyy even started his address to Congress, Republicans had settled on their response: President Joe Biden is too weak on Russia.

In the run-up to the speech, GOP leaders criticized Biden for being slow to punish Vladimir Putin and displayed a growing hawkishness after years of drifting toward the non-interventionist mold embodied by former President Donald Trump. They portrayed Biden as a step behind on all things Ukraine, ignoring the president’s emphasis on balancing global coalitions and moving together with allies.

Republicans’ criticism only grew louder after Zelenskyy called for a no-fly zone and more assistance to beat back Russia in remarks to lawmakers, specifically urging an aircraft transfer that would give Ukraine more firepower. Amid another day of attacks on Ukraine, House Minority Whip Steve Scalise dubbed the ongoing war a “genocide” — a word that implies the United States needs to engage in far greater intervention.

“Our own president needs to step up his game. We’re not doing nearly enough quickly enough to help the Ukrainians,” said Senate Minority Leader Mitch McConnell, adding: “Comparing Zelenskyy to Biden is depressing.”

As the minority party in Congress, there’s little risk to Republicans’ political approach — aside from showing disunity in Washington to the world. Leaders like McConnell have tried to prod Biden while not totally undermining him, despite some rank-and-file Republicans using harsher language to question the president’s decision-making.

And it’s not exactly a message without baggage: Among all congressional Republicans, only Sen. Mitt Romney (R-Utah) supported Trump’s impeachment over the former president’s withholding of assistance to Ukraine. And many congressional Republicans opposed last week’s big spending bill that contained Ukraine aid. Sen. Lindsey Graham (R-S.C.) advised his party to stop sending “mixed messages” and lamented that the spending bill with $14 billion for Ukraine didn’t pass the Senate 100-0.

It’s not just GOP leaders who want a more reactive president. Sen. Susan Collins (R-Maine), perhaps Biden’s best GOP ally in Congress, said that while the president hasn’t been slow in his counters to every aspect of the European war, she believes he could move more quickly across the board.

“It seems like on sanctions, on the import of Russian oil into this country, that he’s had to be pulled by Congress. And the transfer of the Polish [planes] is another example,” she said.

Zelenskyy called out Biden directly, telling him that “being the leader of the world means to be the leader of peace.” Republicans used that line to their advantage on Wednesday as they nudged Biden, even before he announced later Wednesday that the U.S. would send $800 million in aid to Ukraine.

That aid includes new long-range anti-aircraft weapons; it still might not be enough for Republicans, both the open Biden critics and those who are trying to carefully calibrate their comments on Ukraine.

“I do believe that politics stops at the border. So I try to be careful not to be overly critical,” said Sen. Mike Rounds (R-S.D.). But he added that the White House is “having a little bit of a challenge in terms of logistics and organizing … and they need to be held accountable for that.”

In the House, such courteous rhetoric is more rare. Alabama Rep. Mike Rogers, the top Republican on the House Armed Services Committee, said of Zelenskyy’s speech: “I just hope it moves that senile devil we got in the White House.” First-term Rep. Ronny Jackson (R-Texas), who previously served as Trump’s physician, tweeted that Biden “needs a COGNITIVE EXAM now.” Senate Republicans have defended Biden’s mental fitness. Democrats, meanwhile, said Republicans should sheathe their rhetorical knives at a serious moment. Sen. Chris Coons (D-Del.), a close Biden ally, lamented that “many of the folks who are the first to run to the cameras with forceful proposals for what the president has to do today, are the last to come to classified briefings and ask insightful questions.”

Further, Democrats accused Republicans of flipping a switch, engaging in bipartisan unity behind the scenes before turning on Biden in public.

“When we talk among ourselves, there’s coming together. When they go to the media, there’s attacks on Biden,” said Sen. Sherrod Brown (D-Ohio). “I just wish they weren’t partisan during this.”

While Republicans seem united in questioning Biden’s leadership, they’re split in how far they want to take their hawkishness. Some, like Rogers, say they support giving Ukraine everything they need to fight off Russia, including a no-fly zone. Others, like House Minority Leader Kevin McCarthy and fellow GOP leaders, said they supported an aircraft exchange program with allies that gives additional fighter jets to Ukraine.

“There is a bipartisan movement right here … Provide them the planes. Provide them the armament to fight a war that they did not create,” McCarthy said after the address, noting that the planes, Soviet-era MiG jets, would give the Ukrainians the resources they need to create a no fly zone.

Sen. Rick Scott (R-Fla.), the Senate GOP’s campaign chief, said that if Biden doesn’t support a plane transfer he needs to support a no-fly zone. The Biden administration has shied away from both the transfer and a no-fly zone thus far, warning of a widening conflict and agitating Russian President Vladimir Putin.

“This is a direct appeal to the president of the United States to do the right thing,” said Sen. John Barrasso (R-Wyo.), the No. 3 GOP leader. “We’ve had bipartisan calls for the planes and the supplies. This Congress has been united on that. The president has not.”

Amid those Republican critiques, Trump’s decision in 2019 to withhold crucial Ukraine aid lingers over the politics of aid to Ukraine. Trump pressed Zelenskyy to launch two politically motivated investigations, now infamous requests that resulted in the first of two impeachments of the former president.

“That told Putin that the former president and his party didn’t give a darn about Ukraine or its democracy or its people, and that Russia could do what it wanted,” said Rep. Adam Schiff (D-Calif.), who led the prosecution against Trump during the Senate’s impeachment trial.

Zelenskyy’s address comes a week after House members passed a government spending package in two separate votes: one for security programs and another for the package’s non-defense spending, which included Ukraine aid. Nearly 70 House Republicans opposed the first vote, as did a group of progressives, while a majority of Republicans opposed the second.

The bills were tied together in the Senate, where most Republicans opposed the package. Senate Republicans on Wednesday said they would have voted differently on a standalone Ukraine bill.

More than 100 Republicans voted for both bills in the House, underscoring a level of unity amid the Kremlin invasion. So even as they backside drive on Biden’s foreign policy decision-making, Republicans are also trying to cast themselves as collaborators. As Rep. Mike Waltz (R-Fla.), who formerly served as a Green Beret, put it: “I’ve never seen this building so unified. So get on the ship. Let’s go.”

“This is not a time for partisan rhetoric,” said Rep. Michael McCaul, the top Republican on the House Foreign Affairs Committee, after Zelenskyy’s address. “This is a time to unify as a nation to unify behind Ukraine against one of the most evil forces we’ve seen since my father’s war, and that’s World War II.”

Marianne LeVine and Kyle Cheney contributed to this report.