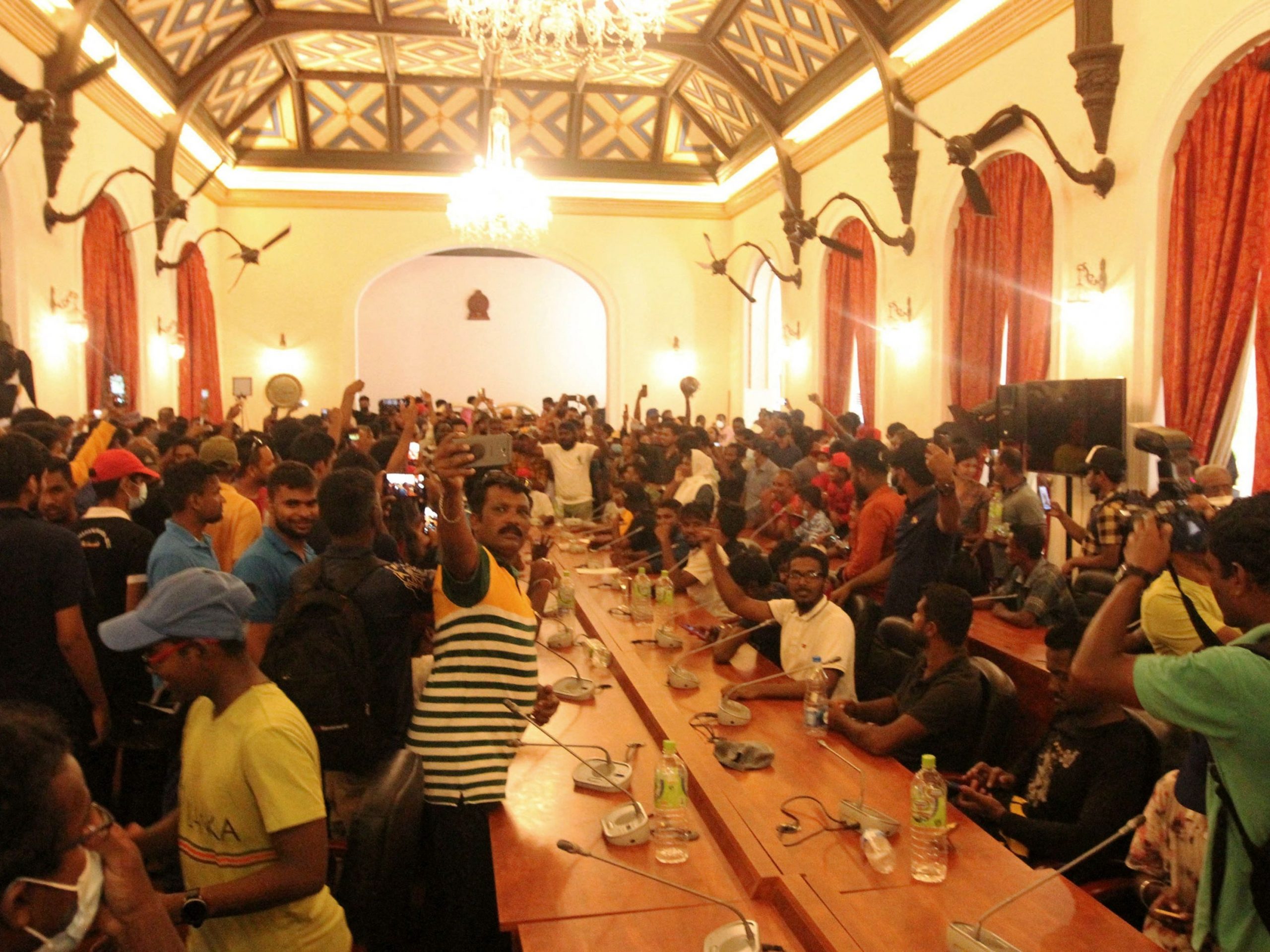 Protesters crowd inside the dining hall of the official residence of Sri Lanka’s President, in Colombo, on July 10.

The protesters who have occupied the Sri Lankan presidential and prime ministerial residences say they will remain there until the leaders officially quit, according to reports.

Since then, photos have emerged of how the protesters are making themselves at home in the luxurious official residences. The leaders of the protest movement said on Sunday, per reports, that they will stay put until the leaders finally leave office.

“The president has to resign, the prime minister has to resign, and the government has to go,” said playwright Ruwanthie de Chickera during a Sunday news conference in Colombo, per Reuters.

Rajapaksa said he would step down on July 13, per an announcement made by the parliament’s speaker on Saturday. But he has not been seen or made a public statement himself about the resignation, BBC News.

There has been pressure on him to quit following months of protests about soaring inflation causing food, medicine, and fuel shortages, as well as blackouts.

Wickremesinghe also said on Saturday he would step down after protesters set fire to his private home. A man tries gym equipment inside the President’s house gym, on the following day after demonstrators entered the building, after President Gotabaya Rajapaksa fled, amid the country’s economic crisis, in Colombo, Sri Lanka July 10, 2022. REUTERS/Dinuka Liyanawatte

But the protest leaders say they are not convinced the leaders will actually go, per reports.

“Our struggle is not over,” student protest leader Lahiru Weerasekara said, according to AFP. “We won’t give up this struggle until he [President Rajapaksa] actually leaves,” he said.

Since then, protesters have tried out the four-poster beds, used the treadmill, and swam in the property’s pool, according to reports. People crowd inside the official residence of Sri Lanka’s President, in Colombo, on July 10, 2022,

“I’ve never seen a place like this in my life,” said 61-year-old handkerchief seller B.M. Chandrawathi, per Reuters. She brought her daughter and grandchildren to the palace after protesters stormed it, according to the news agency.

“They enjoyed super luxury while we suffered,” Chandrawathi continued. “We were hoodwinked. I wanted my kids and grandkids to see the luxurious lifestyles they were enjoying.” People cook in the garden of the Prime Minister’s residence on the following day after demonstrators entered the building, amid the country’s economic crisis, in Colombo, Sri Lanka July 10, 2022. REUTERS/Dinuka Liyanawatte

US Secretary of State Antony Blinken on Sunday urged Sri Lankan leaders to “work quickly to try to identify and implement solutions that will bring back the prospect of long-term economic stability, address the Sri Lankan people’s discontent, which is so powerful and palpable.”