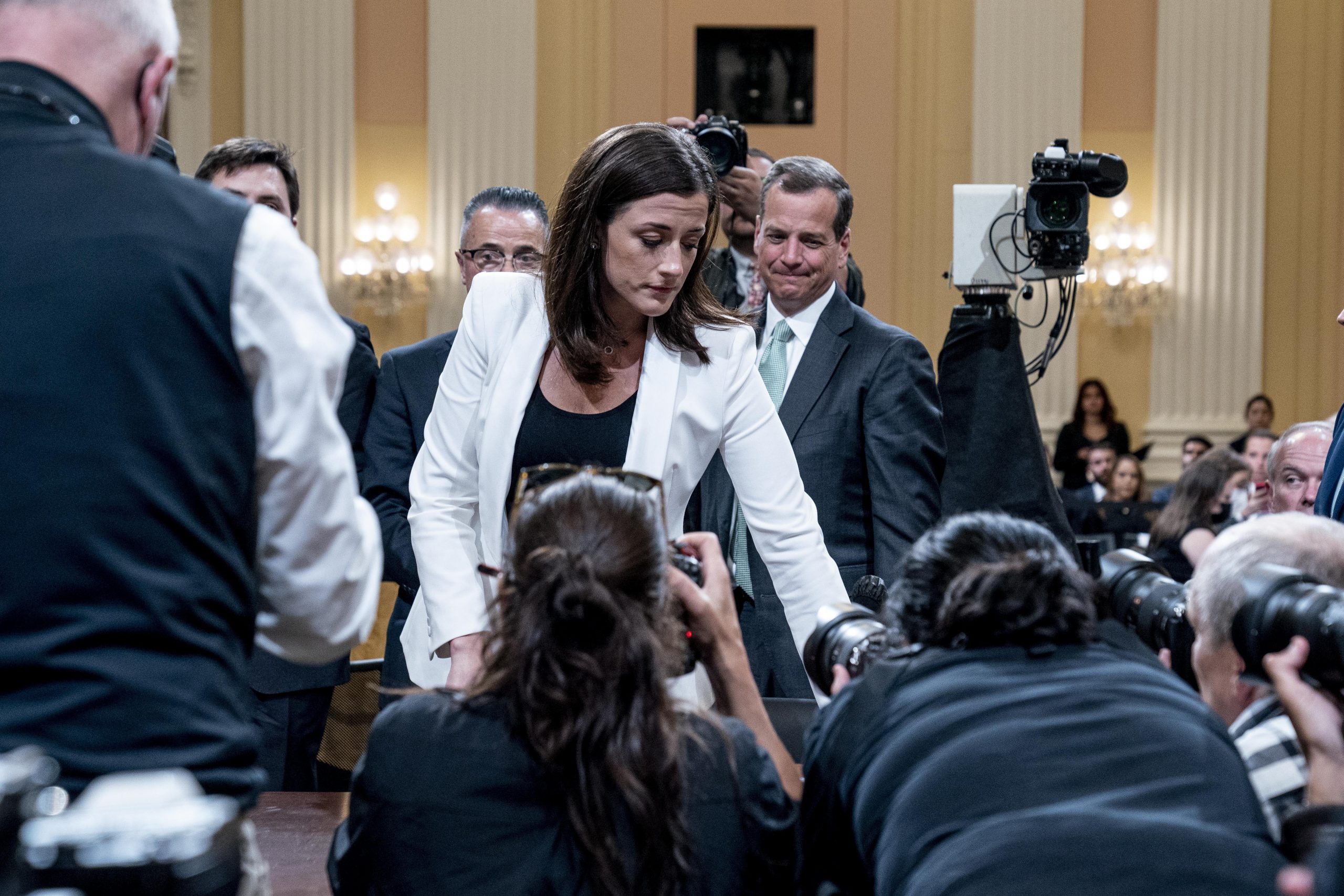 Donald Trump has smashed and smeared so much porcelain and ketchup against the wall since entering politics that sometimes nothing new we learn about him can surprise us. On Tuesday, former White House aide Cassidy Hutchinson ladled out a new round of Trump craziness before the Jan. 6 committee. Because Trump was the subject, the sting may have lasted only a few milliseconds before its fire receded and some of us began to sequester the Hutchinson testimony in that seething cesspit where we stow evidence of his barbarous and criminal ways.

But these weren’t garden variety Trump outrages Hutchinson shared before the committee, and we shouldn’t let them go so easily. They were additional evidence of a despot attempting to reverse a fair election. Don’t deposit what she said in the cesspit right away. Leave it out so you can absorb the stink and never forget it.

From Hutchinson we learned that Trump wanted the metal detectors removed for his Jan. 6 rally on the Ellipse because he was worried that photos of a sparsely attended event would mar his image. Said Hutchinson, “I was in the vicinity of a conversation where I overheard the president say something to the effect of, ‘I don’t effing care that they have weapons.’” Trump added, “They’re not here to hurt me,” a statement Hutchinson says Trump repeated. Trump’s knowledge that 1) the crowd was well armed and that 2) his certainty that he was safe suggests he had a good idea of who were the weapons’ targets.

From Hutchinson we learned of Trump’s plan to join the Capitol commotion and the toddler’s fit he threw in The Beast, the presidential limo, when told he couldn’t go. “I’m the effing president, take me up to the Capitol now,” Trump reportedly said. Robert Engel, head of Trump’s security detail, insisted they return to the White House. According to Hutchinson, who was told the story by deputy chief of staff Tony Ornato in Engel’s presence, “The president reached up toward the front of the vehicle to grab at the steering wheel. Mr. Engel grabbed his arm and said, ‘Sir, you need to take your hand off the steering wheel.’” Trump lunged for Engel’s clavicle with his free hand. This Trump tale gives him additional centrality to the Jan. 6 riots: If there was any doubt before, we now know he wanted to personally join the mêlée at the Capitol and overturn the election.

From Hutchinson we learned anew that Trump seconded the view, expressed by some chanting rioters, that Vice President Mike Pence deserved to be hanged. That former Trump lawyer Rudy Giuliani and chief of staff Mark Meadows sought Jan. 6 pardons. That Trump wanted to pardon the rioters in the video speech he eventually gave that day, telling them to go home. It’s not criminal to want a pardon, but wanting one before you’re convicted of anything implies a guilty mind.

And we learned of another toddler’s fit that Trump threw on Dec. 1, 2020, at the White House — flinging a dish at the dining room wall and staining it with ketchup after receiving a report that Attorney General Bill Barr had determined there had been no election fraud. “There were several times throughout my tenure with the chief of staff that I was aware of [Trump] either throwing dishes or flipping the table cloth to let all the contents of the table go on to the floor and likely break or go everywhere,” Hutchinson testified. Is there a better metaphor anywhere for the Trump administration?

Thanks to Trump’s superpower of shamelessness — and top Republicans incorrectly dismissing Hutchinson’s words as hearsay — these new revelations won’t stick unless we break the spell he has held over the nation for so long.

Hutchinson’s testimony won’t be potent enough on its own to undo the Trump hex — it was just an afternoon interview on afternoon television, and Trump has weathered worse. But coming as it does from a White House insider and loyalist who worked only a 10-second walk from the Oval Office and who appears to be a credible witness, the session damaged the Trump edifice in a way that a thousand op-eds and a hundred political speeches couldn’t. Without any apparent animus or any theatrics, Hutchinson artfully sketched the portrait many of us hold in our mind’s eye of the former president: A belligerent oaf who cares for nothing but himself; a porcupinal blowhard who will do anything to maintain power; and a mess-making child who breaks things when he doesn’t get his way and leaves us to clean up after him.

What are the chances that Cassidy Hutchinson has a brother named Kerouac? Send beat poetry and pep pills to [email protected]. No new email alert subscriptions are being honored at this time. My Twitter feed enjoys a good food fight from time to time. My RSS feed believes Trump should have driven The Beast to the Capitol himself.