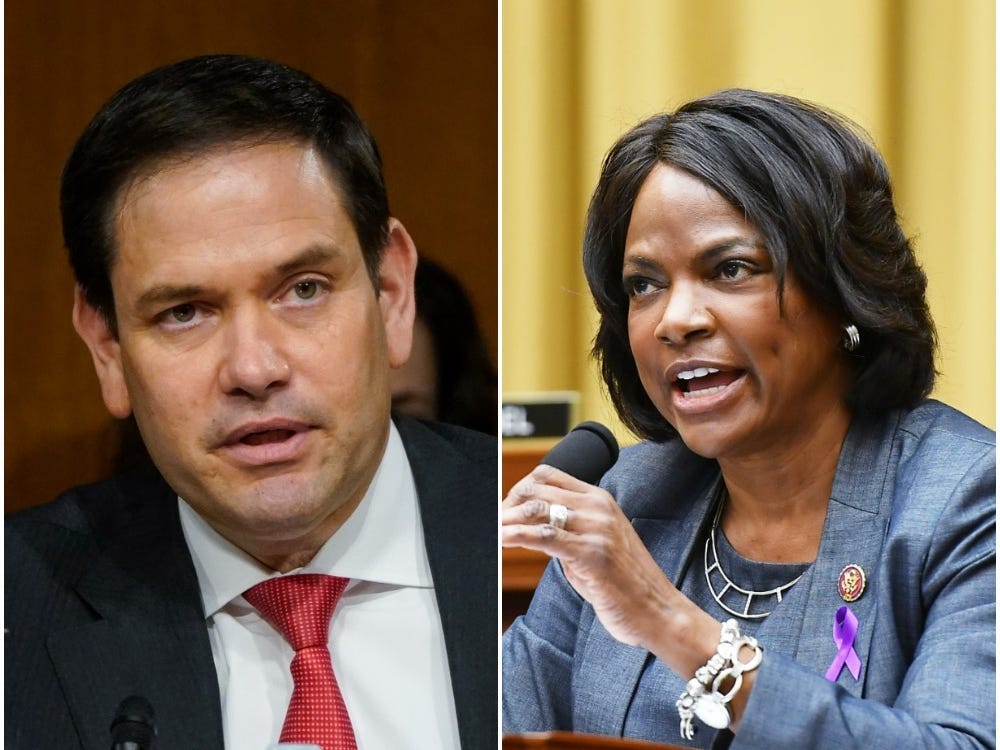 Sen. Marco Rubio, a Republican of Florida, is up for re-election this year and is expected to face Rep. Val Demings, a Democrat of Florida who was on President Joe Biden’s short list for running mate when he was campaigning for the White House.

Incumbent Republican Sen. Marco Rubio is telegraphing what he considers one of his biggest political assets in Florida against Rep. Val Demings, his likely Democratic challenger in what could become one of the most expensive US Senate races in history.

Rubio’s latest attack strategy as he seeks reelection in the battleground state is to tout his work co-authoring the $800 billion Paycheck Protection Program, a coronavirus rescue measure that allowed small businesses to borrow forgivable loans from the federal government to keep workers on the payroll.

In a digital ad out Monday, the Rubio campaign contrasts the senator’s work on the PPP in March 2020, during the early days of the pandemic, with media interviews Demings took around the same time. In them, she was asked about the possibility of then-Democratic presidential candidate Joe Biden picking her as his running mate.

“While Val focused on politics, Marco got to work,” says the ad, dubbed “The Choice is Clear” and provided exclusively to Insider.

It concludes with a Demings voice-over saying, “I would be honored to serve alongside Joe Biden.”

In 2020 Demings was widely considered to be on Biden’s vice-presidential candidate shortlist, a role that eventually went to then-Sen. Kamala Harris, a Democrat of California.

Demings voted for all COVID rescue bills that included the PPP, but Rubio voted against Biden’s $1.9 trillion coronavirus aid package in 2021 even though it added more funds to the small business loan program. All congressional Republicans voted against the $1.9 trillion stimulus, warning that it would lead to inflation and mostly bail out blue states.

Today, most states are awash in cash and inflation has reached a 40-year high, a trend economists attribute to numerous factors. Still, the unemployment rate has continued to fall and wages are rising.

“The truth is Marco Rubio sided with his party bosses over everyday Floridians and fought against critical support for Florida’s working families during COVID-19,” Slater said.

The initial ad buy is a modest four figures, but the campaign expects to spend more on advertising the issue as the race heats up. In December 2021, the Rubio campaign spent roughly $623,000 on digital fundraising and consulting through the GOP megafirm Targeted Victory, according to Federal Election Commission filings.

Rubio led the PPP provision as chair of the Small Business Committee. In Florida, the program saved 3.3 million jobs through the end of 2020, according to the Miami Herald. When adding in funding that went out in 2021, it supported 6.1 million jobs in all, according to a fact sheet from Rubio’s office.

SBA ran the program, and it had some problems with fraud currently being investigated by federal oversight agencies. It also had a rocky initial rollout as SBA built the infrastructure.

The Rubio ad comes as Biden’s popularity has shrunk. Florida’s Senate race is among a handful of hotly contested races that could determine which party controls the Senate — and, along with it, Biden’s agenda. Rep. Val Demings of Florida speaks before the introduction of then Vice Presidential nominee Sen. Kamala Harris during an early voting mobilization event in Orlando, Florida on October 19, 2020.

Florida race expected to be tight

Demings was an impeachment manager in former President Donald Trump’s first Senate trial and has been in the House since 2017, representing a district that includes Orlando. Previously, Demings was in law enforcement for 27 years, including as Orlando’s first female police chief.

Biden promised in the 2020 Democratic primaries that he would pick a woman as his running mate. Demings appeared open to the possibility in media interviews, saying on WKMG News 6 that she wasn’t seeking out any position but “if asked, I would consider it an honor to be asked and to serve my country in such a special way.”

The Democratic primary in Florida is August 23, and Demings has quickly become the favorite for the nomination, as evidenced by her fundraising prowess. In the first three months of 2022, she raised $10 million largely through online donations.

Rubio’s first-quarter fundraising figures aren’t out yet, but during the last three months of 2021 Demings raised $7.2 million, compared to Rubio’s $5.2 million. February polling from the University of North Florida shows Rubio’s favored to win reelection.

One of the Demings campaign’s biggest attacks against Rubio also has taken shape in recent weeks. Her team has attacked Rubio for skipping some committee meetings, including a couple of times when he appeared on TV while hearings were happening. Rubio has said his schedule, including as co-chair of the powerful Intelligence Committee, doesn’t allow him to attend every hearing.

Skipping hearings isn’t necessarily unusual given that several can be happening concurrently, but it’s a line of attack Rubio has faced before after missing votes, including during his 2016 presidential run.

Demings didn’t attend a March 5 House Homeland Security Committee hearing on the coronavirus response, but Daniel Gleick, her congressional office spokesman, said she was with the House Permanent Select Committee on Intelligence at that time.

“Rep. Demings works hard to attend all of her committee responsibilities,” he said. “Sometimes she has conflicting official business.”