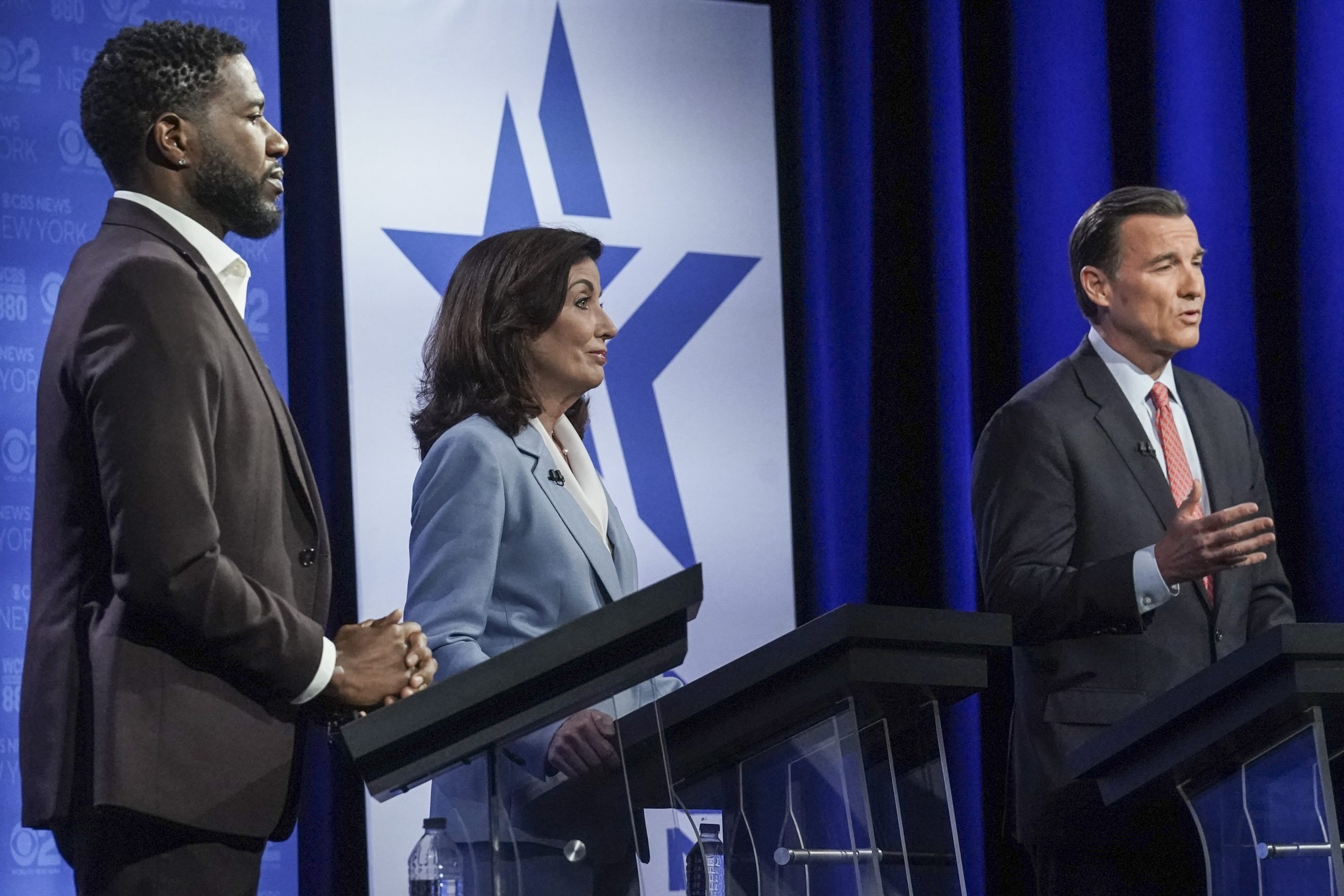 ALBANY, N.Y. — The first debate between New York Gov. Kathy Hochul and her Democratic primary challengers offered two opportunities: First, a chance for Hochul to go on offense, a mode she has publicly resisted after taking over from her famously combative predecessor.

Second, it was also a platform for Long Island Rep. Tom Suozzi and New York City Public Advocate Jumaane Williams to seize a breakout moment — something to shift the dynamic of the race in which Hochul holds significant polling and fund-raising advantages.

At the end of the hour-long debate Tuesday night hosted and broadcast by WCBS-TV, neither of those things happened.

Williams made passionate arguments from Hochul’s left that New York should have a governor that would take dramatic action to prioritize combating gun violence as an all-encompassing priority. Suozzi slammed Hochul from a more moderate position at nearly every chance to point out inconsistencies he sees in her commitments to ethics and public safety.

And Hochul held a cool defense in rebutting hostilities that Suozzi and Williams have been lobbing for months, at one point saying “I’d be delighted to” respond to a barb from Suozzi about her first lieutenant governor pick, Brian Benjamin, who resigned in April after he was arrested and charged in a federal bribery case.

She attacked just once: when Suozzi suggested there was “no daylight” among the trio on protecting women’s access to abortion. Hochul pointed to Suozzi’s initial support years ago for the Hyde amendment, which banned federal funds — including Medicaid services — from covering abortion care.

“There’s so much bright daylight between our positions that I need to find a pair of sunglasses,” she said. “I will tell you that I don’t think that the right to have an abortion should be reserved only for wealthy women.”

“I don’t know what the governor is talking about,” Suozzi said, pointing to his A rating from Planned Parenthood. There was little cross talk or active arguing, but Williams and Suozzi stayed sharp in their critiques of Hochul’s nine short months in office, particularly of the deal that she struck with little notice or legislative communication to shell out a record public subsidy of $850 million combined county and state dollars for a new Buffalo Bills stadium in her hometown. Polling in April showed voters disapproved 63 percent to 24 percent of that particular spending plan.

“She pledged to make it the most ethical, the most transparent government in the history of New York State,” Williams said. “And that simply hasn’t happened.”

Their boldest moments were at the top of the hour discussing how the state would address spikes in violent crime — which was setting up to be the season’s top election issue even before mass shootings in Buffalo, Uvalde, Texas, and Tulsa — and now been smashed into a confusing discussion that includes gun violence, mental health and the state’s bail laws.

Most recently, a Spectrum News NY1/Siena College poll conducted in the final week of May found 70 percent of New York City residents felt less safe now than they did before the onset of the pandemic, and 76 percent were either somewhat or very concerned that they’ll be the victim of a violent crime.

But Williams said that was too little, too late, as he pointed to his years advocating for holistic, community-driven approaches after listing names of classmates he attended high school with in the 1990s who have died from gun violence. On the other side, Suozzi said that Hochul hasn’t taken a bold enough stance in cracking down on individuals who have proven criminal records and inaccurately asserted that Hochul did not push for tweaks to the state’s bail laws — which Republicans and moderate Democrats said needed tightening for public safety purposes — in the just-finished legislative session.

“She says she cares about crime, but does nothing to fix bail reform,” he said.

Hochul and the state Legislature did alter the laws to give judges more discretion on when to set bail for certain individuals, but stopped short of implementing a “dangerousness” standard, which progressive lawmakers (and Williams) say is unfairly applied in biased ways to minority communities, but which Suozzi supported.

Hochul responded, “No governor has done more — in less time — than I have to address gun violence.”

The three candidates have committed to another debate June 16.