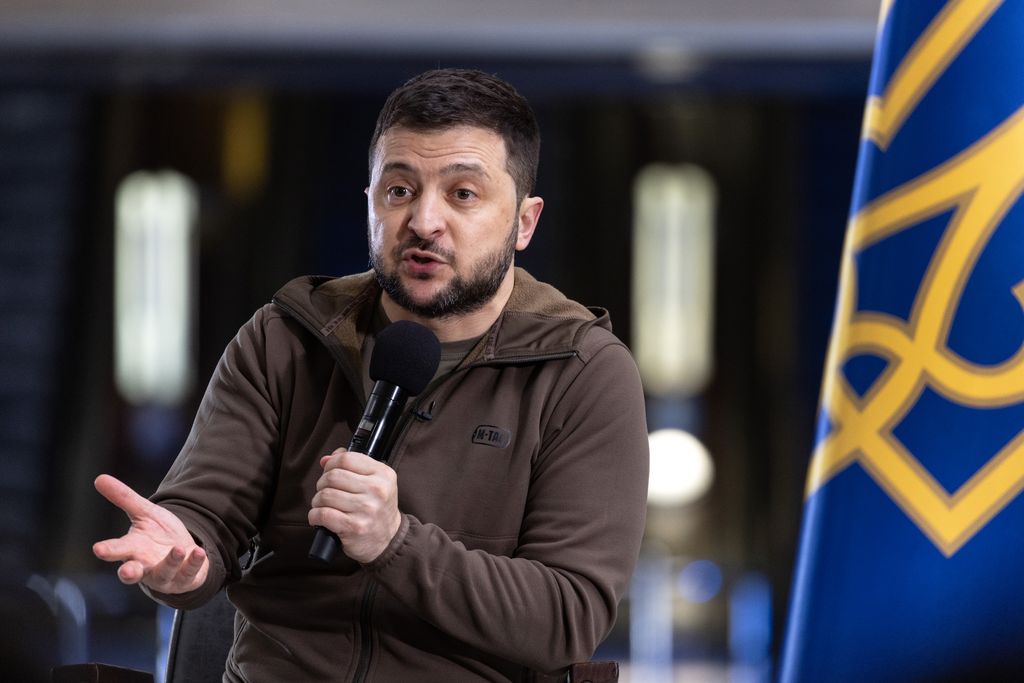 BERLIN — In the latest installment of the Eurovision Song Contest, Europeans seized the opportunity to show solidarity with Ukraine and thumb their noses at Vladimir Putin.

But away from the enthusiasm for Ukraine’s winning entry at that festival of campy pageantry, shallow symbolism and bad English, the Continent’s most powerful capitals have begun singing from a different song sheet.

After weeks spent fretting over what would happen if Russia crushed Ukraine, Western European leaders are now worried about what might happen if Ukraine actually wins. Ukraine’s recent success in pushing Russian troops out of some occupied territory has prompted leaders from France to Germany to Italy to conclude that a once-unthinkable Ukrainian victory is now a distinct possibility.

Even as European leaders sympathize publicly with Ukraine’s struggle and in some cases have gone to great lengths to support the country, they also fear that what French President Emmanuel Macron last week called a “humiliation” of Russia could create a whole new set of problems, Western officials say.

One big concern is that a Ukrainian win could destabilize Russia, making it even more unpredictable and putting a normalization of energy links further out of reach. That’s why some western European capitals quietly favor a “face-saving” resolution to the conflict, even if it costs Ukraine some territory.

Even as Macron and German Chancellor Olaf Scholz have said repeatedly it would be up to Ukraine to determine the conditions for a halt to hostilities, they’ve recently underscored their preference for a ceasefire, sooner rather than later.

“We are not at war with Russia,” Macron said in an address at the European Parliament in Strasbourg last week, stressing that Europe’s “duty is to stand with Ukraine to achieve a ceasefire, then build peace.”

Macron also declared that, after peace was achieved, Europe would have to construct “new balances of security” — the kind of phrase that sets off alarm bells in Central and Eastern European countries, where it is seen as code for rewarding Putin with a say over what happens on their territory.

Scholz struck a similar note during a lengthy telephone conversation with Russian President Vladimir Putin on Friday. After the call, Scholz said via Twitter that he had pushed three points with Putin, the first of which was: “There must be a ceasefire in Ukraine as quickly as possible.”

A demand that Russia immediately retreat and withdraw all its forces from Ukrainian territory was notably not among the three points. In an interview over the weekend with German news outlet T-Online, Scholz, who delayed sending heavy weaponry to Ukraine, said Germany would continue to support sanctions against Russia, while repeating his call for a diplomatic solution.

“We agreed that we must continue to support Ukraine and put pressure on Moscow, but also begin to ask how to build peace,” he told reporters, adding that the effort must also include Ukraine.

“People … want to think about the possibility of bringing a ceasefire and starting again some credible negotiations.  That’s the situation right now.  I think that we have to think deeply on how to address this,” Draghi declared.

Even as they stress their support for Ukraine, the fact that the leaders of the EU’s three largest countries have adopted nearly identical talking points on peace negotiations just as Kyiv has the upper hand in its fight suggests the trio is trying to pressure Ukrainian leaders into negotiations.

So far, Ukrainian President Volodymyr Zelenskyy is having none of it.

“We want the Russian army to leave our land — we aren’t on Russian soil,” Zelenskyy said in an interview with Italy’s RAI public broadcaster on Thursday. “We won’t help Putin save face by paying with our territory. That would be unjust.”

Macron was looking “in vain” for “a way out for Russia,” Zelenskyy added.

Ukrainian officials argue that any concession towards Moscow on territory — including Crimea — would open the door to future Russian incursions into their territory.

The European leaders’ call for talks with Russia stands in contrast to U.S. policy. Secretary of Defense Lloyd Austin said after a visit to Kyiv in late April that Washington believed Ukraine “can win.”

Responding to a question about Draghi’s call for peace negotiations, Karen Donfried, Assistant Secretary of State for Europe, said that while the U.S. believed the conflict would ultimately be resolved through diplomacy, the administration’s priority remained helping Ukraine to defend itself.

“Our focus today is on strengthening Ukraine’s hand as much as possible on the battlefield, so that when the time does come, Ukraine has as much leverage as possible at the negotiating table,” she told reporters on Friday.

For now, Washington isn’t worried that European support for the U.S.-led coalition supporting Ukraine is weakening. A senior U.S. official stressed that such European debates were not new and that there’s still an overall unity of purpose, pointing to the readiness of countries from Slovakia to Germany to provide Ukraine with arms.

“Of course we worry about a fracture, but I think allies also understand what’s at stake here,” the official said. “Look at the EU. They have argued over Russian oil and gas for years, but suddenly they think they can get to a ban? That’s historic.”

Even so, the divisions between Europe’s biggest countries, the EU’s eastern members and the U.S. are notable and not just limited to the political class.

A recent poll across 27 Western countries found that support for continued diplomatic engagement with Russia was significantly stronger in Italy, Germany and France than in the U.S. or Poland. The same trend was apparent on the question of weapons aid for Ukraine, with support weaker in the big western European countries.

“The whole EU, after this initial phase when we helped with military aid, should concentrate on negotiations and applying pressure for a political solution,” he told POLITICO.

While it was important that Europe not “lower its guard” vis a vis Putin, Conte said the EU also shouldn’t lose sight of a basic reality: “Russia is there and will remain there.”