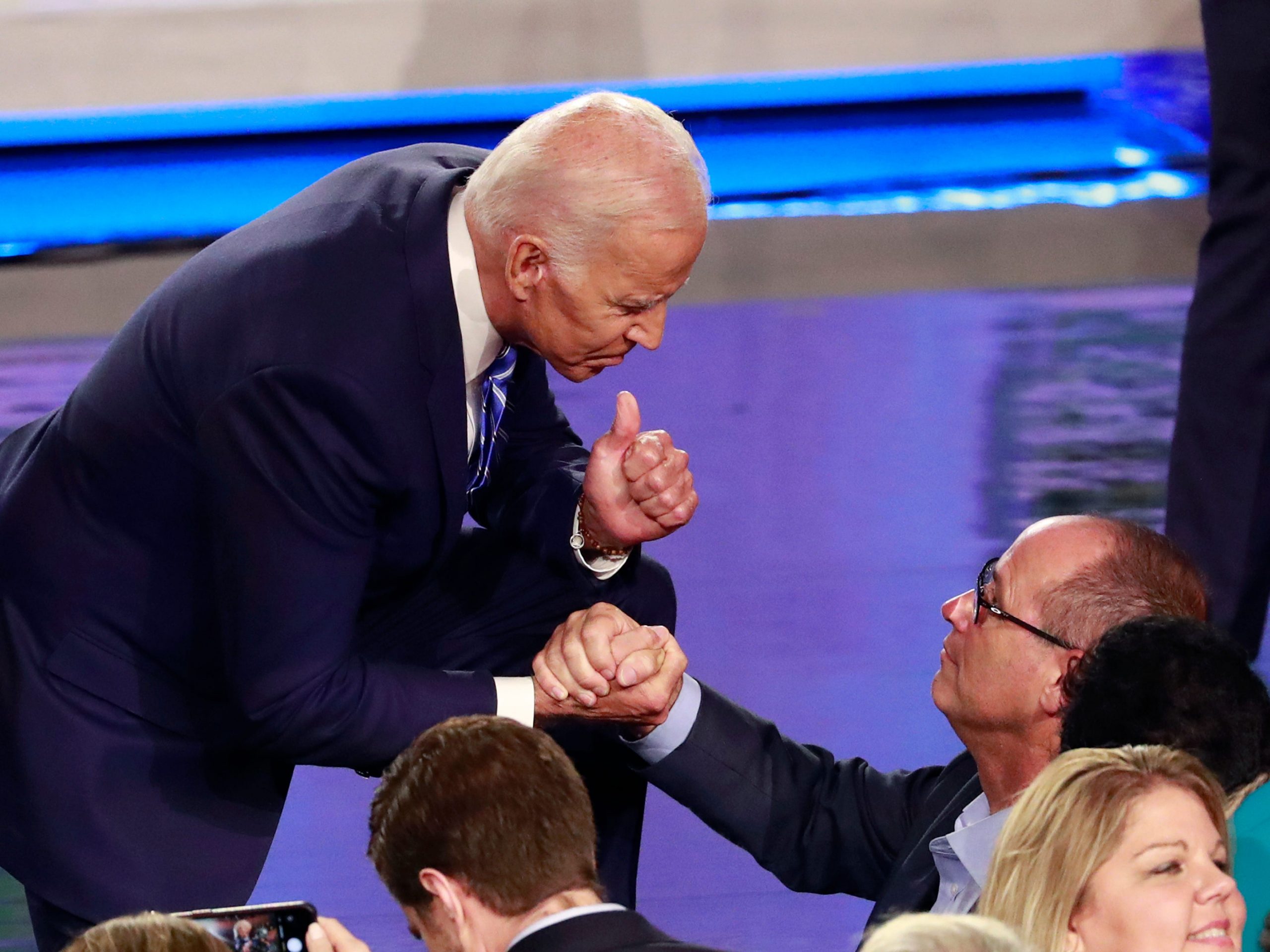 Then-Democratic presidential candidate Joe Biden grabs the hand of Fred Guttenberg, who lost a daughter in the Parkland shooting, following the Democratic primary debate on June 27, 2019, in Miami.

After the 2018 mass school shooting in Parkland, Florida, the father of a teen slain in the attack got advice from Joe Biden. It was the most important message Fred Guttenberg said he received on moving forward from grief.

The former vice president at the time presented Guttenberg with data on the impact of tragic events on relationships, not to evoke fear, but to help him be prepared, recalled Guttenberg, whose daughter Jaime was among the 17 people killed at Marjory Stoneman Douglas High School.

‘”The truth is, no two people grieve in the same way,'” Biden told Guttenberg, urging him to allow his family members to grieve in their own unique way but to also support each other.

“I’ve been very public and out there,” said Guttenberg, author of Find The Helpers. “My wife and son have been very private. If not for Joe Biden, I would have thought something was wrong with us. But I don’t, and we’ve worked really hard to give each other the space but to also be together.”

Biden has forged strong connections with families of gun violence victims — and many others — by counseling them through their grief, something he understands well after losing his own daughter and wife in a 1972 car crash and his son in 2015 to cancer.

Today, Guttenberg said he has a rapport with and a “deep affection” for the president. “He gave me advice about going forward that, to this day, has had more meaning than any other person’s advice,” he said.

Guttenberg also has the phone numbers and email addresses of members of Biden’s administration, and he has been in touch with them about the administration’s response to mass shootings last month in Buffalo, New York, and Uvalde, Texas. He thinks his voice is being heard.

Guttenberg drew national attention in 2020 for disrupting and being escorted from Donald Trump’s State of the Union address when the former president defended the 2nd Amendment. He said then he regretted his actions.

When Biden took office as president in 2021, Guttenberg expected him to do “everything in his authority” to address gun violence. He said Biden has done that through executive actions.

He wants the administration to keep the focus on getting Biden’s second nominee to lead the Bureau of Alcohol Tobacco Firearms and Explosives, former US attorney Steve Dettelbach, confirmed. He’d also like to see Biden appoint a director of gun violence prevention, even if the value is symbolic.

“But I know he’s trying everything that he can, and I believe we may have seen a turning point on this issue and that they are going to fight like Hell to make this matter in the November election,” he said.

Congress is trying again to take action this week on a host of gun safety issues. Guttenberg said he will be in Washington to push for action on “Jaime’s Law,” a bill named for his daughter that would extend background check requirements to include ammunition.

But he thinks there needs to be one more election, with a high voter turnout, for Congress to have the votes to pass major gun safety legislation.

He plans to join other gun-control supporters for a march on June 11, organized by March For Our Lives, the youth-led organization that launched after the Parkland shooting.

Guttenberg said he wants people to make their plans to vote now and hopes they will question why a small group of lawmakers is “holding up America” on addressing gun violence.

“My hope is people really do see that and get so angered that they become part of solving it by turning out to vote,” he said.