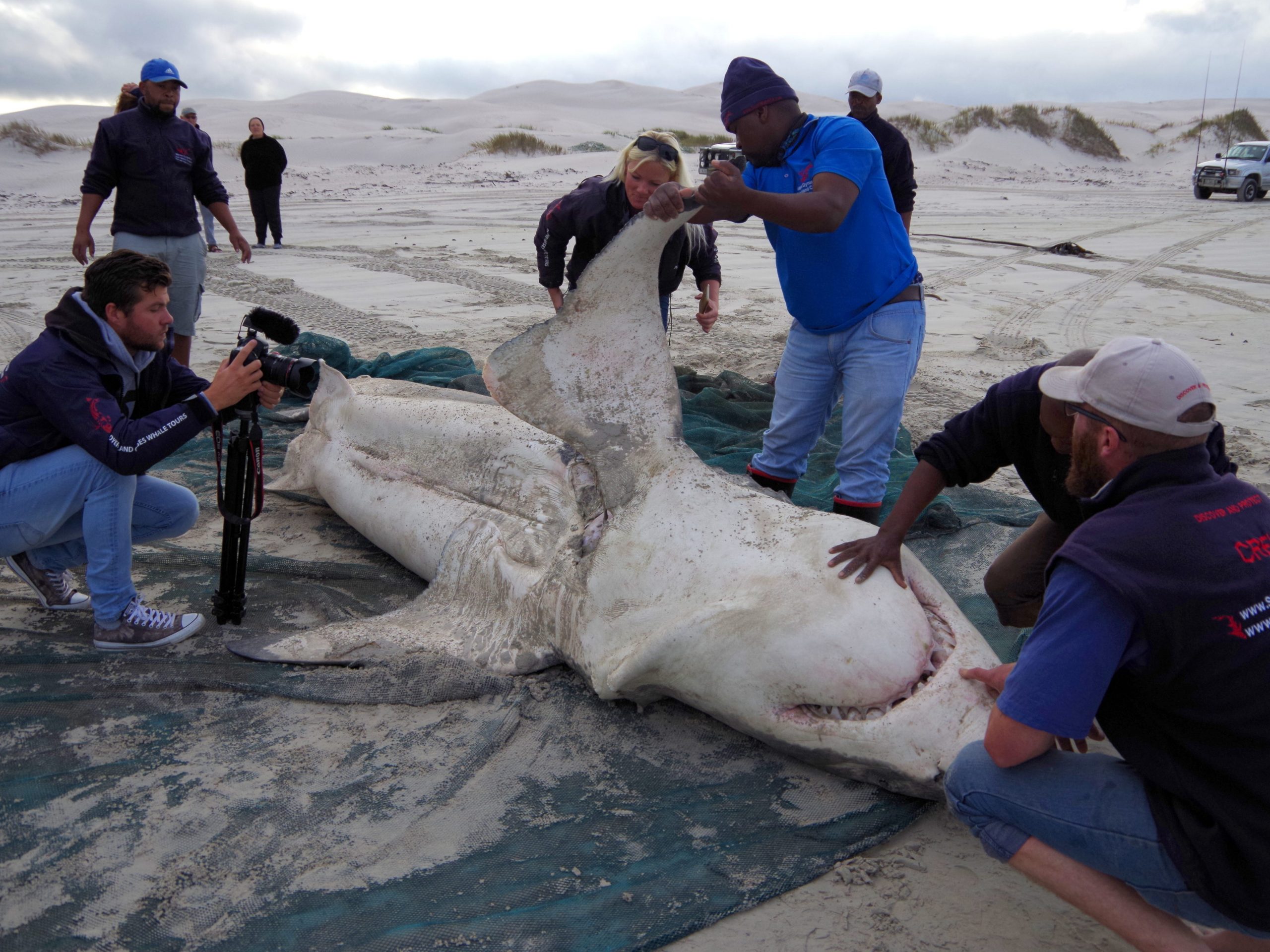 People inspect the carcass of a great white shark.

A pair of orcas has been terrorizing great white sharks off South Africa’s coast since 2017, causing them to flee en masse, according to a new study.

The study, published in the African Journal of Marine Science, suggests the menacing orcas might have scared great white sharks away from their habitat on the Gansbaai coast on South Africa’s Western Cape.

A team of researchers from Marine Dynamics and the Dyer Island Conservation Trust noticed that over five and a half years, 14 sharks had been tracked fleeing the area in which the orcas are present.

Visual sightings of the great white sharks have also decreased, per the study.

Eight great white sharks washed ashore between 2017 and 2020, according to the data. Seven of them had their livers ripped out, with some also having had their hearts removed, the study said. A researcher inspects the carcass of a great white shark.

The wounds are distinctively made by the same pair of killer whales, according to the study. The orcas are likely to have killed more sharks that are yet to wash up ashore, the study said.

The attacks have triggered the sharks’ “flight” instinct, causing a mass migration away from the marine predators, according to the study.

Alison Towner, a senior white shark biologist at the Dyer Island Conservation Trust, said: “What we seem to be witnessing though is a large-scale avoidance strategy, mirroring what we see used by wild dogs in the Serengeti in Tanzania, in response to increased lion presence.” A team of researchers take the measurements of a great white shark that washed ashore.

Towner continued: “The research is particularly important, as by determining how large marine predators respond to risk, we can understand the dynamics of coexistence with other predator communities.”

Towner observed that the decrease in the number of great white sharks has other effects on the sea’s fragile ecosystem. It has triggered an emergence in the area of the bronze whaler shark, which the great white shark typically eats, Towner said. These sharks, however, are also being targeted by orcas, per the study. An orca feasting on a blue whale that it just killed in the first documented killing of its kind.

Marine scientists from Cetrec WA (Cetacean Research) were able to detail how orcas swam inside the mouth of blue whales to eat their tongues. Researchers saw large chunks of skin and blubber having been gouged from the body of a blue whale and most of the dorsal fin having been bitten off, Insider’s Bethany Dawson reported.