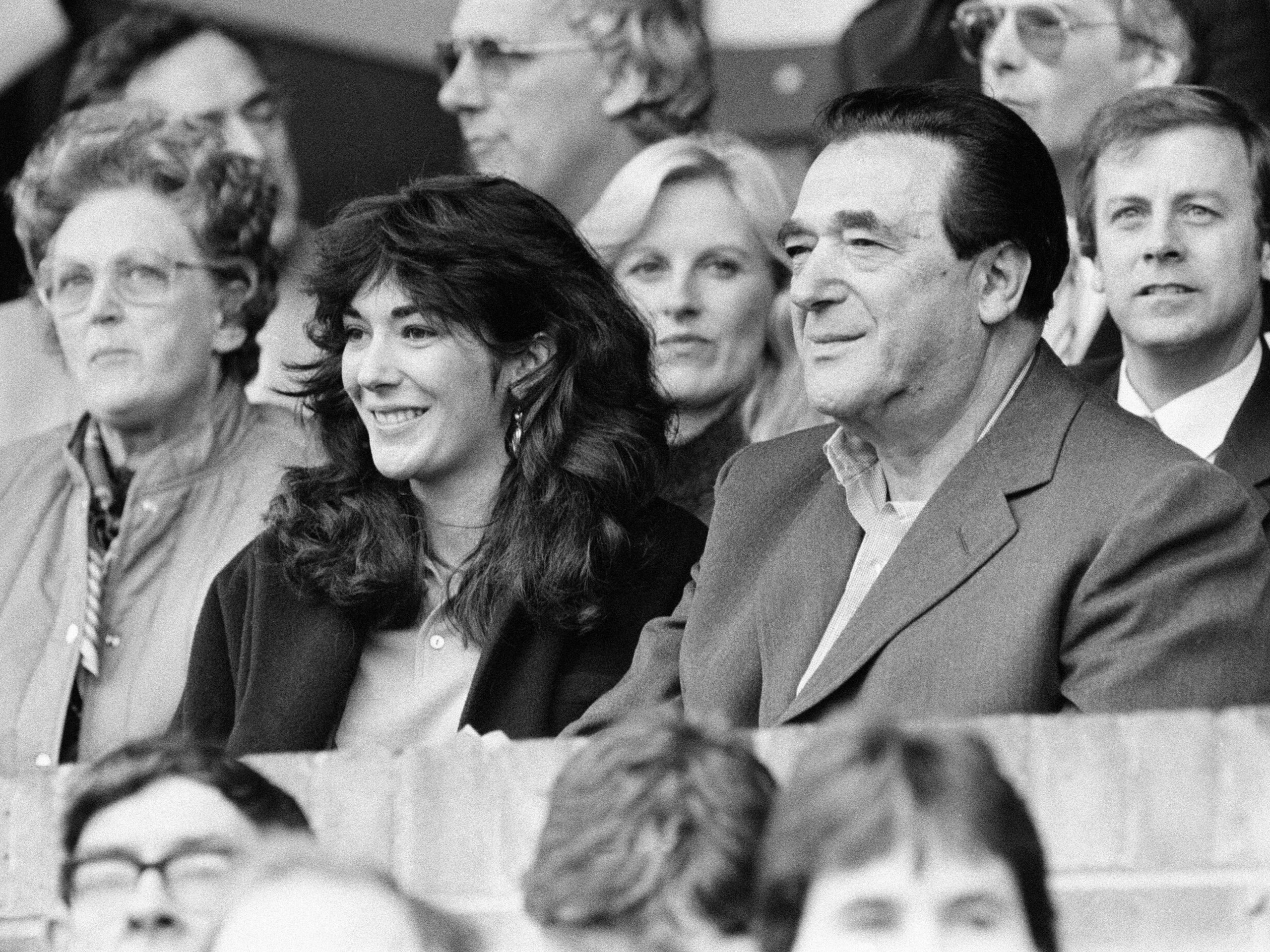 After years of scrutiny over her relationship with the late Jeffrey Epstein, Ghislaine Maxwell was sentenced Tuesday to 20 years in prison.

Maxwell, convicted in December of sexually abusing girls and trafficking them in order to have sex with Epstein, was also fined $750,000 and will be on probation for five years after her release.

Maxwell, a well-connected British socialite, posed for a picture with Elon Musk at a 2014 Oscars after-party and reportedly attended as many as three writing retreats — one of which was in 2018 — hosted by Jeff Bezos.

She’s also been accused of connecting Epstein with his alleged victims and serving as the now-deceased sex-offender’s madam. Maxwell worked with Epstein to “recruit, groom and ultimately abuse” children, her indictment states. Maxwell has denied these allegations.

Epstein, already a registered sex offender, was found dead in his jail cell after an apparent suicide on August 10. At the time of his death, he’d been awaiting trial in a New York jail.

But Maxwell’s family has plenty of scandals of its own, dating from the 1990s. Keep reading to learn more about the Maxwell family.

If you or someone you know is struggling with depression or has had thoughts of harming themselves or taking their own life, get help. The National Suicide Prevention Lifeline (1-800-273-8255) provides 24/7, free, confidential support for people in distress, as well as best practices for professionals and resources to aid in prevention and crisis situations. Ghislaine Maxwell, 58, is the youngest child of the late media mogul Robert Maxwell’s nine children. According to a 2011 report from The Telegraph, she was his favorite. All of Maxwell’s children were born in France, according to the Daily Beast.

Robert Maxwell was born Ján Ludvík Hoch in 1923 in Czechoslovakia, according to Encyclopedia Britannica. Despite losing most of his family in the Holocaust, Maxwell escaped to the United Kingdom during World War II, changed his name to Ian Robert Maxwell, and became an officer in the British Army.

After the war, Maxwell entered the publishing business by selling academic papers, according to Encyclopedia Britannica.

“Ghislaine’s father Robert Maxwell was one of the darkest and most mysterious men to appear in British public life,” the Daily Beast wrote. A printer at the Mirror Group Newspapers plant in London checks the first edition of the Daily Mirror, November 5, 1991. Robert Maxwell is on the cover.

The Daily Beast described Maxwell in 2019 as a “charismatic businessman” who was surrounded by an air of mystery.

In 1984, Maxwell purchased Mirror Group Newspapers, the publisher of six British newspapers, including the Daily Mirror.

According to the LA Times, Maxwell went on to expand his empire to include the New York Daily News, the publishing house Macmillan Inc., and the now defunct paper The European.

But the expansions caused financial troubles for the company. It was later discovered that Maxwell stole money from his other companies and employee pension funds to cover the newspapers’ debts, according to Encyclopedia Britannica.

Robert Maxwell considered Rupert Murdoch his rival, according to the Daily Beast. Maxwell tried to create a media empire that would rival Rupert Murdoch’s, the Daily Beast reported.

The two newspaper publishers posted opposing bids for British tabloid News of the World in 1969, according to the Daily Beast. Murdoch’s bid was selected. Maxwell also lost a bidding war for The Sun to Murdoch in 1969.

Various reports indicate that Robert Maxwell did not shy away from questionable business practices. Ghislaine Maxwell, daughter of late British publisher Robert Maxwell, reads a statement in Spanish in which she expressed her family’s gratitude to the Spanish authorities, aboard the “Lady Ghislaine” in Santa Cruz de Tenerife on Nov. 7, 1991.

Maxwell had the Daily Mirror’s offices bugged so that he could hear what the company’s executives were saying about him, according to the Daily Beast.

Maxwell engineered contests for Daily Mirror readers designed to prevent anyone from winning, according to the BBC. In one contest, any reader who could locate a football in an image printed by the paper was promised £1 million.

“He took aside the promotions manager and myself and he said, ‘Between you, I want you to make sure no one can win £1 million,'” former Mirror editor Roy Greenslade told the BBC.

In November 1991, Robert Maxwell was found dead in the Atlantic Ocean. Unidentified crew members on the deck of the Lady Ghislaine, in Santa Cruz, Canary Islands, November 7, 1991.

Robert Maxwell had been sailing off the coast of the Canary Islands aboard his 180-foot luxury yacht named after his daughter, Lady Ghislaine, according to the AP. Maxwell was missing from the yacht for 14 hours before his naked body was discovered.

Maxwell was set to meet with representatives of the Bank of England over his company’s unpaid debts the day after his disappearance, his sons told the Sunday Times 27 years after his father’s death, according to The Guardian.

The media mogul was 68 at the time of his death, according to the AP. Ghislaine was 30.

After an investigation, Robert Maxwell’s death was deemed to have been the result of natural causes. Ghislaine Maxwell, right, daughter of the late Robert Maxwell, looks on as the casket containing the body of Robert Maxwell is unloaded from a plane in Jerusalem, November 8, 1991.

According to The Guardian, Maxwell’s death was officially ruled to have been caused by a heart attack combined with accidental drowning.

But Maxwell’s cause of death became the subject of many conspiracy theories, Insider reported. His death had been widely speculated by the public to be a suicide because it occurred during a period of financial turbulence for his company.

Years after his father’s death, one of Maxwell’s sons spoke out against the suicide theories.

“In 27 years I’ve never speculated: Was he killed or did he kill himself?” Maxwell’s son Ian told the Sunday Times, 27 years after his father’s death, according to The Guardian.

“If I say anything about it, I think it is highly unlikely that he would have taken his own life. It wasn’t in his makeup or mentality. I don’t think any murder conspiracy stands up, so for me, it is an unexplained accident, and I’m content to live with that.”

Maxwell’s companies owed more than $4 billion to 43 different banks at the time of his death, according to the Daily Beast.

After her father’s death, Ghislaine Maxwell moved to Manhattan’s Upper East Side and began working in real estate. According to a New York Post story from 2000, she was living off about $100,000 a year from a trust fund her father had set up. Elisabeth Maxwell stands next to a photo of her husband before a dinner honoring them sponsored by the Yivo Institute for Jewish Research in New York, November 24, 1991.

Maxwell devoted her life to Holocaust research after her husband’s death, earning a doctorate from Oxford at age 60, according to The New York Times.

Before Robert Maxwell’s death, she spent her time managing the couple’s 53-room mansion in Oxford, The Times reported. Less than a month after his death, Robert Maxwell’s financial crimes erased the family’s fortune, forcing her to move out of the mansion and into a borrowed apartment.

Two of Ghislaine’s brothers, Ian and Kevin Maxwell, were tried with financial crimes related to their father’s businesses in 1996. Kevin (right) and Ian Maxwell, sons of publishing magnate Robert Maxwell, leave the High Court in London, Thursday, September 19, 1996, where a judge ruled that Kevin Maxwell will not stand trial a second time on charges relating to the collapse of the disgraced tycoon’s media empire.

Ian and Kevin Maxwell have been extremely private since the trial’s conclusion, HuffPost reported in 2018. The brothers now own a real estate and telecom businesses outside the UK. In 2018, they launched a think tank called Combating Jihadist Terrorism and Extremism, according to The Guardian.

Ian serves as CoJit’s director, according to the organization’s website. CoJit did not return ‘s request for comment.

The Maxwell siblings have been described as having kept low profiles in recent years. Ian Maxwell and his wife, Laura, celebrate in London in 1996 after brothers Ian and Kevin Maxwell, along with American financial adviser Larry Trachtenberg, were acquitted on charges of defrauding pension funds.

In a 2011 report titled “Whatever happened to the Maxwells?” The Telegraph said that Robert Maxwell was “famously good at covering his tracks,” and that it’s “hardly surprising his family has grown so skilled over the past two decades at simply disappearing.”

Ghislaine’s other siblings include Anne, Christine, Isabel, and Philip Maxwell, according to The New York Times. Anne is a former actress who worked as a hypnotherapist in Surrey, The Telegraph reported in 2011. Christine launched an internet company. Phillip was said to be in London launching a career as a writer.

As of the 2011 Telegraph article, all of the siblings were reported to have a close relationship with one another.

Ghislaine spent her time rubbing noses with some of the country’s most powerful CEOs, including Jeff Bezos and Elon Musk. Ghislaine attended Jeff Bezos’ invite-only writing retreat for authors and entrepreneurs three times, most recently in 2018, attendees told Motherboard’s Ben Makuch. The event, which is called Campfire, is held annually in Santa Fe, New Mexico, previously reported. She did not attend the most recent conference in October 2019, Vice reported.

Ghislaine was also photographed with Elon Musk at an Oscars after-party in 2014, previously reported. A Musk spokesperson told that “Ghislaine simply inserted herself behind him in a photo he was posing for without his knowledge.”

Musk has confirmed crossing paths with Epstein at least once. Musk, Epstein, and Facebook CEO Mark Zuckerberg were all guests at a dinner hosted by LinkedIn CEO Reid Hoffman sometime after Epstein was released from jail in 2008. Ghislaine was a close associate and former girlfriend of Epstein, previously reported. An Oxford-educated socialite, she has been photographed alongside many powerful people, including President Donald Trump and Elon Musk.

Maxwell is now alleged of having helped him find underaged victims to use as sex slaves. The former socialite worked with Epstein to “recruit, groom and ultimately abuse” children, her indictment states. She has denied these allegations.

After Epstein’s death in August, it was speculated that the investigation into him could refocus on her. But, as ‘s Michelle Mark reported, her location was hard to track down: Maxwell had reportedly not been seen in public for three years.