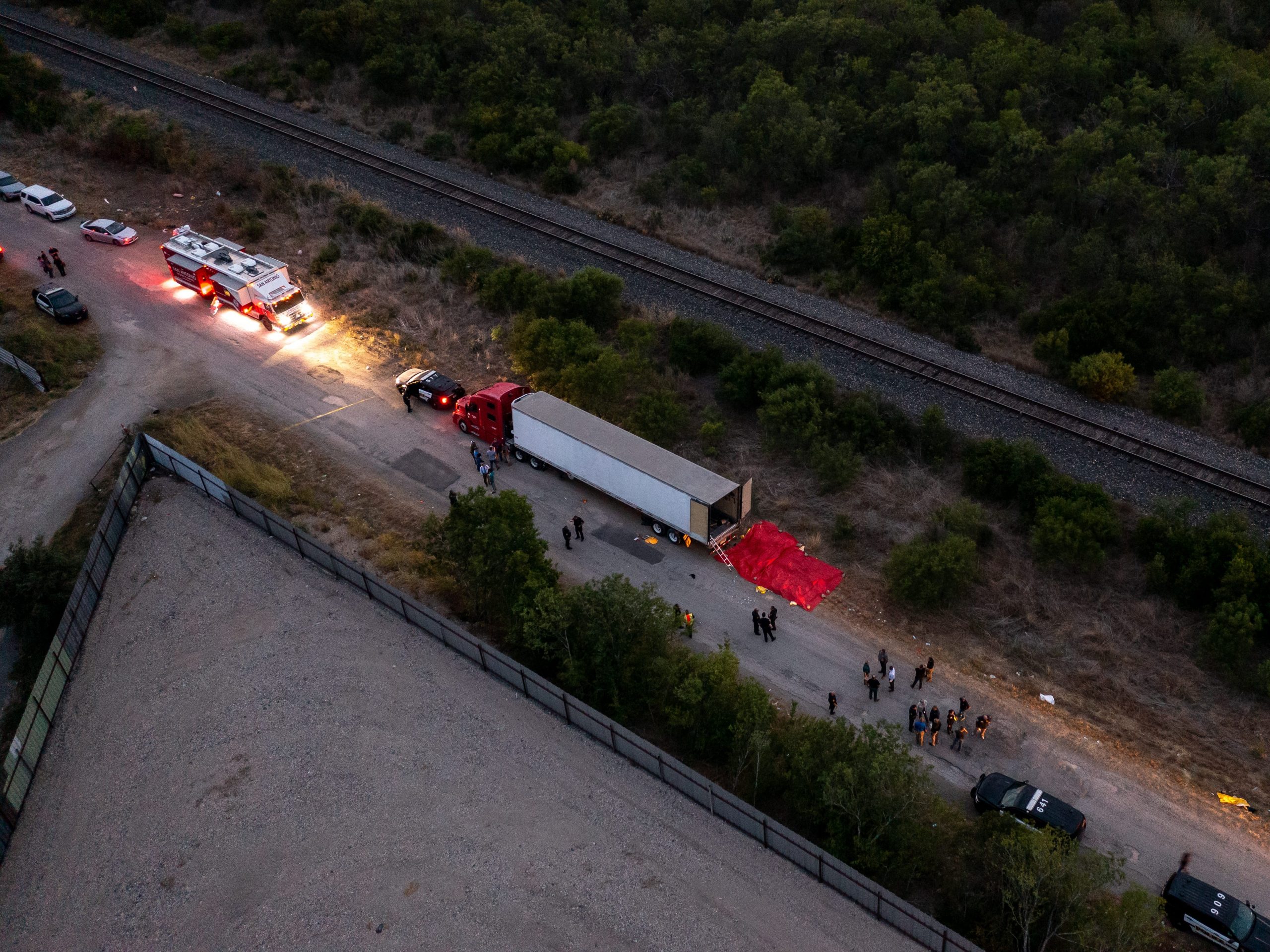 Aerial view of a truck where dozens of people were found dead during a heat wave, on June 27, 2022.

Dozens believed to be crossing into the US from Mexico, Guatemala, and Honduras were found dead inside a tractor-trailer in the sweltering Texas heat on Monday, according to local officials. The state was enduring a record-breaking heat wave, with temperatures above 100 degrees that day.

Sixteen people, including four children, were found alive and taken to hospitals. The survivors were “hot to the touch” and dehydrated, San Antonio Fire Chief Charles Hood said at a press conference Monday, adding, “They were suffering from heat stroke, heat exhaustion.”

By Wednesday, the death toll had risen to 53 people, according to the Bexar County Medical Examiner’s Office. Federal law enforcement officials told CBS that it appears to be the deadliest human smuggling case in modern US history.

People who cross the US southern border from Mexico face many hazards — and as heat waves become more common and severe due to climate change, that journey is getting even more perilous.

Dangerous heat gripped the US in June

Unrelenting heat waves struck many parts of the US in recent weeks, prompting authorities to issue excessive heat warnings and advisories across the country. Earlier this month, a heat dome settled over the West and shattered temperature records from coast to coast. Since June 15, at least 113 weather stations across the country registered temperatures that tied or broke record highs, PBS News Hour reported.

A growing body of research suggests heat waves are becoming more frequent and severe as the planet warms. Cousins have a water gun fight at a park near their home in Houston, Texas, while the state was under a heat wave alert, on June 10, 2022,

A study published Tuesday in the journal Environmental Research: Climate drew upon hundreds of attribution studies — which seek to tease out whether, and by how much, climate change may play a role in extreme weather events — and the latest reports from the UN’s Intergovernmental Panel on Climate Change, to evaluate how climate change affects heat waves, droughts, heavy rainfall, and wildfires.

“Pretty much all heat waves across the world have been made more intense, and more likely, by climate change,” Ben Clarke, study author and environmental scientist at the University of Oxford, told Reuters. The paper concluded that heat waves are becoming up to 10 times more likely in some areas because of climate change.

The study authors also noted that there were 157,000 heat-related deaths around the world officially reported between 2000 and 2020, which they say could be an undercount.

The treacherous search for a better life

Crossing the US-Mexico is already a lethal trek: At least 650 people died while trying to reach the US through that border last year, according to the United Nations’ International Organization for Migration. That’s more than any other year since the agency began keeping records of deaths in 2014.

Monday’s deaths are the latest in a string of cases in which large groups of migrants died while being smuggled into the US, often inside vehicles during hot summer months. In July 2017, 10 migrants were found dead from heat-related conditions in a trailer in a Walmart parking lot in San Antonio, about 3 miles northeast of the latest incident. Colorful crosses left behind after police impounded the tractor-trailer where dozens of people were found dead in sweltering conditions, in San Antonio, Texas, on June 28, 2022.

US border policy and heavy Border Patrol presence along safer routes of passage are pushing a growing number of migrants to cross in more remote areas along the border, according to Sam Chambers, a geospatial researcher at the University of Arizona. Migrants were stopped nearly 240,000 times in May, with stops up by one-third from last year, The Associated Press reported.

“Border crossers must take journeys which are both longer in time and distance and more physically strenuous in order to circumvent the surveillance apparatus,” Chambers told Insider.

The majority of known deaths of people crossing the US-Mexico border are related to exposure to harsh temperatures and terrain, according to Chambers. Chambers and his colleagues say migrant remains are increasingly being found in high-elevation areas. As migrants cross hotter stretches of the desert, they may be pushed to climb to high areas in seek of shade and slightly cooler temperatures, but they’re still dying of heat-related conditions like dehydration and overexertion.

Extreme heat can overheat and dehydrate the human body, especially when people spend long periods of time outside. Exposure to extreme heat is one of the top weather-related causes of death nationwide, according to the Centers for Disease Control and Prevention.

“Climate change may very well increase risk and mortality as more places become less hospitable, but this is by and large, an effect of border militarization,” Chambers said of migrants crossing hotter and more remote parts of the desert.

According to José de León, an anthropologist at University of California, border policies funnel people seeking to cross the border to deserts in Texas, Arizona, and New Mexico. “They now have to walk six or seven days, through the woods, where they’re exposed to these extreme environments,” de León told Insider.

In a December of 2021 study, de León and other researchers looked at the risk of dehydration and hyperthermia that migrants face in the Arizona desert.

“We’ve been able to basically show that it’s nearly impossible to carry enough water to survive a multiday trek. By attempting to do those things, you’re putting yourself at a high risk for death,” de León said, adding, “As temperatures rise, it’s only going to get worse.”