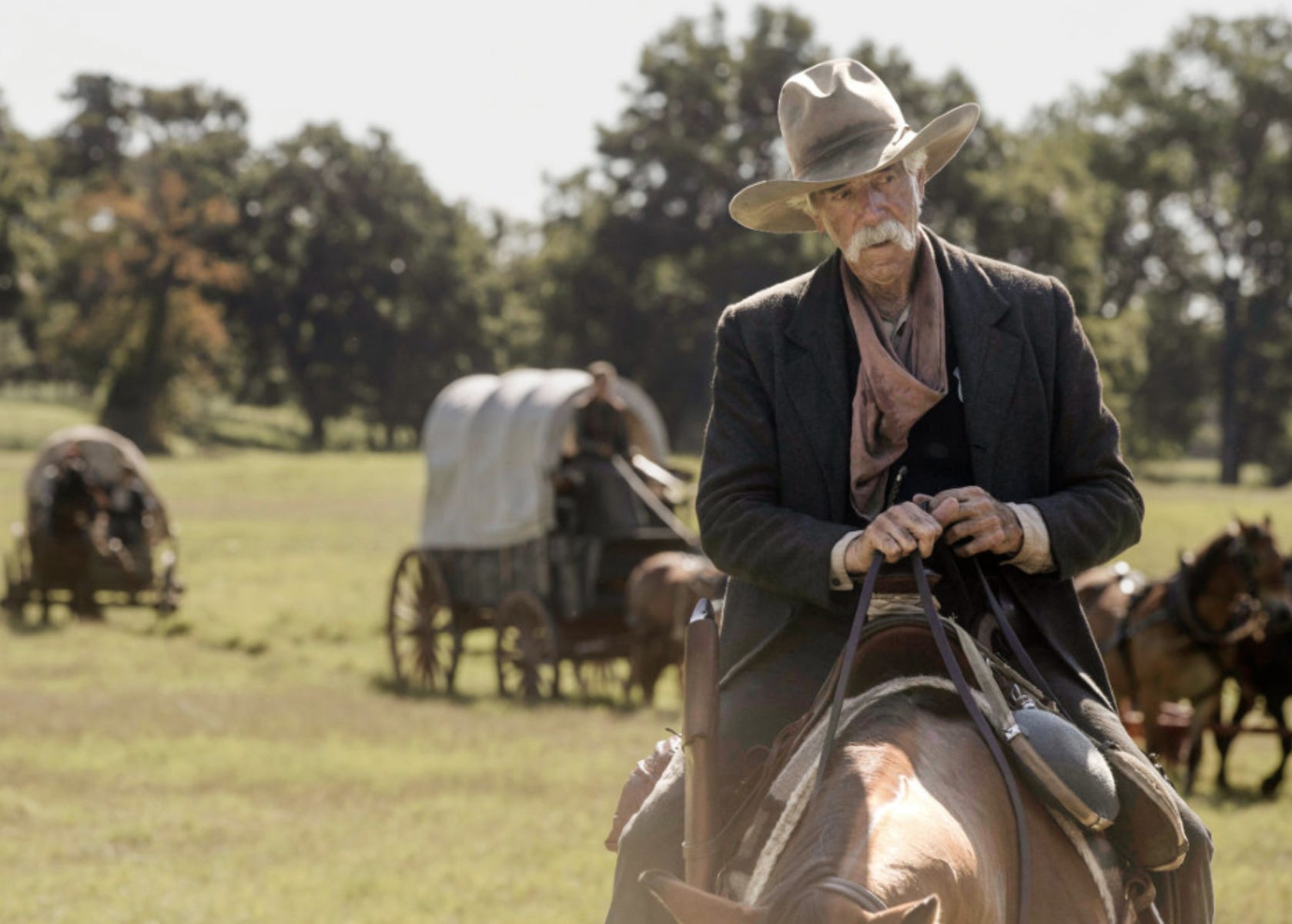 I took quite a few notes while watching “1883,” Paramount+’s prequel series to Paramount Network’s “Yellowstone” — the biggest show on cable TV.

The most enthusiastic note I jotted down was, “Tom Hanks?!?” The two-time Oscar winner shows up briefly at the beginning of the show’s second episode in a flashback sequence as George Meade, a real-life Union general during the Civil War.

Hanks grumbles maybe two words and pats Tim McGraw’s character James Dutton on the shoulder before taking him prisoner in the aftermath of the war. Then the opening-credits sequence begins to roll.

It’s a testament to “Yellowstone” and “1883” creator Taylor Sheridan’s influence that he’s able to enlist such big stars for small roles (Billy Bob Thornton appears later in the episode as a Marshal in a recurring role). Sheridan recently renewed a mega deal with Paramount’s parent company ViacomCBS and is developing more shows for the Paramount+ streaming service, including another “Yellowstone” spinoff. Sheridan’s deal is worth nine figures, according to The Hollywood Reporter.

It’s no surprise that ViacomCBS would want to court Sheridan. “Yellowstone” — which stars another superstar in Kevin Costner as powerful rancher John Dutton — has grown immensely in popularity. Its season-four finale was watched by 9.3 million viewers on January 4, making it the biggest cable telecast since 2017. The success of “Yellowstone” piqued my curiosity.

The problem was that the first three seasons of the show were only available to stream on NBCUniversal’s Peacock, which nabbed the streaming rights in 2020, before the March 2021 launch of Paramount+. I don’t pay for Peacock Premium, so I’d only be able to watch the first episode for free.

It’s not exactly a best-case scenario for ViacomCBS, but the company is making the best of it with Sheridan in its corner. It said that “1883” was Paramount+’s most-watched original series debut yet.

So, without access to “Yellowstone,” I dove into “1883” on Paramount+, which I do have a paid subscription to.

Fortunately, one doesn’t need to have watched “Yellowstone” in order to understand what’s happening and like “1883,” and critics largely agree. The show has an 85% critic score on Rotten Tomatoes. Variety’s review said: “‘1883’ has the characters, the scope, and the vision to become an exciting new chapter of the ‘Yellowstone’ franchise, as well as a rare example of a spin-off that never feels beholden to its source material.”

The show is an old-fashioned Western that stars Sam Elliot, real-life couple McGraw and Faith Hill as James and Margaret Dutton, and Isabel May as their daughter Elsa, who lends some heavy-handed narration to the series with lines like, “God lit this day with candles.”

The show follows the Duttons on a journey across the American West, which I assume will eventually lead them to the ranch depicted in “Yellowstone.” The only benefit in watching “Yellowstone” might be more of an investment in the Duttons and their family lineage, but it’s not a prerequisite. While I haven’t seen “Yellowstone,” I have enjoyed some of Sheridan’s other work. The Oscar-nominated movie “Hell or High Water,” which he wrote, is one of the great modern-day Westerns.

“1883” showcases Sheridan’s enthusiasm for cowboy tales (he grew up on a ranch in Texas) with authentic and gorgeous scenery. It apparently wasn’t easy, though. The New York Times recently detailed the harsh five-month shoot that was still going into January, after the series had debuted. Elliot told the Times it was “difficult” but ultimately worth it.

“We’re getting it onscreen, and in the end that’s what matters,” Elliot told the Times. “This is really going to be something special.”

And the series is special, in the sense that it showcases how Paramount+can capitalize on the success of a hit cable series it doesn’t have the streaming rights to. Sheridan and “Yellowstone” are brands now, same as Paramount+’s other franchises or brands, from “Star Trek” to Nickelodeon. In a crowded streaming landscape, popular brands and franchises matter.

ViacomCBS added 4.3 million global subscribers in the thid quarter across its services, including Paramount+ and Showtime, increasing its total paid streaming users to 47 million. We’ll learn more next month during an investor update about how Paramount+ is performing since the premieres of “1883” and Sheridan’s other, non-“Yellowstone” series “Mayor of Kingstown.”

In the meantime, I’ll likely stick with “1883.” I’ve watched the four episodes that are available and episode five drops on Saturday. Maybe I’ll even become invested enough in the “Yellowstone” universe to pay for Peacock.