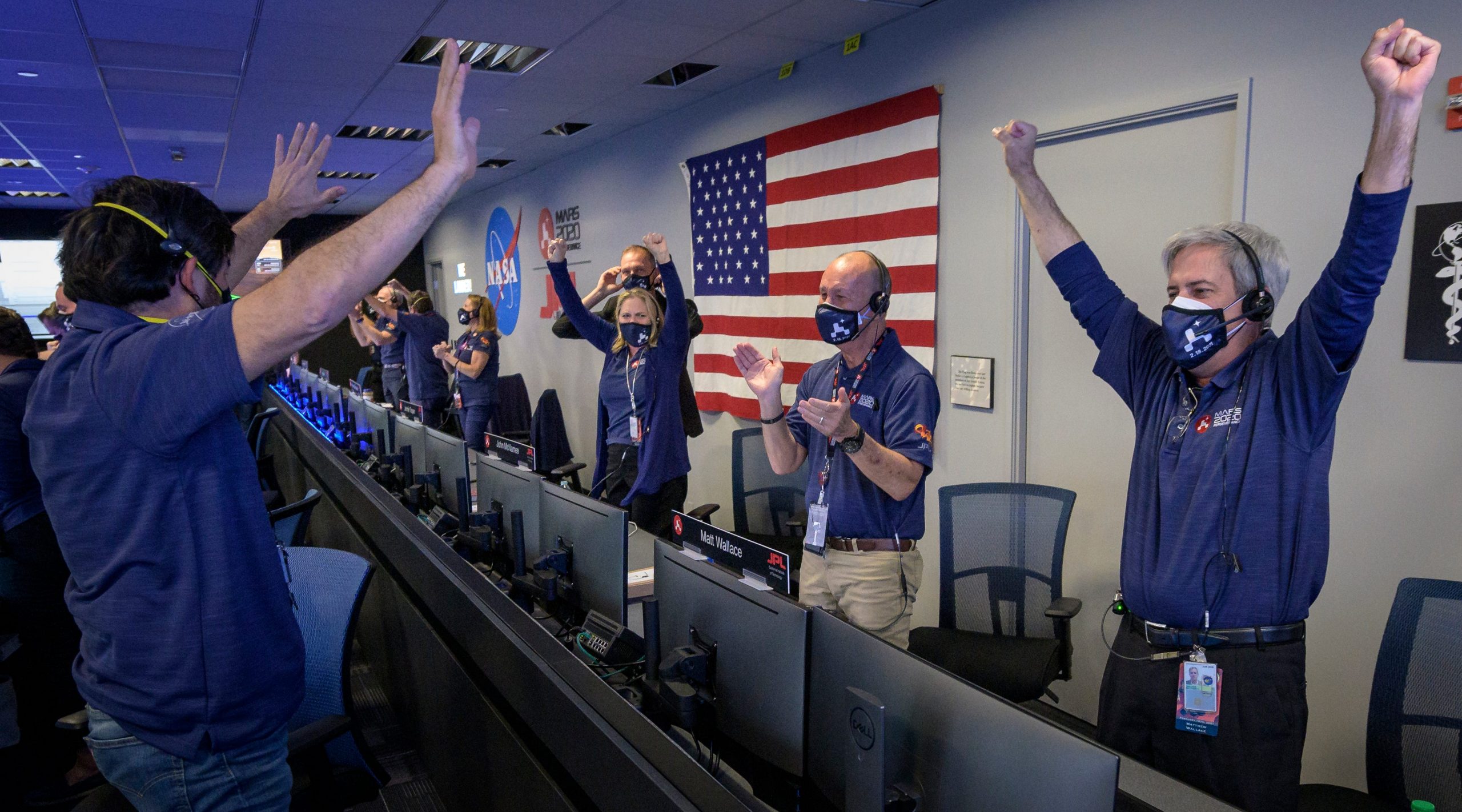 In this handout image provided by NASA, members of NASA’s Perseverance rover team react in mission control after receiving confirmation on February 18, 2021, at NASA’s Jet Propulsion Laboratory in Pasadena, California, that the spacecraft successfully touched down on Mars.

In a week when the James Webb Space Telescope beamed otherworldly photos back to Earth, the National Aeronautics and Space Administration can celebrate something more terrestrial: it’s among the best places to work in the federal government, according to a new study.

NASA, which placed first among large agencies in the annual Best Places to Work in the Federal Government report for the 10th straight year, has consistently made purposeful, transparent, and obvious investments in its people, said Loren DeJonge Schulman, vice president of research, evaluation, and modernizing government at the nonprofit Partnership for Public Service, which co-sponsored the study with the Boston Consulting Group.

The Department of Health and Human Services and Department of Commerce also ranked highly among large agencies. The Government Accountability Office and National Science Foundation scored top marks among mid-sized agencies, while the Pension Benefit Guaranty Corporation, National Endowment for the Humanities and Office of Special Counsel ranked highly among small agencies.

Among mid-sized agencies, the National Labor Relations Board and Court Services and Offender Supervision Agency were laggards, while the Federal Election Commission and International Boundary and Water Commission ranked last among small agencies.

Meanwhile, the Federal Trade Commission fell from its number two spot in 2020 to 22nd place in the 2021 mid-size agency rankings while the Federal Mediation and Conciliation Service took a nosedive from 11th to 24th, signifying the largest drop among small agencies.

Overall federal employee engagement and satisfaction decreased slightly from 2020 to 2021, and now stands at a score of 64.5 out of 100. The Social Security Administration’s Office of Inspector General ranks at the bottom of an annual survey of federal government workers’ job satisfaction.

The rankings, in its 16th edition, offer a comprehensive assessment of how federal workers view their jobs and workplaces, “providing employee perspectives on leadership, pay, innovation, work-life balance and other issues.”

Among agency subcomponents, the National Science Foundation’s Directorate for Education & Human Resources ranked first, while the Social Security Administration’s Office of the Inspector General finished dead last, at No. 432.

The decrease in employee engagement and satisfaction came during President Joe Biden’s first year in office, during which the administration saw more than half of its administration nominees requiring Senate confirmation fully confirmed. That’s slightly higher than former President Donald Trump, but considerably lower than Barack Obama and George W. Bush.

“Noting that this is the first year of the Biden administration, it’s going to be a period of dynamism and change for every agency as they get new leaders on board and they cope with priorities and new missions,” Schulman told Insider.

Schulman, who’s served in key roles at both the National Security Council and Department of Defense, said while she can’t speak much to agencies’ individual experiences, employees’ opinion of their leaders has consistently driven whether an agency receives a strong employee satisfaction score.

“Particularly around the FTC, I think looking at issues around leadership change and some of the issues associated with returning to the office, definitely impacted them as well,” Schulman said. “And I think for any agency that is seeing that their rankings went down, should be paying very close attention to matters around effective leadership, particularly when it comes to senior leaders and supervisors.”

Among the survey’s other findings across all agencies:

In an effort to respond to many of the concerns federal employees are raising, the Biden administration for 2023 has proposed one of the largest pay raises for federal employees — 4.6% — in the last 20 years. The raise is a significant improvement from the 1% across-the-board pay increase they saw in 2021.

Schulman noted that the rankings are important, as it “serves as a great barometer and report card for agencies around what they’re doing well and where they need to improve.

“It gives them a chance to listen to their employees around what’s working and what’s not,” she said. “And when employees have better satisfaction, they are more likely to serve the American people better.”