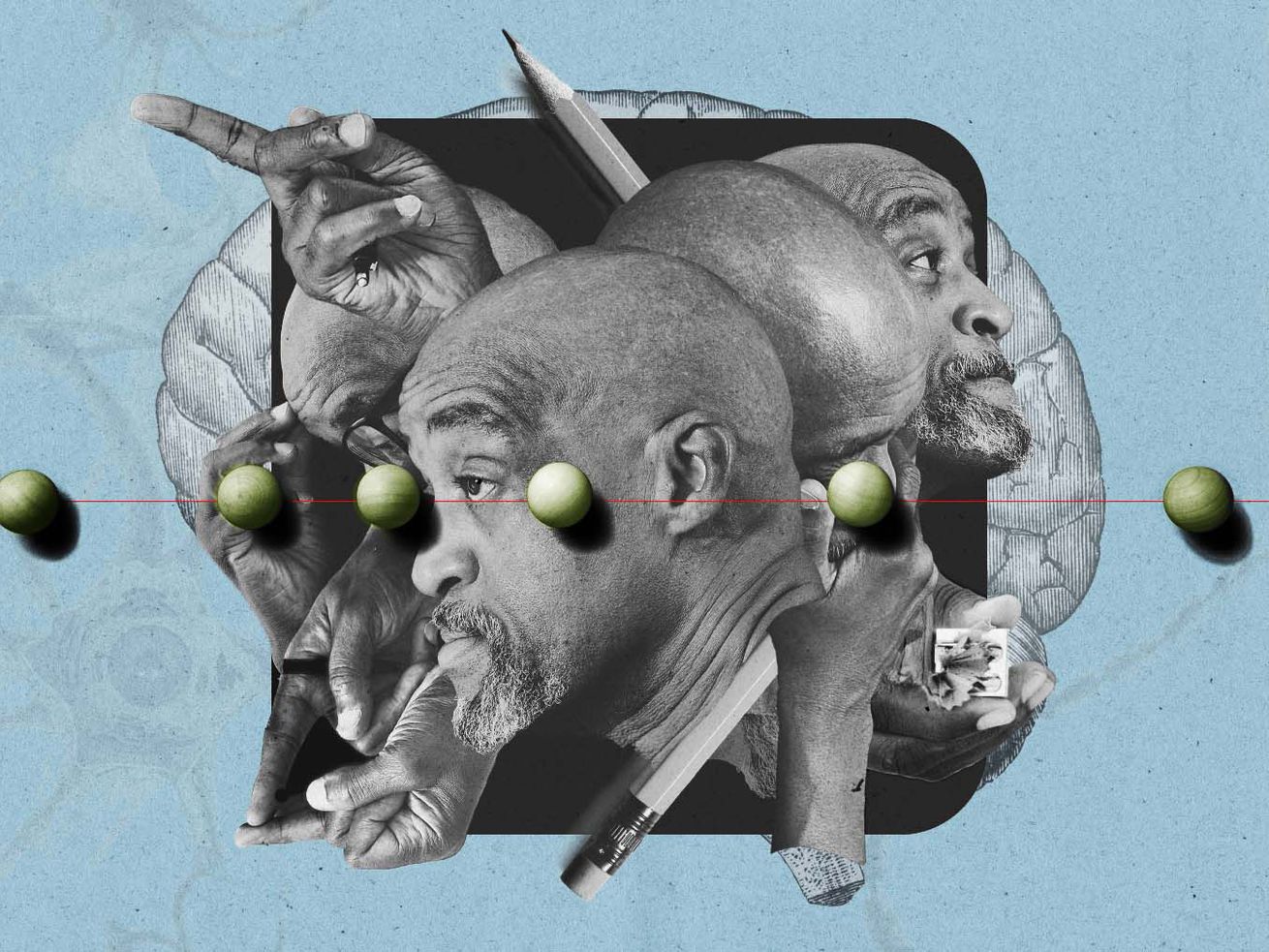 One morning this summer, I sat at my desk feeling restlessness boil inside me. I’d recently moved from a chaotic and deadline-driven job to one with a lot of downtime and zero pressure. On paper it sounded amazing, but I was putting off projects for weeks.

The tasks were either overwhelmingly big or mind-numbingly boring. And I was starting to feel guilty about not getting them done.

Then, in a panic, I’d pull an all-nighter, relying on a caffeine-fueled crunch to get me to the finish line. The next day, feeling deflated, depleted, and embarrassed by the quality of my work, I’d crash.

After a few of these vicious cycles, I worried that I was either too burned out to muster any strength or discipline, or that decades of multitasking had broken my brain. Trying to focus and prioritize was like listening to a symphony in which all of the instruments were always center stage, all playing at the same volume at the same time.

So I scheduled an appointment with a psychiatric nurse, who, after an hour and a half phone session, diagnosed me with attention deficit hyperactivity disorder (ADHD).

ADHD — a neurodevelopmental disorder marked by varying degrees of inattention, hyperactivity, and impulsivity — is more common in children, affecting more than 9 percent of kids under the age of 18 in the US, according to 2016 data from the Centers for Disease Control and Prevention. Estimates of the prevalence of ADHD in adults vary significantly, but a 2016 study published in the journal Attention Deficit and Hyperactivity Disorders found that nearly 3 percent of adults globally have received the diagnosis. Another study of US cases reported a 123 percent increase in adult ADHD diagnoses from 2007 to 2016, four times the increase in ADHD diagnoses among children.

My diagnosis was both a blow and a relief.

I left the appointment with a prescription for Adderall, a stimulant that increases dopamine and norepinephrine levels in the brain to improve motivation and focus. (Doctors also often prescribe cognitive behavioral therapy, a form of psychotherapy that can help challenge negative thought patterns that can lead to anxiety or addictions.)

Discovering mindfulness for the ADHD brain

The Adderall worked like a charm. I felt calmer, my attention only pulled in a few directions, rather than 100. But it also felt like a temporary fix. Adderall works on a day-to-day basis and doesn’t help rewire your brain to help build focus over time.

I’d heard mindfulness practices could be useful for attention training and longer-term emotional regulation, and were backed by a strong body of scientific evidence. Could they work for ADHD too? I ended up on a website called MindfullyADD.

I tried something called a “1-Minute Do-Nothing Practice,” described as a way to build tolerance to boredom. There was near-constant narration to help hold my focus, but it was still agony: I wanted to check my phone, straighten up my desk, pick up my matcha.

Next, I tried a “1-Minute Elevator Practice,” a narrated exercise that asks you to bring your hands together at your belly button, and then move the top hand up with your inhalations and back down with your exhalations. This was remarkably more effective at helping me focus, as I had something to track: my breath.

I started adding these practices to my day, randomly, whenever they fit in. And I began to see how fast and furiously my brain switched from one task or thought to the next.

I went through moments of self-loathing, thinking, “mindfulness should be easy for me.” (I had a meditation practice, but sitting for 30 minutes, focused on a single object, had been, if I was honest with myself, overwhelming.)

Often, I felt too tired or busy to practice even the short mindfulness practices on MindfullyADD. The growing awareness of my distracted and disjointed mind became really uncomfortable. But I was starting to find pauses between the distractions and thoughts, which felt empowering.

Casey Dixon, the strategist behind MindfullyADD and the founder of a program called Live Well ADHD, told me that my situation was not unusual. “Right now, most people who are getting diagnosed are women who are not in their 20s anymore and who are learning suddenly that a lot of their lifestyle habits are related to ADHD.” (I’m 46.) And one of the biggest obstacles her clients face is following through on work and life plans.

After experiencing some of the benefits of mindfulness firsthand, I called up Lidia Zylowska, a psychiatrist at the University of Minnesota Medical School and the author of The Mindfulness Prescription for Adult ADHD, to find out how the brains of people with ADHD are different from other people who feel distracted.

Many people, she said, have ADHD-like symptoms, including difficulty focusing and organizing, when we’re faced with stressful situations, inadequate sleep, burnout, and unrelenting bad news in the media. “But if you have actual ADHD, you have these symptoms even when you’re not stressed.”

Studies that track what’s happening in ADHD brains through imaging, or functional magnetic resonance imaging (fMRI), have shown atypical activity in neural networks associated with cognitive control, attention, and working memory. In addition, parts of the brain related to emotional regulation and motivation may look different in people with ADHD. Imaging also shows that the default mode network (DMN) — which is linked to mind wandering — is more active in people with ADHD when they are attending to tasks.

Some people with ADHD have enough coping strategies and support to mask it. But then the context changes and their symptoms can become less manageable.

A couple of common pain points are when people move into jobs with less structure and they are expected to self-manage throughout the day (aha!), and when people become parents and have to manage more than just themselves. For women specifically, hormonal changes, particularly during perimenopause, can bring ADHD to the surface.

Some of the psychiatric nurse’s questions made me realize that constant triaging at work had become my coping strategy. I also started thinking about patterns of procrastination that went as far back as elementary school. I started to see that I’d always been paralyzed by the fear of not completing something perfectly. I’d set myself up, over and over, for failure.

Mindfulness, the practice of present-moment awareness without judgment, has a nearly 5,000-year history with roots in Hinduism, Buddhism, and other Eastern religions and philosophies. It has been studied in the US since the 1970s for various mental health issues, including stress, anxiety, depression, addiction, and pain management.

One of the first major research studies to look at mindfulness as a treatment for ADHD was done by Zylowska, when she was working at the Mindful Awareness Research Center at the University of California Los Angeles. Her original study, published in 2007 in the Journal of Attention Disorders, looked at the effects of a mindfulness program on adolescents and adults with ADHD.

The 24 adults and eight adolescents in the study were asked to practice sitting meditation, body and breath awareness, mindful listening and speaking, and self-compassion on a daily basis for eight weeks. Afterward, they reported improvements in their symptoms, tested better on attention tasks, and even saw reduced symptoms of anxiety and depression. Zylowska and her colleagues concluded that mindfulness could be an effective intervention in some adults and adolescents with ADHD — yielding improvements in overall ADHD symptoms — but that a controlled clinical study was needed.

Since 2007, there have been dozens of other studies, some with small sample sizes and no controls, others with larger sample sizes and active controls that support the use of mindfulness for ADHD, says John Mitchell, an associate professor of psychiatry and behavioral sciences at the Duke University School of Medicine.

A 2021 research review of 31 studies on mindfulness for ADHD, published in the Journal of Affective Disorders, concluded that mindfulness is just as effective as, if not slightly more than, education and life skills training for treating adults with inattentiveness. The evidence isn’t in for mindfulness and children with ADHD.

Both Zylowska and Mitchell agree that more research would help determine which mindfulness practices are best for different folks with ADHD. “The research is in early stages, compared to other interventions for ADHD,” says Zylowska. Based on the existing data, if symptoms of ADHD are mild to moderate, mindfulness may be a great stand-alone treatment, says Zylowska. But if symptoms are severe, people with ADHD may want to use mindfulness as a complement to other treatments

How to adapt mindfulness practices for ADHD

Meditation and mindfulness may not at first seem like a good fit for chronically restless ADHD people, says Mitchell.

That’s why Zylowska’s eight-week program includes both “formal” seated or walking meditation and “informal” mindfulness, like being present with tastes, sounds, textures, and sounds while you eat. You start with practicing for five minutes and work your way up to 15. If five minutes is still too much, Zylowska says, start with three.

“When you have ADHD, you have to find solutions that are easy enough to fit into your life,” explains Dixon. “If they create a lot of friction, they won’t get done.”

Zylowska agrees: “These are not new practices, but we are making them more accessible to people who have difficulty sustaining attention.” They are shorter, are introduced more gradually, and have more variety, so you can experiment with what works for you.

You can also tailor the practice depending on the type of distractibility or ADHD you have. If you have more hyperactivity and impulsivity, you may want to focus on mindful movement. If this is all overwhelming, just think of an activity that already helps you calm down, like cooking or gardening, and do more of that, with awareness, advises Zylowska.

One minute at a time

As I continue with the practices from MindfullyADD, I start to feel more space in my brain and my life. I try to practice daily, even if just for a minute. While I can still procrastinate and overcommit, this one-minute-at-a-time approach has ultimately translated into a one-step-at-a-time effort at work. (I still take Adderall, but infrequently.)

I can now better tolerate mind-numbing spreadsheets, and I can read for more than five minutes at a time. I don’t beat myself up about not accomplishing more. Instead, I celebrate the small wins, take conscious breaks that help me reset and feel less enmeshed with work, and I feel perfectionism and black-and-white thinking losing their hold.

Dixon reminds me to keep it simple: “You don’t need to have the perfect mindfulness set-up and practice, just pick something and try it.”

Tasha Eichenseher is a science and wellness writer based in Boulder, Colorado.