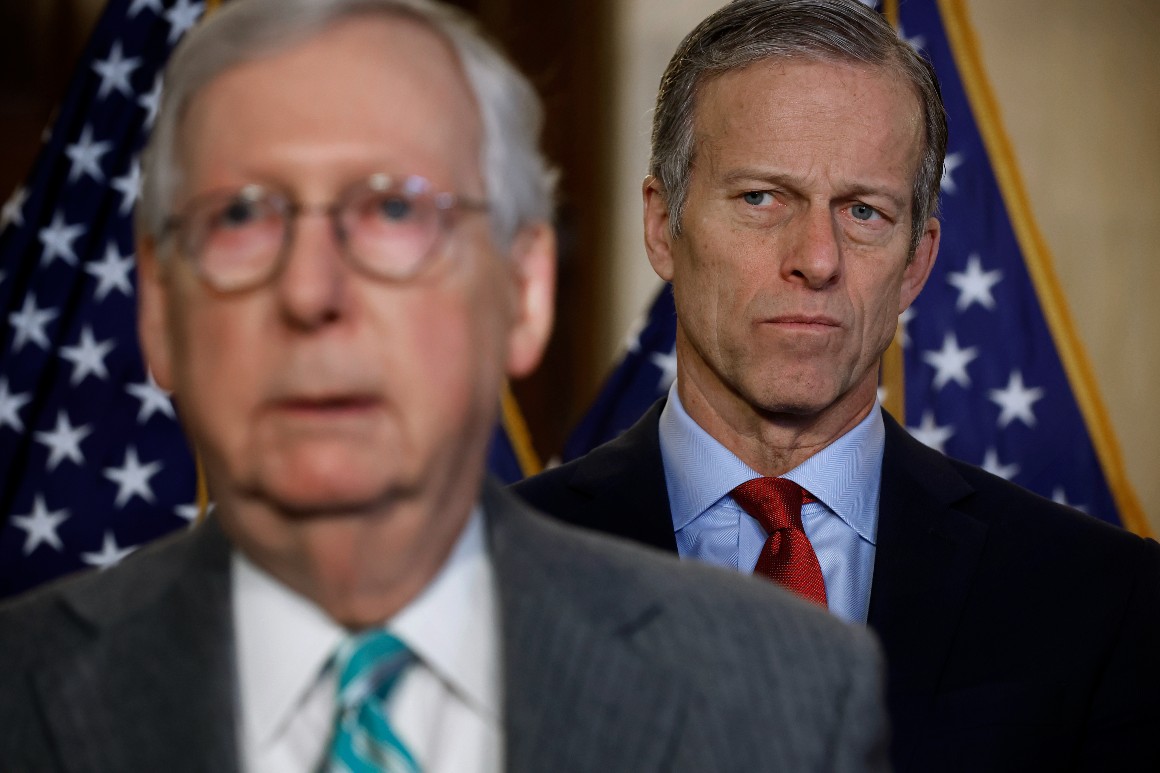 When Mitch McConnell steps down as Senate GOP leader, which won’t happen anytime soon, John is sure to replace him.

The question confronting Senate Republicans now is: Which John?

The decision by Senate Minority Whip John Thune to run for reelection sets up an intricate shuffle among a trio of Republicans named John to succeed McConnell. There’s Thune the South Dakotan, McConnell’s current deputy, as well as former whip John Cornyn of Texas, the two favorites to succeed the GOP leader. Then there’s John Barrasso, the No. 3 Senate GOP leader whom Republicans believe is likely to ascend to the whip job first as Cornyn and Thune compete to succeed McConnell.

McConnell confirmed Tuesday he’ll seek to remain party leader after this fall’s midterms, no surprise given his goal of surpassing the late Sen. Mike Mansfield’s record for leadership longevity a year from now. Thune’s pursuit of a fourth term, however, has left the Senate GOP newly abuzz over who might take the reins post-McConnell, since political trajectories can change in an instant in the Senate. Thune agonized for nearly a year over running again, a choice complicated by former President Donald Trump’s attacks on him for dismissing Trump’s efforts to challenge Joe Biden’s win. Yet Trump’s attacks ceased, and as he measured his future, Thune said the possibility of one day becoming Republican leader “put additional weight on the side of staying around, for sure.”

“Hopefully we get the majority back and at some point — nobody knows when exactly that might be in the future — there probably will be some opportunities. And I never rule anything out,” Thune said in a Tuesday interview.

As whip, Thune has the clearest path to the job in the eyes of some Republicans until he is term-limited out of his job in 2025. The 61-year-old once mulled running for president but has committed himself to the Senate after passing on national ambitions.

But Cornyn, 69, brings his own formidable resume: He ran the National Republican Senatorial Committee for two cycles, served as whip for six years and is still a McConnell confidante at the leader’s table of advisers. Where Thune can be low-key, Cornyn brings a more pugnacious style that leads some other Republicans to see him as a natural successor to McConnell. Thune declined to describe himself as the favorite despite his comfy spot in leadership: “I’d hate to say that. And I’m Scandinavian, so the glass is always half empty.” He downplayed any conflict with Cornyn, whom he said is his friend.

Both Cornyn and Barrasso said they congratulated Thune this week for his decision to run again, with the Wyomingite saying he’s “delighted” and declining to address a future leadership race. Cornyn said Thune is “a very important part of our conference and has a lot to offer,” while underscoring that a reelection run is a separate question than who succeeds McConnell.

“That is something I’d like to pursue,” Cornyn said Tuesday of the Senate GOP’s top spot. “It’s a unique sort of a race because you know who the voters are, and it’s not really influenced by outside influences. It’s really more of a matter of relationships and trust.”

The last leadership change on the Democratic side happened in a near-instant, with the late Sen. Harry Reid (D-Nev.) announcing his retirement and immediately endorsing Sen. Chuck Schumer to succeed him. Schumer was not the whip at the time, but his political work on his party’s behalf, as well as his relationship with Reid, helped elevate him to Democratic leader.

There’s no sign McConnell would give a Reid-style boost to either Cornyn or Thune, though he publicly encouraged Thune to run again. Still, even with McConnell’s term not over until 2026, Republicans know that things can always change — and change quickly.

Thune “has poised himself to [move up] with the responsibilities that he has taken on as whip, and he has poised himself to do so with relationships with just about all of us in the conference,” said Sen. Lisa Murkowski (R-Alaska). “Sen. Cornyn has as well. The great thing for us is, you have a couple of really exceptional individuals that can step up if McConnell decides to step out.”

Sen. Susan Collins (R-Maine) said the GOP is “fortunate to have the three Johns” to choose from. And though she said Cornyn and Barrasso would do a “very good job,” she’s one of the few GOP senators willing to weigh in on the shadow leadership race.

“John Thune presents a great image for our party. He has been involved in a lot of different issues. He’s served on diverse committees. He understands the variety of personalities that he needs to deal with,” Collins said. “As the second-highest-ranking person in leadership, to me he’s the logical successor.”

Cornyn’s power base stems from his time as whip and party committee chair in 2010 and 2012 as well as his continued fundraising prowess for the party and handy reelection win in 2020 after Democrats tried to make Texas a battleground state. Thune has accrued internal support with the help of personal dinners, massive financial transfers to the party committee and his role as current party whip.

Both senators said their most important election right now is this November, when they have a real shot at taking back the majority. But as one Senate Republican put it, the potential competition between the two sets up a “really difficult” choice for the conference.

And timing could be everything: Thune is subject to the same six-year term limits as whip that rotated Cornyn out of the spot. Barrasso has spent several years using his messaging operation to ingratiate himself with more junior Republicans, lining up lengthy press conferences and helping ease his path to become the next whip — the same perch that’s helped Cornyn and Thune position themselves to succeed McConnell.

If Trump mounts another run for president, the shine of being Senate GOP leader might dull a bit. But in the immediate term, Trump has laid off Thune even after the senator announced his reelection run. Instead, the former president this week went after Sen. Mike Rounds (R-S.D.) for saying the 2020 elections were fairly won, which some Republicans said Tuesday was helpful to Thune.

“John’s a cautious man. Hes a deliberate person. He’s not impulsive from anyway that I can tell, except on a basketball court,” Cramer said of his fellow Dakotan. “John probably has a pretty good sense of his likelihood of success.”

Yet if there’s a favorite McConnell heir, no one is saying. Thune and Cornyn aren’t asking for anyone’s support, and both say they they’ll support McConnell as long as the Kentuckian is in office. Some senators think McConnell’s set to stay around as leader until the end of his Senate career, regardless of Trump’s relentless attacks on him and calls for new leadership.

“I don’t see Mitch McConnell relinquishing his leadership post prior to some future decision not to run for reelection,” Collins said. She estimated a leadership campaign “wouldn’t happen for probably five years from now.”

Nonetheless, the unofficial battle of the Johns is very real. And as Cornyn put it: “I try to always be prepared.”