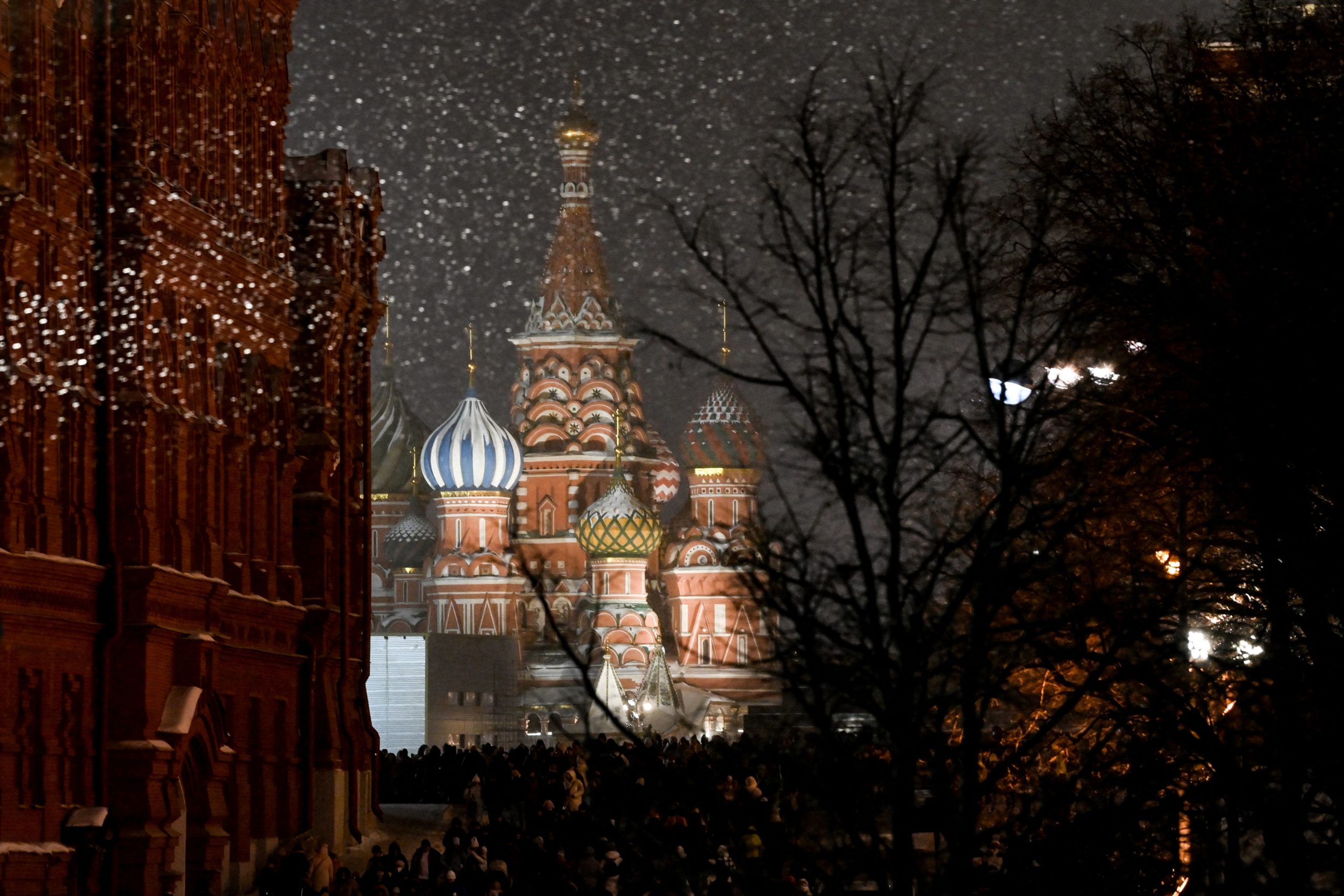 MOSCOW — In the center of Moscow, right under the Kremlin’s walls, Russians are still celebrating their long winter holidays. Red Square’s cobblestoned expanse has been transformed into a holiday festival overflowing with revelers.

There’s an ice rink and carnival rides. Lines for mulled wine and sugary doughnuts wind through the crowd. As small children spin in colorful teacups, nostalgic Soviet songs blare over the ride’s speakers, hinting at a sentimentalized past those youngsters will never get to experience.

Thousands of miles away, Russian officials are sitting down for tense, high-profile talks with the U.S. and its NATO allies this week, as Moscow demands security guarantees and the West challenges Russia on its military buildup near the Ukrainian border. But here in Red Square, the prospect of war seems distant and unlikely.

“Drink your milkshakes and hug each other. Hug each other, I said!” Kristina Kostova, 38, a mother of two, yells while trying to take an Instagram-worthy photo of her 8-year old son and 6-year old daughter, who had already lost the lid to her milkshake.

“What normal person wants a war?” Kostova responded when I asked about her thoughts on Ukraine. “We love Ukrainians. As for our political differences, maybe they will affect us, but we don’t want any part in this conflict,” she said.

“There won’t be a war,” her husband, Mikhail, added, and then struck a typically Russian note of fatalism: “And if there is, then it’s out of our hands anyway.”

I went to Red Square on the last weekend of the New Year holiday to try to gauge how prepared ordinary Russians might be for yet another conflict in Ukraine. For months, Russian President Vladimir Putin has been massing troops and Russian state television has been laying the groundwork for war. State-sponsored political talk shows warn that Ukraine is growing more nationalistic, spurred on by the West and Russo-phobia among some Ukrainians.

Russian television has broadcast footage of Ukrainians tearing down Soviet statues. It’s part of a new wave of statue-toplings in Ukraine; last summer, residents of the western Ukrainian city of Lviv dismantled a monument celebrating the Soviet Army’s defeat of Nazi Germany, a victory considered sacred in Russia. “Everything that is somehow connected with the Soviet period in Russia is subject to either public desecration or destruction in Ukraine,” TV hosts said in one broadcast.

Then on the eve of Russia’s longest holiday of the year – New Year’s, which combined with Orthodox Christmas makes a nearly two-week long break at the start of January – Putin issued a set of demands that the West has interpreted as an ultimatum.

If Putin follows through on his threats, it would be the third major deployment of Russian soldiers in Ukraine (although the deployments weren’t always acknowledged by the Kremlin). The first was in February 2014, when Putin sent troops to occupy Crimea, a scenic peninsula that most Russians know for its warm, rocky beaches and summer camps. The second big outbreak of hostilities came later that year when ethnic Russian separatists in the coal-mining region of Donbas seized control and proclaimed independent republics in the Donetsk and Luhansk regions. Russian-backed rebels with the support of Russia forced out Ukrainian troops.

The Crimean annexation saw Putin’s approval ratings surge above 80 percent. But it hasn’t yet been clear whether or to what extent ordinary Russians support Putin’s current actions in and around Ukraine; tens of thousands of Russian combat troops have massed in three areas on the Ukraine-Russia border.

According to a poll by the independent Levada Center published last month, almost 40 percent of Russians see war as either probable or certain. Almost the same number, 38 percent, consider a war between the two countries unlikely, and another 15 percent completely rule out the possibility. That means, in effect, that a majority of Russians are psychologically unprepared for war.

Which is one reason escalation of the conflict with Ukraine could be a tough sell for many Russians.

“In an urbanized and modernized society, there are not that many families who are willing to send their boys to a real war,” Andrei Kolesnikov, a senior fellow at the Carnegie Moscow Center think tank, told me.

Crimea has always occupied a special place in the Russian imagination dating back to 1783 when the peninsula which juts into the Black Sea was first annexed by the Russian Empire. In her childhood, Kostova, like many of her generation, spent her summers in holiday camps on the Crimean coastline, a popular vacation spot that has enjoyed a renaissance since 2014.

“But, now you can’t even go there, everything is overbooked,” she said.

In Red Square, I strike up a conversation with an 84-year-old grandmother who gives me her first name and patronymic, Galina Nikolaevna, according to Russian custom. She has made a rare outing with her granddaughter and her granddaughter’s husband to enjoy some hot dogs and warm tea underneath the Christmas lights surrounded by Kremlin’s red walls.

Galina Nikolaevna, who spent most of her life in the Soviet Union, rarely ventures further than her courtyard anymore and mostly stays home and watches television. But when I ask her what she thinks about Crimea, she fondly recalls going to the peninsula on multiple summer holidays when she was younger.

“When Crimea was reunited with Russia, I was happy,” she told me. But she says she was sobered by the costs of the conflict: “Then I realized that people suffered because of what happened. People are not to blame…”

Her 30-year-old granddaughter, Anna, interrupts. “I disagree, grandma. People are to blame because my parents who lived through the Soviet Union collapse always told me to never express my political opinions publicly because it is not going to change anything. But I think that’s why we have what we have now,” Anna said.

Anna told me she does not know how she feels about the annexation of Crimea because she is not sure what to believe about a referendum that Russian leaders held and claimed showed that residents supported Russia annexation.

“I believe in duality. There are two sides to every story, especially in politics. So, who can say what really happened?” she said.

Anna’s husband, Maksim, 28, told me he was born in Crimea to a Russian mother and a Greek father. However, his family left the peninsula when he was 6 years old. He and his wife, Anna, whose father is also Ukrainian, now live in Moscow.

Maksim says that men of his generation and younger have grown soft and are not interested in fighting, despite the mandatory military service that most Russian men over 18-years-old have to undergo.

“If I get drafted right now, I will probably get killed in the first wave of attacks and then who will they send? TikTokers?” Maksim said with a dismissive smirk.

In 1954, Soviet leader Nikita Khrushchev transferred the Crimean peninsula from one Soviet jurisdiction to another — from the Russian Soviet Socialist Republic to the Ukrainian Soviet Socialist Republic. Since they were both Soviet republics, the transfer seemed innocuous. But after the collapse of the U.S.S.R., many Russians were saddened that Crimea was now part of another country; they had grown used to thinking of Crimea as an inseparable part of Russia, one of the few warm spots in an otherwise wintry landmass.

So when Putin occupied and annexed Crimea, most acquiesced.

The Kremlin denies breaking international law by annexing Crimea and points to the 2014 referendum that Russian leaders said showed overwhelming Crimean support for joining Russia; results have been widely disputed in the West.

“Crimea returned to its historical homeland. Whether or not that was appropriate, that’s not for us to decide,” Kostova said.

The West does not recognize the annexation of Crimea and has accused Russia of violating international law and Russian-signed agreements safeguarding the territorial integrity of Ukraine. In the aftermath of the annexation, Russia lost its seat at the G8 as the West imposed far-reaching sanctions.

“Crimea was taken without firing a single shot. It was not a war, but a triumphant, peaceful and easy restoration of justice for the majority of Russians,” Kolesnikov said.

By contrast, the Donbas — a post-industrial region dependent on ailing Soviet-era coal mines — does not hold a special place in the Russian mind. And years of war have made attitudes to Donbas, and Ukraine more broadly, rather less romantic. Domestically, the Russian population is growing tired of years of ebbing and flowing clashes on the Ukraine-Russia border.

To get some insight into this difference, I reached out to Russia’s best pollster, Denis Volkov, president of the Levada Center.

According to Levada’s data, the majority of Russians don’t want to make Donbas a part of Russia, preferring independence for the Russian-speaking east of Ukraine. But they also generally support Putin’s line on their shared identity and heritage with Ukraine.

Whether young Russians would be willing to fight for Donbas independence or annexation is another question, however.

For years now, Putin has been reworking Russians’ understanding of their history, and one element of that is to deny that Ukrainians have their own history and culture that is independent of modern-day Russia. In his version, Ukraine is indistinguishable from Russia, and Ukrainian moves toward independence are fomented by the West in an attack on Russia.

This might help explain why Putin has been focusing this round of complaints on NATO. According to Volkov’s polling, half of Russians believe that the United States and other NATO countries are the instigators of heightened tensions in eastern Ukraine, while 16 percent blame Ukraine and only 4 percent blame Russia.

In other words, the one thing that might bring Russians around to this potential war is if they believe that NATO, not Russia, is the aggressor.

“The logic is that if NATO is pulling us into a war, then we must respond in kind, in order to protect the Russian-speaking population in the Donetsk and Luhansk People’s Republics,” said Volkov, referring to the unrecognized east Ukrainian statelets proclaimed by pro-Russian separatists.

So far, Volkov says, Russians mostly do blame NATO and the U.S. for the conflict with their former Soviet compatriots. But Volkov says it remains to be seen if they will unite behind Putin over Donbas the way they did for Crimea.

“It seems to me that there will be no such rally around the flag as happened after Crimea,” Volkov said. “People are tired of the Ukraine conflict, and tired of international tensions.”