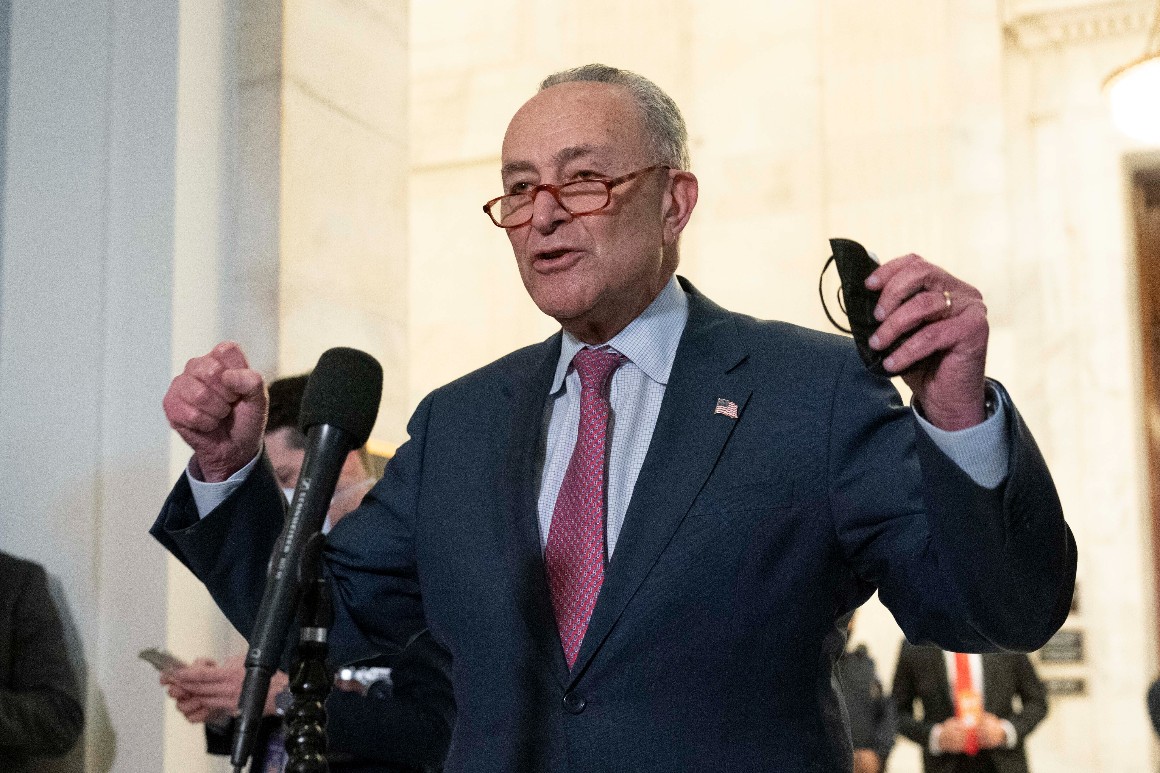 Senate Democrats are careening toward a final showdown on voting rights, with Majority Leader Chuck Schumer putting forth a bill that would make major changes to American elections — and putting pressure on members to change the Senate’s filibuster rules in order to pass them.

Democrats have effectively combined parts of other proposals in recent years into one megabill on voting rights. The new bill — titled “Freedom to Vote: John R. Lewis Act” combines the Freedom to Vote Act and the John R. Lewis Voting Rights Advancement Act into one 735-page behemoth.

If the package became law, it would represent a dramatic overhaul of nearly all aspects of the American electoral system, affecting everything from how votes are cast to how they are tallied across the country. And it would sweep well beyond that, remaking campaign finance laws and likely triggering a significant redraw of the nation’s House districts.

But while the House passed the bill on a party-line vote Thursday, it faces a blockage in the 50-50 Senate: the filibuster rule. Sens. Joe Manchin (D-W.Va.) and Krysten Sinema (D-Ariz.) remain opposed to changing the chamber’s rules requiring 60 votes to move forward with most legislation, and the bill has not garnered Republican support.

“While I continue to support these bills, I will not support separate actions that worsen the underlying disease of division infecting our country,” Sinema said in a floor speech on Thursday.

Here are some of the most consequential provisions in the legislation — and what was left out.

The new combined legislation largely draws on the Freedom to Vote Act to expand ballot access in several ways. The provisions include requiring states to offer online and Election Day voter registration, as well as offering automatic voter registration when an eligible would-be voter interacts with a state’s motor vehicle department.

The bill would also set minimum requirements for offering early in-person voting — all states would have to have an early-voting window starting at least 15 days before the election — and making mail absentee voting available to all voters.

Currently, 44 states and Washington, D.C. offer at least some level of in-person early voting, according to the National Conference of State Legislatures. Thirty-four states and D.C. offer no-excuse mail balloting, per the NCSL.

The package does not mandate universal vote-by-mail systems, in which states automatically mail ballots to voters without a request. Eight states currently conduct at least some elections this way, with limited in-person options typically offered as well.

Broadening what can be used as voter ID

The bill would also weaken state voter ID requirements. Some states have what are known as strict photo ID laws, which requires voters to present a narrow set of documents — like a driver’s license or state ID card — to prove their identity.

The bill requires that states with identification requirements accept a significantly wider range of documents, including debit cards, utility bills or bank statements issued within six months of the election or “any other document” with an individual’s name issued by federal, state, tribal or local governments. The bill would also let would-be voters present, in lieu of ID, a “sworn written statement” signed by another adult who has known the voter for at least six months “under penalty of perjury.”

Thirty-five states require at least some level of voter ID, per the NCSL, varying from strict photo ID laws to more permissible laws similar to the language in the bill. The legislation would not require states to adopt an ID requirement if they don’t already have one.

It would also restore voting rights to former felons who have been released from prison. Twenty-three states automatically restore the right to vote after release from incarceration or never strip it to begin with, according to the NCSL.

The bill also prohibits restrictions on giving food and water to voters waiting in a line, as long as the food is “distributed without regard to the electoral participation or political preferences of the recipients,” and it allows states to restrict distributors from undertaking “political or electioneering activity.” A provision disallowing this practice was one of the most publicized components of the election law Georgia passed last year, which added new restrictions. The megabill also includes the Right to Vote Act, which some legal scholars believe would open up expansive opportunities to sue over voting practices that are not specifically enumerated.

“Every citizen of legal voting age shall have the right to vote and have one’s vote counted in elections for Federal office free from any burden on the time, place, or manner of voting,” the bill reads. It disallows “retrogression,” which would be “diminish[ing] the ability to vote or to have one’s vote counted … [unless] the law, rule, standard, practice, procedure, or other governmental action causing the diminishment is the least restrictive means of significantly furthering an important, particularized government interest.”

The bill would also make Election Day a federal holiday for both midterm and presidential years.

Restoring a key provision of the Voting Rights Act

The mega-package also pulls from the John Lewis Voting Rights Advancement Act, a bill that would restore a key provision of the landmark 1965 Voting Rights Act. The Voting Rights Act set up a concept called “preclearance,” which meant states and other jurisdictions with history of discriminatory voting practices had to get election law changes — including new political boundaries — preapproved by either the Department of Justice or the federal district court in D.C.

A 2013 Supreme Court ruling, Shelby County v. Holder, effectively gutted preclearance by striking down the formula Congress was using to determine which jurisdictions had discriminatory history. The bill proposes a new equation to make that calculation that would re-trigger preclearance requirements.

The bill also includes the Native American Voting Rights Act, establishing particular rights for tribal communities that would likely result in more polling places and drop boxes on tribal land, among other changes.

One of the biggest provisions in the bill would be a significant overhaul of the congressional redistricting process — namely banning partisan gerrymandering. In a 2019 Supreme Court decision, Rucho v. Common Cause, the high court ruled that federal courts had no power to police congressional lines that were drawn to give a party a partisan advantage. This bill would write that power into law.

“A State may not use a redistricting plan to conduct an election if the plan’s congressional districts, when considered cumulatively on a statewide basis, have been drawn with the intent or have the effect of materially favoring or disfavoring any political party,” the bill reads, laying out tests for how courts would ultimate decide if that has been violated or not. Mapmakers are also barred from considering the residences of members of Congress or candidates when drawing the lines.

The bill would give the Department of Justice, private citizens and political parties, among others, the ability to bring lawsuits challenging congressional maps.

Undercutting some attempts to subvert elections

The bill also has sections that address attempts to subvert a federal election, mainly targeting attacks on elections administrators and the tallying of votes. One provision makes it harder to remove local election officials, giving a removed official the right to sue and the federal government the explicit ability to intervene in lawsuits to try to stop the removal.

The bill adds a so-called “buffer rule” that requires poll watchers to not come within 8 feet of voters or ballots at polling locations, and it extends that buffer to ballots “at any time during which the processing, scanning, tabulating, canvassing, or certifying voting results is occurring.”

And the package also calls on state election officials to lay out a long list of rules on how election audits should be conducted, rather than the ad-hoc election reviews that Republicans initiated in a number of states after the 2020 election.

The voting provisions have gotten the most attention in this bill, but the legislation also proposes dramatic changes to federal campaign finance laws in the United States. It includes the DISCLOSE Act, which would force a slew of politically active nonprofit organizations — which can keep their donors secret under current law — to publicly disclose their funders. It would also apply disclosure requirements to groups that spend supporting or opposing federal judicial nominations, and it lays out firmer bans on foreign campaign contributions.

A separate section of the mega-bill, called the “Honest Ads Act,” would extend requirements for “stand by your ad” provisions — example: “I’m Zach Montellaro, and I approve this message” — to apply to more digital advertising, and it would generally require online platforms to keep a database of political ads purchased on them.

The bill would also create various public financing programs for House elections. One is titled the “optional democracy credit program,” allowing states to opt into a program that would provide voters a “democracy credit” of about $25 which they can give to a candidate. The bill, separately, creates a 6-to-1 public matching program for small-dollar donors to House candidates. Republicans have opposed these provisions particularly vocally.

What’s not in the big bill

The Freedom to Vote Act is the successor to the For the People Act, an even more expansive package that Democrats abandoned after Manchin said last year he could not support it. Left on the cutting room floor then were proposals like requiring states to adopt independent redistricting commissions, new ethics policies for Supreme Court justices and a requirement that presidential and vice presidential candidates release their tax returns, among many others.

Some election scholars also say the bill does not address broader concerns about election subversion in the wake of the 2020 vote. This package does not include reforms to the Electoral Count Act, the byzantine law that dictates how Electoral College votes are counted and how election objections are handled.