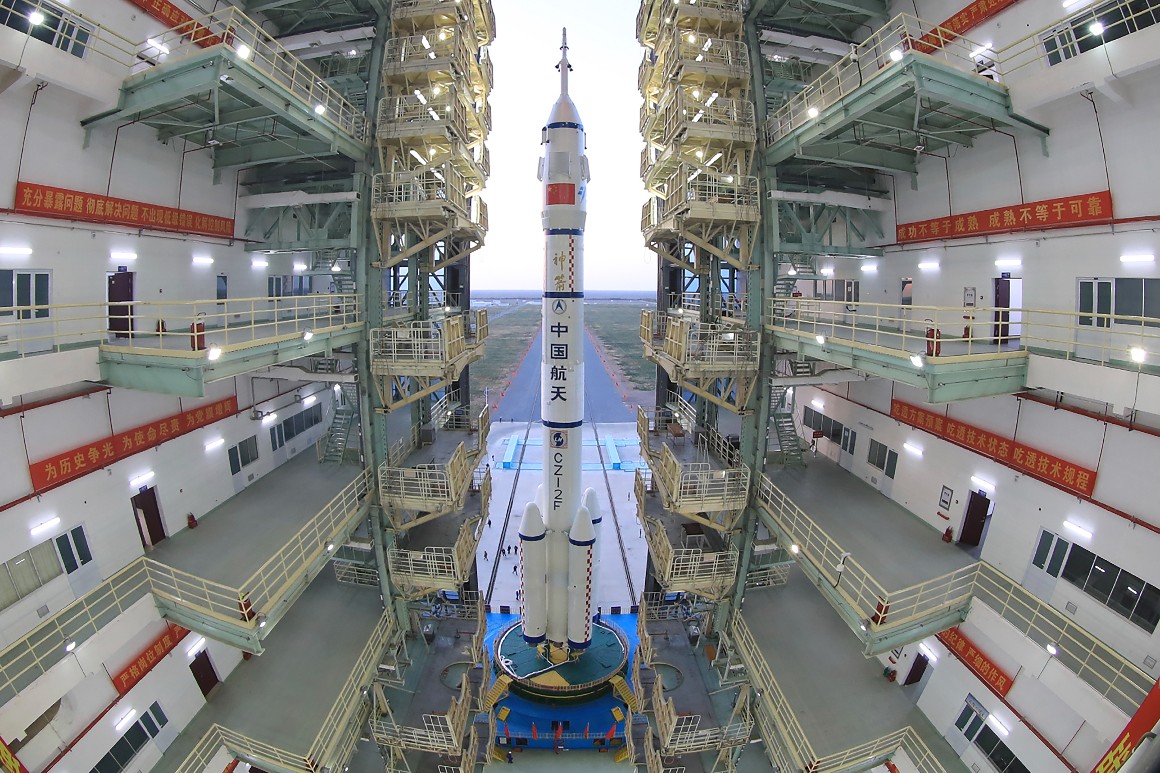 The new year could be a turning point in what’s steadily defining the next chapter in the space age: The fierce competition between the United States and China for economic and military dominance.

Washington, D.C., and Beijing are jockeying for advantage — and international partners — to develop the moon and are locked in what increasingly looks like an arms race that could threaten the growth of satellite constellations and space stations. And so far, international efforts to reduce tensions and encourage sustainable growth in low-Earth orbit and beyond have made little progress.

“We are in a race that we might win but it is certainly conceivable that China may advance in certain areas of space faster than we do,” said Sen. Jerry Moran of Kansas, the top Republican on the Commerce Subcommittee on Space and Science. “It is to our advantage to do everything to see that for at least the things we determine to be significantly important, we achieve as quickly as possible and hopefully before our adversaries do.”

“I trust how we will use space to be advantageous to not only the United States but the world,” he added in an interview. “But I don’t trust others to do that.”

China is showing no sign of slowing its pace to surpass the U.S. and other powers in space transportation and exploration, say current and former officials and space industry experts. “It’s becoming more and more clear how dominant China wants to be with regard to space and the space economy,” said Steve Kwast, a retired Air Force lieutenant general and space strategist. “They see the profit margin, they see the economic revenue stream and they see the national security implications.”

The competition will play out in myriad ways in 2022 that could ultimately determine which country seizes the upper hand.

Who will be the traffic cop?

A big question is who will lead the global space industry in managing the historic growth in satellites that are increasingly at risk of colliding with orbital debris — or each other — if not better coordinated.

“It becomes harder and harder to corral and the importance continues to grow, and grow quickly,” said Dan Dumbacher, president of the American Institute of Aeronautics and Astronautics. “The U.S. is a leader in that arena and we want to stay in front of that conversation to make sure it’s going in a good direction.”

But before taking on a greater role globally, Washington needs to finally iron out what U.S. agency is in charge, whether the Commerce Department or the Federal Aviation Administration, which licenses space launches.

That is among the agenda items facing Vice President Kamala Harris, who chairs the National Space Council, which held its first meeting earlier this month.

“I haven’t seen much of any desire on the part of this administration to take the significant steps necessary to first of all decide what agency is going to be in charge of this … and then fund it properly,” said Robert Walker, former GOP chair of the House Science Committee.

But the stakes are high. “We’re falling behind,” said Walker, who is now head of moonWalker Associates, a space consulting firm. “The danger is someone like China will come up with their system for that and the world will rally around that.” The recent Russian test of an anti-satellite weapon was a stark reminder of the consequences of an unregulated low-Earth orbit.

“That is an issue that is going to get worse and worse,” predicted Rand Simberg, a space policy analyst. “We can’t keep deliberately blowing things up. That Russian test made a hell of a mess.”

Walker also predicts “continuing challenges from China and probably even an increase in China and Russia’s attacks on our space infrastructure,” including electronic attacks on satellites.

He sees as an ominous sign China’s baseless complaint to the U.N. this month that SpaceX’s mega constellation of Starlink communications satellites is designed to threaten China’s nearby space station.

“What I think that means is they have every intention of going after some of our space assets, both commercial and military,” Walker said. “We need to fund the research we are doing into advanced weaponry in order to stave off that challenge.”

China’s test this year of a hypersonic missile that orbited the Earth was also widely seen as a demonstration of its growing technological prowess to hold American space assets hostage.

“The Space Force is looking like a better and better idea with each passing day and the need to have somebody up there who is guaranteeing freedom of operation … as well as keep the lanes of commerce clear, if you will,” said Paul Stimers, a space lobbyist with K&L Gates.

Many of the technological breakthroughs being pursued on both sides are geared toward putting down stakes on the moon to pave the way for a long-term presence that could support commercial ventures.

China has been operating the first robotic spacecraft on the far side of the moon and is also working on its own lander for human missions to the lunar surface.

The timeline for NASA’s Artemis program to return astronauts to the lunar surface has already been delayed at least a year, until 2025. A linchpin of the NASA moon effort is the Space Launch System, the Boeing-built mega-rocket that has been beset by years of delay and cost overruns that is finally set to make its maiden test flight in 2022.

“Whether or not we do a successful SLS flight … will demand attention,” Walker said.

He added that challenges with engines and other components make it an open question “whether or not we even have the infrastructure in place that we can do the second and third flights. I see those as issues that bubble to the top in 2022.”

A lot will also be riding on SpaceX’s Starship rocket, which is in line to be the first commercial rocket that can travel to the moon and beyond. It is slated to make its first orbital test flight in early 2022.

The U.S. moon program has been enlisting international partners in the form of the Artemis Accords, which now includes more than a dozen countries. But Russia and China, which are pursuing a lunar research station, are also seeking partners.

Stimers says whether space will become increasingly democratized depends heavily on who charts the way.

“I think that’s where the Artemis Accords have come into play,” he said. “As we work with our various international partners to develop a set of norms and expectations of behavior, both on the moon and beyond, we’re trying to set up a regime … that focuses on equity and openness.”

“Internationally, people have a very clear choice to make,” he added. “They can judge whether [the Artemis Accords] are a square deal or one that advantages the United States more than the other participants. And they can also look at what China does and has done and whether that turns out to be a square deal or not. I absolutely expect that will be one of the big stories in 2022.”

But 2022 could determine whether progress is possible on what many see as the next best thing: Agreed-upon “norms of behavior” between leading space powers that reduce the chances of conflict in orbit and help ensure space is sustainable in the years ahead.

New focus is on a nascent diplomatic process underway at the United Nations. On Christmas Eve, the General Assembly adopted a resolution on “Reducing Space Threats through Norms, Rules and Principles of Responsible Behaviour.”

“They are going to be meeting four times — twice this spring and then twice in 2023 — with the idea that they are going to come to some sort of consensus-driven document about norms of behavior,” said Victoria Samson, director of the Washington office of the Secure World Foundation and a specialist in space security. The fact that the process is geared toward behavior and not technology — such as trying to ban certain classes of weapons, which has long been considered a nonstarter — is a sign that there may be some overlapping interests, according to Samson.

“I think it’s really encouraging because it does indicate there is an interest in moving ahead and dealing with space security threats,” she said.

Moran, who is also a member of the defense appropriations panel, says he’s hopeful the diplomatic process can make inroads in 2022.

“It is one of the reasons we need to fare well in space quickly because the incentive to reach those agreements increase,” he said. “If our technologies are superior — or at least not less than China’s, Russia’s or anybody else’s — there’s more of an incentive for those countries to try to reach those norms.”

Zhanna Malekos Smith, a space researcher at the Center for Strategic and International Studies and professor at the U.S. Military Academy at West Point, warns the hurdles are high.

She pointed out that there are several “multilateral mechanisms” already in place to regulate behavior in orbit, including the Space Debris Mitigation Guidelines developed by the United Nations Committee on the Peaceful Uses of Outer Space.

“Despite these collective best efforts, however, states are still conducting destructive anti-satellite weapons tests,” she said.