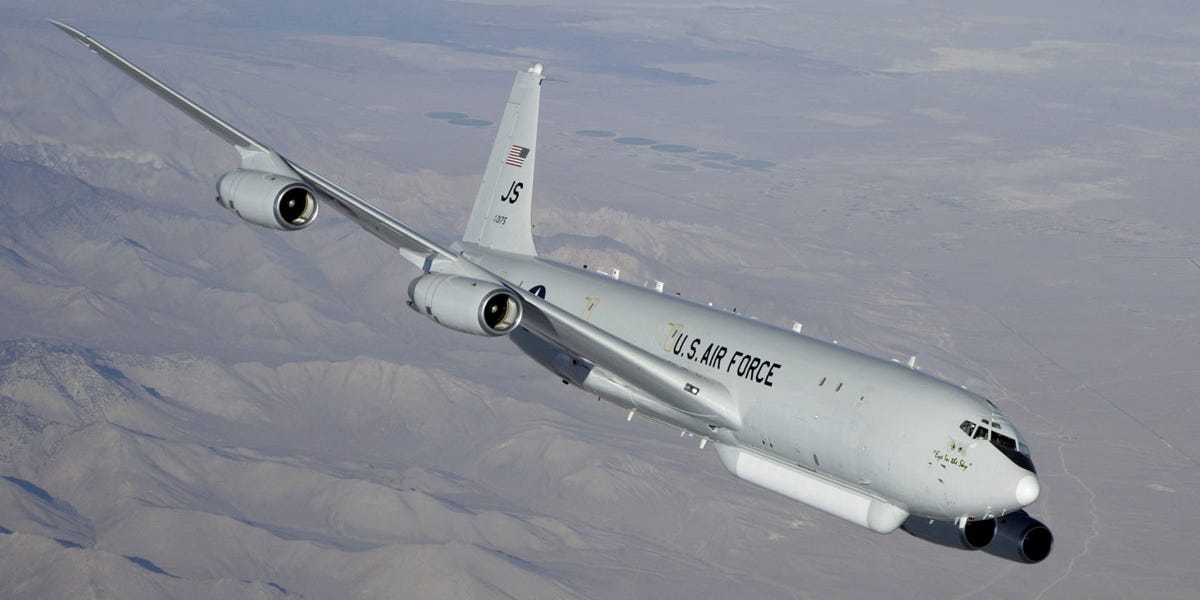 The US sent a surveillance jet flying over Ukraine this week as Russia continues to maintain a large force near the Ukrainian border, perpetuating fears Russia may move to take military action against its neighbor.

In a first for the US military, the US Air Force flew an E-8C Joint Surveillance Target Attack Radar System (JSTARS) aircraft designed to gather ground intelligence over the eastern part of the country on Monday, a US European Command official told CNN Wednesday.

The aircraft’s flight path is unclear, as are the details of the intelligence gathered during the flight, which was carried out with Ukraine’s permission. EUCOM spokesperson Lt. Cmdr. Russ Wolfkiel told CNN only that US flights in that part of the world support “various US and coalition intelligence objectives.”

The Air Force’s E-8C JSTARS planes are military versions of the Boeing 707-300 commercial aircraft that have been modified to provide airborne battle management, command and control, and intelligence, reconnaissance, and surveillance capabilities.

The plane’s long, side-looking phased array antenna in the radome offers a 120-degree field of view and can gather information on ground forces across roughly 20,000 square miles, according to the Air Force. It is possible, albeit uncertain, the aircraft was collecting intel on Russian forces near the Ukrainian border.

Russia announced over the weekend that it was withdrawing around 10,000 troops from the area following the conclusion of military exercises. Russia is believed to still have a significant military presence near Ukraine though.

In early December, The Washington Post reported that the alarming Russian military buildup near Ukraine was somewhere between 70,000, according to US estimates, and 94,000, according to Ukrainian assessments. The Ukrainian Ministry of Defense later told Military Times there were as many as 120,000 Russian troops in the area.

Satellite imagery taken over the last two months, including as recently as last week, show a number of Russian tactical battle groups, as well as military vehicles and equipment at locations near Ukraine.

Russia has repeatedly denied having plans to take aggressive military action against Ukraine, but these denials have done little to alleviate concerns.

Earlier this month, a Biden administration official shared intelligence with multiple news outlets, explaining that “the Russian plans call for a military offensive against Ukraine as soon as early 2022” and may “involve extensive movement of 100 battalion tactical groups with an estimated 175,000 personnel, along with armor, artillery and equipment.”

Amid fears Russia might decide to invade Ukraine, the US has repeatedly warned of consequences, which would include serious economic and financial penalties for Russia.

It was reported this week that Secretary of Defense Lloyd Austin has ordered the US Navy’s Harry S. Truman Carrier Strike Group to remain in the Mediterranean rather than relocate to the Middle East in order to reassure US allies and partners in Europe.

The warships are expected to remain in the area throughout planned talks between the US and Russia and between NATO and Russia, CNN reported.

Additionally, President Joe Biden signed the annual defense spending bill on Monday, approving $300 million in military aid to Ukraine, and Wednesday, it was announced that Biden will have another phone call with Russian President Vladimir Putin on Thursday to “discuss a range of topics.”

“I think both leaders believe that there is genuine value in direct leader-to-leader engagement, that we are at a moment of crisis and have been for several weeks now given the Russian buildup, and that it will take a high level of engagement to address this and to try to find a path to de-escalation,” an administration official told a group of reporters, according to NPR.