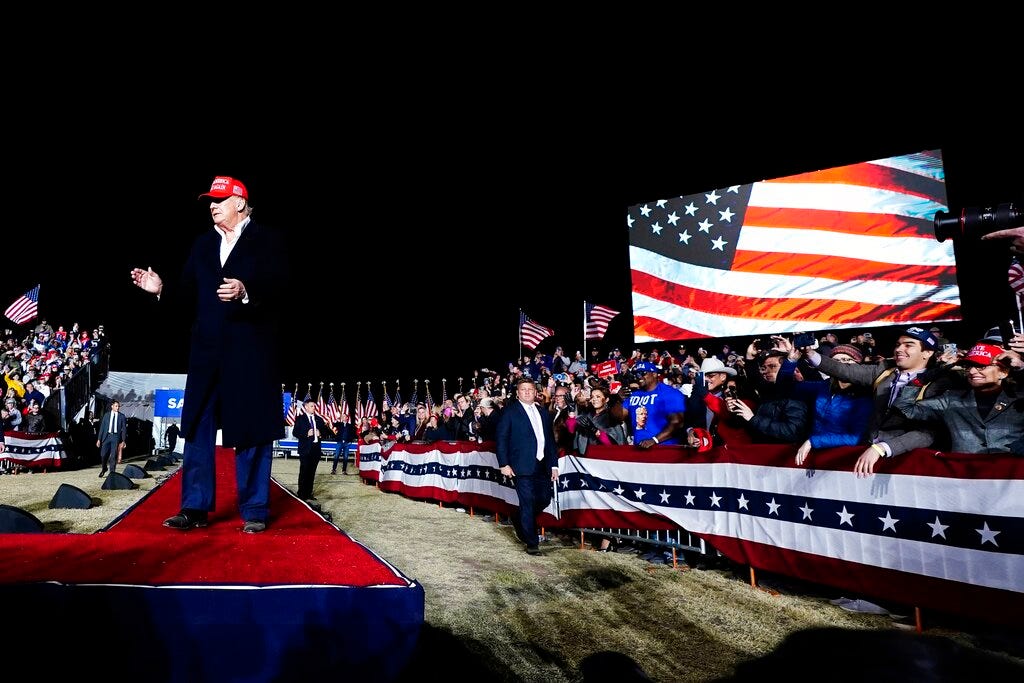 Former President Donald Trump reacts to the crowd prior to speaking at a “Save America” rally in Florence, Ariz., on January 15, 2022.

Former President Donald Trump on Saturday bragged about the crowd size of an Arizona rally and pointed to heavy traffic leading into the event venue as evidence that he — and not President Joe Biden — won the 2020 election.

Nearly a year after Trump departed the White House after losing his reelection bid to Biden, the former president continues to maintain that the election was fraudulent despite there being no evidence of mass irregularities and after repeated court losses by his campaign legal team.

During his “Save America” rally in Florence — the first large-scale Trump-helmed public gathering of 2022 — the former commander-in-chief once again called the election “fake” before equating the breadth of his in-person rallies to the presidential election results.

“A person that comes here … and has crowds that go further than any eye can see … there’s nobody that can see the end of this crowd,” Trump told thousands of cheering supporters.

He continued: “And has cars that stretch out for 25 miles. That’s not somebody that lost an election, and now because of it, our country is being destroyed.”

While Trump sported his trademark “Make America Great Again” hat and spoke to roughly 15,000 supporters, per an Arizona Republic estimate, the former president went down a laundry list of grievances with the 2020 election and Biden’s presidency, especially as it pertained to the state of the economy and the US-Mexico border.

The Republic also reported that traffic for the Florence rally “was backed up for more than an hour,” with attendees waiting in lines that traversed from the front of the venue to a dirt parking lot.

Trump has long equated crowd sizes to electoral support and frequently blasted Biden’s scaled-down events during the presidential campaign, linking it to a lack of support for the then-Democratic nominee. Meanwhile, Biden — who had sought to adhere to social distancing during the coronavirus pandemic — generally stuck with hosting outdoor events like drive-in rallies.

Trump has teased a 2024 presidential run for almost a year, notably at the multiple rallies that he held in support of Republican candidates last year, and during the Saturday event.

During a Fox News interview last November, Trump said that a final decision was still up in the air.

“I am certainly thinking about it and we’ll see,” he told the outlet at the time. “I think a lot of people will be very happy, frankly, with the decision, and probably will announce that after the midterms.”

Arizona was one of the hardest-fought states of the 2020 presidential election — and the longtime conservative stronghold will be hotly contested again in 2024 as well.

Last year, Biden became the first Democratic presidential nominee since Bill Clinton in 1996 to win the state’s electoral votes, edging out Trump by 10,457 votes out of nearly 3.4 million ballots cast.