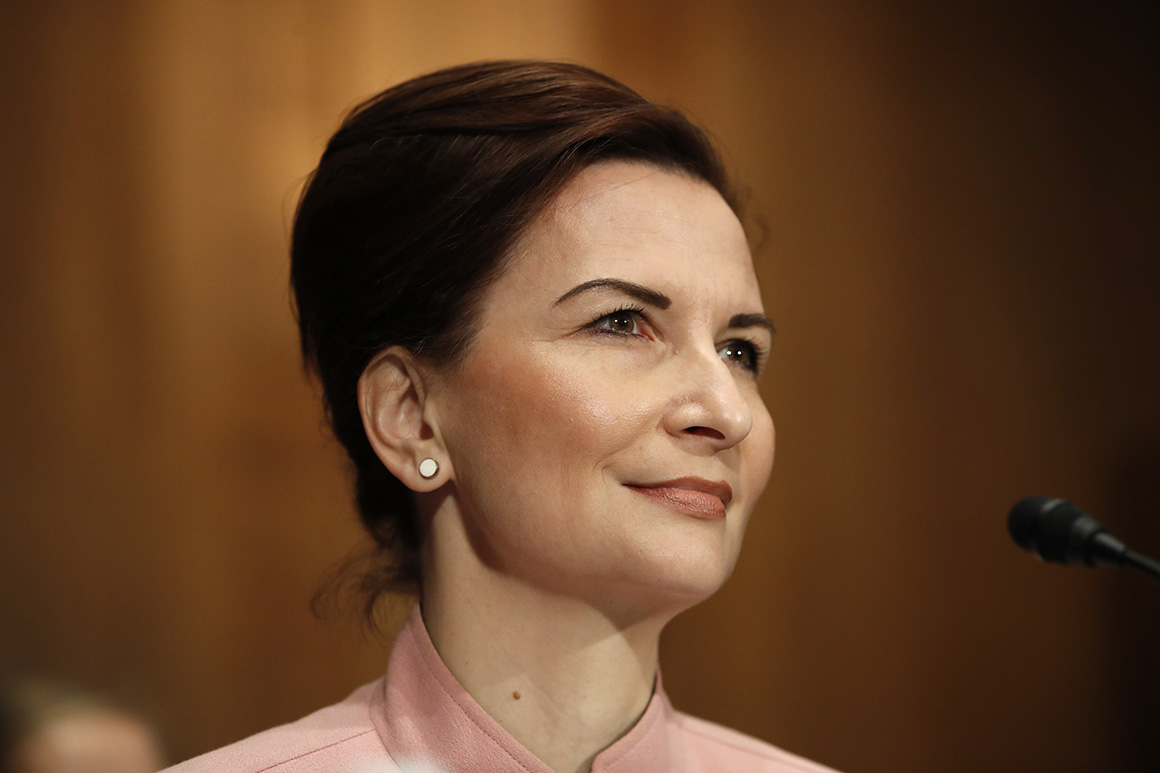 Federal Deposit Insurance Corp. Chairman Jelena McWilliams on Friday unexpectedly submitted her resignation after the Trump appointee faced partisan strife at the bank regulator, in a move that will give Democrats control of the agency in the coming weeks.

Her departure, effective Feb. 4, means that FDIC board member Martin Gruenberg will become acting chair — his third stint atop the 88-year-old independent agency that insures trillions of dollars in deposits at the nation’s banks. It followed an attempt by Gruenberg and other Democrats on the agency’s board to wrest control from McWilliams, whose term was not scheduled to end until June 2023.

Earlier this month, the Democratic majority on the FDIC’s board voted to take public feedback on potential changes to the agency’s bank merger approval process. McWilliams did not participate in the vote, and the FDIC in an official statement said the action was not valid. A legal debate ensued over whether a majority of the board can put items up for a vote without the consent of the chair, with Democrats maintaining they had clear authority.

At a Dec. 14 board meeting, McWilliams rejected a bid by Consumer Financial Protection Bureau Director Rohit Chopra — an FDIC board member and ally of Sen. Elizabeth Warren (D-Mass.) — to add a record of the vote to the FDIC’s official minutes.

Later, in an op-ed in the Wall Street Journal, McWilliams referred to the episode as a “hostile takeover.” But she made no mention of the saga in her resignation letter to President Joe Biden on Friday.

“When I immigrated to this country 30 years ago, I did so with a firm belief in the American system of government,” said McWilliams, who was born in former Yugoslavia, in her letter to Biden. “During my tenure at the Federal Reserve Board of Governors, the United States Senate and the FDIC, I have developed a deep appreciation for these venerable institutions and their traditions. It has been a tremendous honor to serve this nation, and I did not take a single day for granted.”

Her impending exit opens up another key position for Biden to fill, and it means none of the three federal banking agencies will have a Senate-confirmed official serving in their top regulatory job. The president is expected to soon tap a vice chair of supervision at the Federal Reserve, while his pick for comptroller of the currency recently withdrew after facing opposition from moderate Democrats.

For now, Gruenberg, who has been serving at the FDIC on an expired term for three years, gets to retake the gavel. The Obama-era chair of the agency took the unusual step of staying on as a board member after his leadership role ended and then dissented regularly against actions by McWilliams to loosen rules on banks of all sizes. McWilliams’ departure could lead to the reversal of some of those moves. Gruenberg first joined the FDIC’s board in 2005, after serving as an aide to former Sen. Paul Sarbanes (D-Md.). The FDIC in the coming months will have to grapple with how respond to the rise of financial technology startups and innovations that are rattling traditional banking. McWilliams has said the agency is considering whether some stablecoins, a type of cryptocurrency pegged to an underlying asset, should be covered by deposit insurance if they’re tied to the dollar.

Gruenberg is also expected to be more aggressive in pushing banks to prepare for risks posed by climate change, an area where the outgoing chairman has hesitantly engaged. McWilliams abstained from a vote at the Financial Stability Oversight Council, a Treasury Department-led panel of regulatory chiefs, on a report that called climate change an emerging risk to the financial system, saying the document’s conclusions warranted more research.

Some governance questions remain unresolved at the agency, such as whether future FDIC boards will be able to use a majority vote to overrule the chairman. House Financial Services Chair Maxine Waters (D-Calif.) has asked McWilliams to provide the legal basis behind senior officials‘ argument that only she could schedule a vote. The FDIC has not yet publicly presented its rationale.

Before becoming FDIC chairman in 2018, McWilliams spent years as a top aide to Sens. Mike Crapo (R-Idaho) and Richard Shelby (R-Ala.), including during Shelby’s chairmanship at the Banking Committee. Before being nominated to head the FDIC, she worked for a brief stint as the chief legal officer at Fifth Third Bank.

In a short interview Friday evening, JPMorgan Chase CEO Jamie Dimon described her as “a complete, capable, competent class act.” His bank, the largest in the U.S., is primarily regulated by other agencies but overseen by the FDIC because it has deposit insurance.

“I don’t think she pandered to big banks or little banks,” he said. “I think she tried to do her job, and she did it quite well,” he added, citing her work that made it easier for banks to hire workers with minor criminal records.

The clash between McWilliams and Democrats at the FDIC has further inflamed partisan tensions over the usually low-key agency. Sen. Pat Toomey (R-Pa.), an ally of McWilliams, blasted the White House for supporting the move by the FDIC Democrats to bypass the GOP chairman.

“I am deeply troubled to see the administration support this extremist destruction of institutional norms and unprecedented action to undermine the independence and integrity of our financial regulators,” Toomey said in a statement Friday. “President Biden should move swiftly to fill the two vacant board seats and Interim Director Gruenberg’s seat with qualified individuals who will respect the FDIC’s tradition of operating free from partisan political interference.”

Progressive activists celebrated McWilliams’ exit as a victory. The Open Markets Institute, an anti-monopoly group, said on Twitter Friday that “this welcome news means the FDIC board can get to work mitigating the risks of Too Big to Fail.”