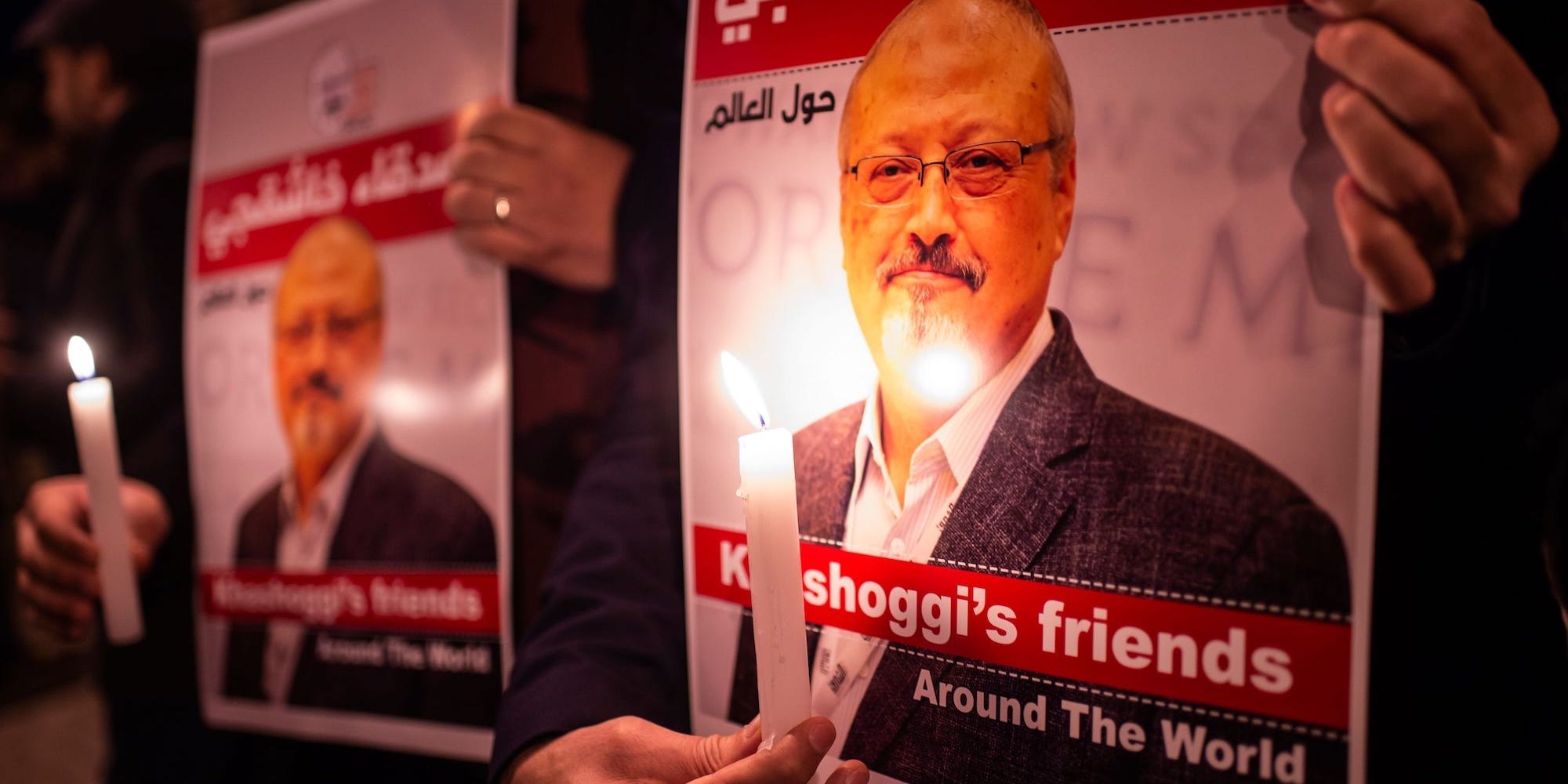 People hold posters picturing Saudi journalist Jamal Khashoggi and lightened candles during a gathering outside the Saudi Arabia consulate in Istanbul, on October 25, 2018.

Multiple members of the Saudi hit squad that brutally murdered journalist Jamal Khashoggi in October 2018 are living in luxury villas in a government-run Saudi security compound, according to the Guardian.

According to the report, at least three of the killers are residing and working in villas operated by the Saudi State Security Agency, in a compound in Riyadh. Family members are reportedly allowed to visit the men, and the “seven-star” housing units include gyms and offices.

The Guardian reported that Salah al-Tubaigy, the forensic expert who dismembered Khashoggi, was seen inside the compound. Mustafa al-Madani, the man who posed as Khashoggi’s body double, and Mansour Abahussein, the lead operative, were also spotted in sightings between 2019 and 2020.

Khashoggi, a prominent commentator and columnist for The Washington Post, was once within the Royal family’s circle, but their opinion of him soured once his work became critical of the family’s dealings.

Khashoggi was killed in the Saudi Consulate in Istanbul in October 2018 after he went to the consulate to pick up marital documents needed to marry his Turkish fiancée, Hatice Cengiz.

Turkish officials, along with UN and US officials, corroborated the allegations that Khashoggi’s body was dismembered with a bone saw. His remains have yet to be found.

In February, the Biden administration declassified a CIA intelligence report, which directly implicated the Saudi Crown Prince in Khashoggi’s murder.

“We assess that Saudi Arabia’s Crown Prince Muhammad bin Salman (MBS) approved an operation in Istanbul, Turkey, to capture or kill Saudi journalist Jamal Khashoggi,” said the report, provided by the Office of the Director of National Intelligence.

A UN report issued after Khashoggi’s killing seconded the claim, saying that “Assessments of the recordings by intelligence officers in Turkey and other countries suggest that Mr. Khashoggi could have been injected with a sedative and then suffocated using a plastic bag.”

A Turkish court is currently trying 26 Saudi nationals connected to the murder in absentia, with the next trial date set for July 8.

The Saudi government, after a series of excuses, admitted that Khashoggi was killed in a “rogue operation,” and placed 11 individuals on trial. Five people were sentenced to death in December 2019 by the Riyadh Criminal Court for “committing and directly participating in the murder of the victim” while three others were handed prison sentences.

The Guardian reported all of the men spotted in the complex were tried and sentenced as part of the trial, which was heavily criticized around the globe. Ahmad Asiri and Saud al-Qahtani, two high-ranking officials close to MBS, scraped by with no charges.

After the ruling, Cengiz said, “The ruling handed down today in Saudi Arabia again makes a complete mockery of justice.”

Khashoggi’s murder ignited a global pressure campaign against the Saudi regime, prompting officials in the US and abroad to briefly question their diplomatic relationships with Saudi Arabia.

After President Biden’s first meeting with MBS in early March, he reportedly refused to sanction the Saudi regime over Khashoggi’s killing.