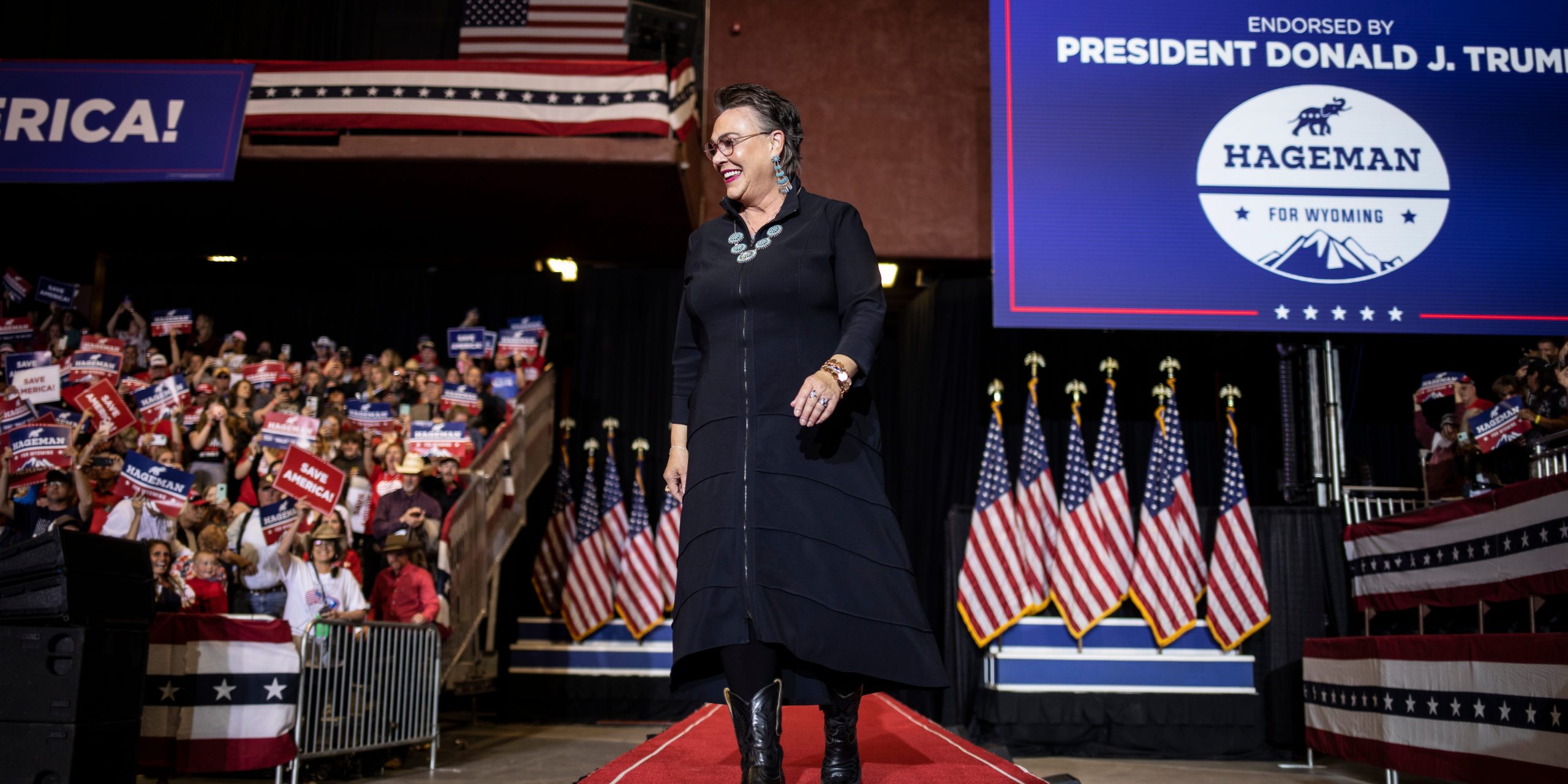 Harriet Hageman walks on stage to introduce former President Donald Trump at a rally on May 28, 2022 in Casper, Wyoming.

Harriet Hageman resisted calls from her rival, Rep. Liz Cheney, to admit the 2020 election was not stolen in their first Republican primary debate for Wyoming’s lone congressional seat. Instead, the Trump-backed challenger doubled down on her baseless election claims.

It’s a strategy that many Republican candidates endorsed by former President Donald Trump have taken in this year’s heated midterms: elevate false claims about the 2020 election in an effort to win and maintain his loyalty and beat the primary competition.

Trump has placed his faith in Hageman, a natural resources lawyer, former Republican National Committeewoman, and ex-Never Trumper, to defeat Cheney, a staunch conservative hailing from a political dynasty who’s become one of his fiercest Republican critics in Congress. Cheney voted to impeach Trump over his role in the Capitol riot on January 6, 2021, and serves as vice chair of the committee investigating the attack. The former president has championed Hageman as part of his revenge plot to purge the GOP of members he deems disloyal to him.

With Trump’s backing in a red state that overwhelmingly voted for him in 2020, Hageman presents the biggest threat to Cheney’s reelection. Hageman, formerly a Cheney ally, could oust her and become Wyoming’s next member of Congress after the August 16 primary.

“We didn’t elect her to Congress to wage her personal war with President Trump,” Hageman said in a statement to Insider. “The people of this state want their only member of Congress to reflect their views and values, and they’re going to fire Liz Cheney.” A fourth-generation Wyomingite, Hageman grew up on a small family ranch outside of Fort Laramie, located in the southeastern part of the state, roughly 100 miles from the capital, Cheyenne. The 59-year-old is the daughter of the late state Rep. Jim Hageman, a longtime Republican state lawmaker. She earned her bachelor’s in business administration and law degree from the University of Wyoming. At the start of her legal career, she clerked for James Barrett, a federal appeals court judge appointed by President Richard Nixon to the 10th Circuit, which covers Wyoming and five other Western states. Hageman went on to open her own firm in Cheyenne that specializes in natural resources law, working for years on issues related to public lands, water rights, and agriculture.

Her first foray into politics came four years ago when she ran for governor of Wyoming. She finished that Republican primary in third place, but the race raised her profile in the state. In 2020, she represented the state as its Republican National Committeewoman, resigning last fall shortly before she set her sights on Congress.

On the campaign trail, Hageman has frequently touted her Wyoming roots and cast Cheney as an outsider.

Cheney holds the same seat her father, former Vice President Dick Cheney, had for over a decade. She attended part of middle school in Wyoming before moving to northern Virginia after her father was first elected to Congress in 1978. Cheney relocated back to Wyoming in 2012, and since then, she’s had to fend off questions about her residency and defend her background. Hageman has weaponized Cheney’s years-long reputation as something of a carpetbagger.

“I know Wyoming. I love Wyoming. I am Wyoming,” Hageman told a crowd of Trump supporters at a May 28 campaign rally in Casper, the state’s second-largest city. “I am going to reclaim Wyoming’s lone congressional seat from that Virginian who currently holds it.”

Some voters have appreciated Hageman’s lines of attack and are convinced that she’s better positioned to deliver for the state.

“She’ll look out for the state of Wyoming a lot better than Liz Cheney,” said David Love, a 56-year-old voter who helps run a Facebook page titled “Primary Liz Cheney.”

Love runs a trucking company in Gillette, a city in northeastern Wyoming known for its fossil fuel production. He’s met with Hageman several times, even before she became a congressional candidate, and told Insider that he may vote for her in the upcoming primary.

“I like what she stands for,” Love said. “Pardon my French, she’s a no-BS deal. She’s pretty cut and dry about it. She isn’t gonna let ’em push her around and she’ll stand up.” Rep. Liz Cheney (R-WY) talks to reporters after House Republicans voted to remove her as conference chair on May 12, 2021.

In many ways, Hageman and Cheney are quite similar. Aside from their familial roots in Wyoming politics and legal backgrounds, the two support a conservative agenda.

Hageman’s critics have dismissed her attempts to discredit Cheney, claiming she’s only pursued that path because she cannot dispute the incumbent’s solidly conservative record. Cheney has proven her ties to the state and has been an effective legislator over her five years in office, her supporters told Insider.

Cheney voted with Trump 93% of the time during his four years in office. She believes in limited government, protecting Wyoming’s oil and gas producers and farmers and ranchers, promoting gun rights and rejecting abortion rights – policy positions that Hageman is also campaigning on.

The key difference between the two opponents lies in their approach to Trump. Cheney has said Trump poses a threat to American democracy following his push to overturn the 2020 election. Hageman has stood by Trump and mocked Cheney’s messaging as representing “radical Democrats” rather than her constituents.

“We’re not a democracy — we’re a republic,” Hageman said in last Thursday’s debate. “Our republic is not in danger because of President Donald J. Trump.”

Hageman’s pitch to voters is that she will fight to stop the Biden administration’s agenda. Cheney has decried President Joe Biden’s policies, but she’s largely framed her campaign as an existential battle over the Republican Party and whether it’s beholden to Trump or to the US Constitution and the rule of law.

Cheney, meanwhile, has received endorsements from the likes of non-MAGA Republicans, including former House Speaker Paul Ryan and former President George W. Bush, both of whom have fundraised on her behalf.

Hageman, with $1 million cash on hand, has trailed behind Cheney, who’s amassed a whopping $6.8 million war chest, in the money game. Yet Hageman has a considerable lead over Cheney in the race, according to two recent polls funded by pro-Hageman groups. Before the two Wyoming women came to represent today’s internal fissures within the Republican Party, they were friends. Hageman served as an advisor to Cheney’s brief and unsuccessful Senate campaign in 2014. When Cheney ran for Wyoming’s congressional district for the first time in 2016, Hageman endorsed her bid.

“I know that Liz Cheney is a proven, courageous, constitutional conservative — someone who has the education, the background and experience to fight effectively for Wyoming on a national stage,” Hageman said in an introductory speech at the state’s Republican Party convention that year.

Around the same time, Hageman had identified as a Never Trumper, a camp of Republicans who opposed his 2016 candidacy. She backed Sen. Ted Cruz of Texas in the GOP presidential primary and actively tried to stop Trump’s ascent, the New York Times reported.

Though in the years to come, Hageman turned into a Trump loyalist, an about-face that scores of Republicans took as the former president rose to power. And as Cheney escalated her attacks against Trump toward the end of his presidency, Hageman parted ways with the congresswoman. Throughout her campaign, Hageman has defended her position and expressed regret over her former alliance with Cheney.

“It basically highlights the hypocrisy of Harriet Hageman,” said Joe McGinley, state committeeman for the Natrona County Republican Party who plans to vote for Cheney.

“She was essentially a supporter of Cheney,” he added, “Then she gets this opportunity to run against her and get endorsed by President Trump and she jumps ship immediately.”

When Trump traveled to Casper for Hageman’s rally in May, dueling campaign billboards sat along the city’s highways. Hageman’s past disdain for Trump, calling him “racist and xenophobic,” was blasted on a Cheney-sponsored one. “Ditch Liz!” read another, paid for by a pro-Hageman super PAC.

Trump-backed GOP candidates have so far had mixed success, with some soaring to victory and others facing defeat. Wyoming’s Republican primary, less than six weeks away, largely represents a test of Trump’s lasting influence over the party and could provide a glimpse at its future. Some of his supporters in Wyoming are confident that his support will boost Hageman’s chances.

“She will excel,” Love said. “She’s a good candidate to become a great voice for the state of Wyoming.”