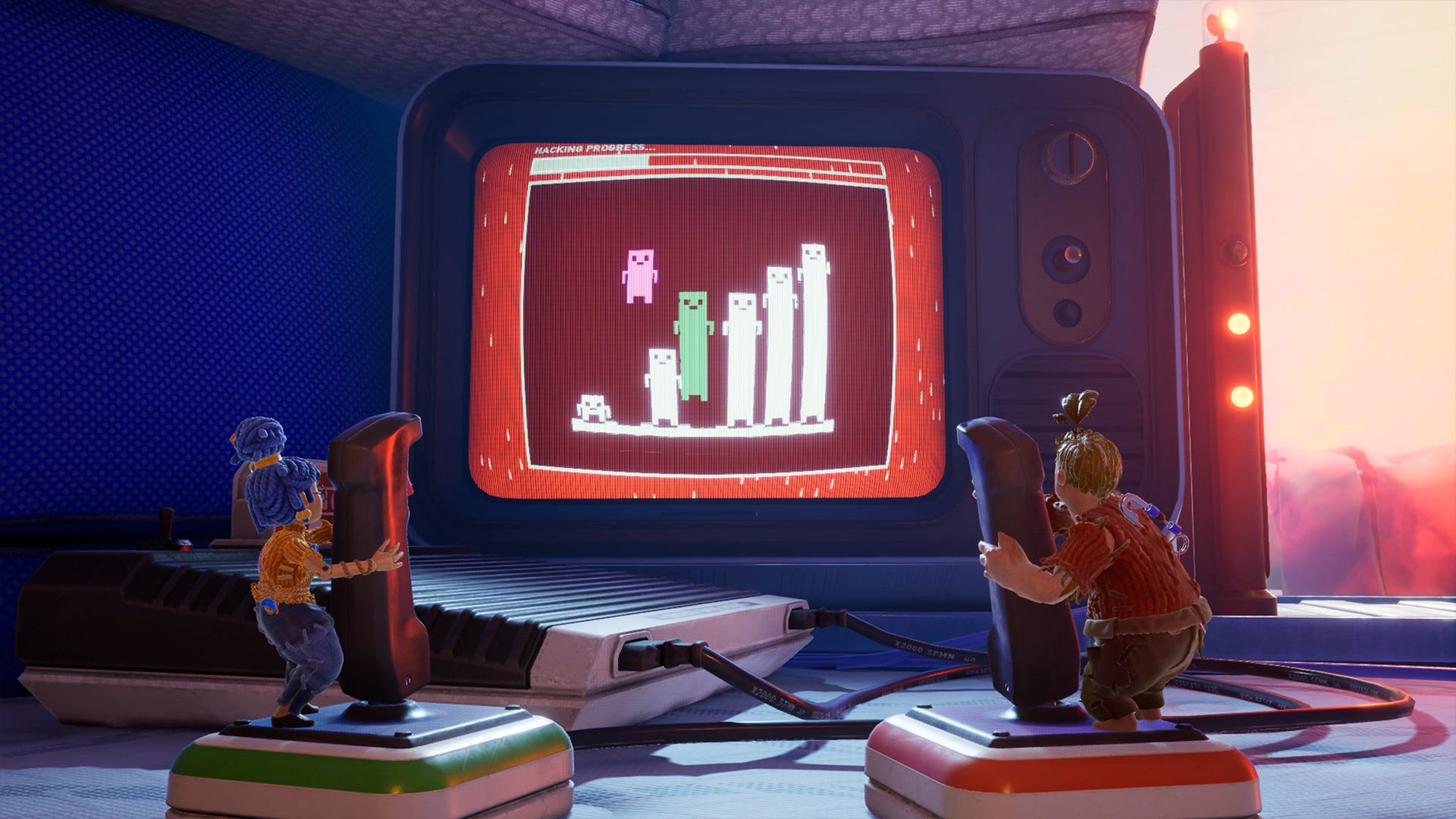 It Takes Two was awarded Game of the Year at The Game Awards 2021.

Despite rolling delays and setbacks for developers, 2021 still delivered some of the best games we’ve seen in years, whether it was successful sequels like Resident Evil Village and Forza Horizon 5, or debut titles like It Takes Two and Deathloop. Indie games like Valheim brought in millions of players while major studios made some of their biggest releases free to play, like Microsoft’s Halo Infinite.

With the PlayStation 5 and Xbox Series X consoles now a year old, we also saw games that made full use of their powerful hardware, like Microsoft Flight Simulator and Ratchet & Clank: Rift Apart. Nintendo had a relatively quiet year with multiple remasters released for the Switch, but Metroid Dread revived one of the company’s iconic franchises.

Below, we’ve selected the 11 best games released in 2021, with a quick breakdown of what made each one special. PlayStation and Xbox games are available cross-platform (e.g., PlayStation 4, PlayStation 5, Xbox One, and Xbox X/S) unless specified. It Takes Two is an awesome co-op adventure, but you’ll need to friend or family member to join in on the fun.

It Takes Two is a cooperative video game that takes a pair of players on a genre-bending adventure with a fully fleshed-out story. Players take control of Cody and May, a married couple approaching divorce; a wish from their daughter Rose leaves the parents trapped in the body of her dolls.

While most cooperative games stick to a specific type of gameplay, It Takes Two successfully blends elements from multiple genres, with May and Cody gaining unique abilities during each level.

It Takes Two requires two players to play, be it split-screen or online, and a single copy of the game comes with a free pass for a friend to join the fun. However, there’s no online matchmaking, so you’ll need to recruit a friend or family member to join the fun. In Deathloop players use a blend of gun-play and special powers to uncover a sci-fi mystery.

Deathloop is a unique first-person shooter from the creators of Dishonored, placing players in a daily time-loop on a remote island filled with cultists. To stop the loop from resetting every time he dies or the day ends, protagonist Colt Vahn must assassinate eight leaders, called “visionaries”, before the day is over. However, completing the mission also requires uncovering the mystery of how the time loop began.

As an added wrinkle, players can also play online as Julianna, the only visionary who’s aware of Colt’s intentions. Julianna hunts other players as Cole to protect the loop by killing him and restarting the day.

Deathloop offers a unique take on the shooter genre by incorporating rogue-like elements and giving players free rein to uncover the story without a linear path. Metroid Dread brings Samus Aran back to her roots with a fast-paced 2D adventure.

In Metroid Dread, Nintendo’s iconic bounty hunter Samus Aran returns for her first new adventure in more than a decade. Samus explores the mysterious planet ZDR in order to exterminate a parasitic species called the X but quickly finds herself stranded.

The game is heavily inspired by the classic Super Metroid but incorporates much faster movement for platforming and more options for run-and-gun combat. Samus encounters a wide range of alien enemies as well as nearly unstoppable sentry robots designed to hunt her across ZDR.

Like most of Nintendo’s first-party titles, Metroid Dread is perfectly optimized for the Switch, making the most of the console in both docked and portable mode. Ratchet & Clank Rift Apart brings two of the most recognizable PlayStation characters to PS5 for the first time.

Rift Apart is the first Ratchet & Clank title to arrive on the PlayStation 5, and it makes full use of the console’s powerful hardware with ray tracing visuals at 4K resolution and lightning-fast load times.

The single-player adventure gives players control of Ratchet and Clank as well as Rivet and Kit, their counterparts from another dimension. Together, the heroes blast their way through legions of enemies and solve puzzles to repair the dimensional tears that brought them together.

Ratchet & Clank: Rift Apart is approachable for players of all ages and is filled with tons of outrageous customizable weapons and outfits. The game has been repeatedly referred to as a playable Pixar film. Resident Evil Village is the eighth mainline title in the legendary survival horror franchise, with protagonist Ethan Winters returning from his first appearance in Resident Evil 7. Stranded in a remote European village, Ethan encounters werewolf-like monsters, a castle controlled by vampires, and a bizarre ritual that threatens the safety of his family.

Village is the first Resident Evil game on the PlayStation 5 and Xbox Series X, and the second in the series to use an entirely first-person perspective, bringing an added level of immersion to the game’s haunting visuals. Microsoft’s premier racing game brings players to the beautiful landscapes of Mexico, where they can compete in a variety of races and complete exciting stunts, starting with your car airdropping from a cargo plane.

Forza Horizon 5 lets players explore an open world between races where they can find new challenges and earn rewards for discovering the many landmarks scattered across the map. Forza also offers more than 500 unlockable vehicles, all of which can be heavily customized from personal paint jobs to engine tuning.

Forza is one of the best-looking Xbox games to date, it supports cross-buy and cross-save with the PC version, and you can even stream the game with Xbox Game Pass Ultimate. Kena: Bridge of Spirits was designed by a core team of roughly 15 developers at Ember Lab.

Kena: Bridge of Spirits is an indie adventure game made by a small studio called Ember Lab. The game takes cues from classics like The Legend of Zelda, Jak & Daxter, and Spyro the Dragon, providing a blend of combat, puzzle-solving, and platforming.

After five years of development Kena’s mystical village looks absolutely charming, and the game features detailed facial and combat animations. Bridge of Spirits takes about 10 hours to complete and is appropriate for all ages, making it an ideal choice for players who feel fatigued when trying to complete a 30-hour campaign in games like Assassin’s Creed. Halo Infinite is the first addition the popular Xbox franchise in five years.

Halo was once the most popular shooting game around, and Halo Infinite is meant to bring the franchise back to its prime with a totally free multiplayer mode and a new campaign starring Xbox’s flagship character, Master Chief.

After fans responded poorly to early trailers, Microsoft delayed Halo Infinite for more than a year to polish the game for release, and the extra time and care shine through in the impressive visuals and tight gameplay of the finished product.

The classic gunplay and vehicle combat of Halo is augmented by new movement options like sliding and sprinting that have become standards in the genre thanks to games like Apex Legends and Call of Duty. Halo Infinite already includes support for competitive players interested in esports, and the game will continue to add new maps and a multiplayer campaign mode in 2022. The fast-paced gunplay in Returnal makes it a part of the “bullet-hell” genre.

Returnal is a PlayStation 5 exclusive that’s both challenging and captivating. After crash-landing on an alien planet, an astronaut named Selene discovers that each time she dies she returns to the site of the crash. Eventually, she begins to encounter past versions of herself and struggles to regain her memories as she searches for a way to escape the planet.

Returnal is easily one of the most difficult games released this year, but the rogue-like rewards players for improving their skills, and Selene unlocks new abilities as you reach new areas of the planet. Microsoft Flight Simulator lets you travel around the world, offering a stunning reproduction of the entire globe and live weather based on location. The game’s sharp visuals make it one of the most demanding games to play on PC, though it’s well-optimized for Xbox Series S/X consoles too.

While the flying and landing planes at different destinations aren’t immediately exciting to every gamer, the amount of detail packed into Flight Simulator is sure to impress. Players have challenged themselves by flying through real-life storms like Hurricane Ida and pulling off stunts at landmarks like the Bermuda Triangle. Valheim is a Viking survival game that’s still in early access development on PC, but it’s already sold more than eight million copies since its launch in February 2021. While the visuals may look rough on the surface, the game is filled with finely tuned crafting and roleplay mechanics that help players build a unique experience.

Players must explore a massive map and eliminate a series of challenging bosses, but that also requires gathering resources to keep your character sheltered, fed, and equipped for battle. Up to 10 players can play together in a single server and work together, and your character’s abilities will carry over if you join another friend’s world.

Valheim is packed with dozens of hours’ worth of content, especially as players learn to craft boats and broaden their horizons to new continents. While the official release is set for later in 2022, Valheim is one of the most interesting titles available on PC right now.