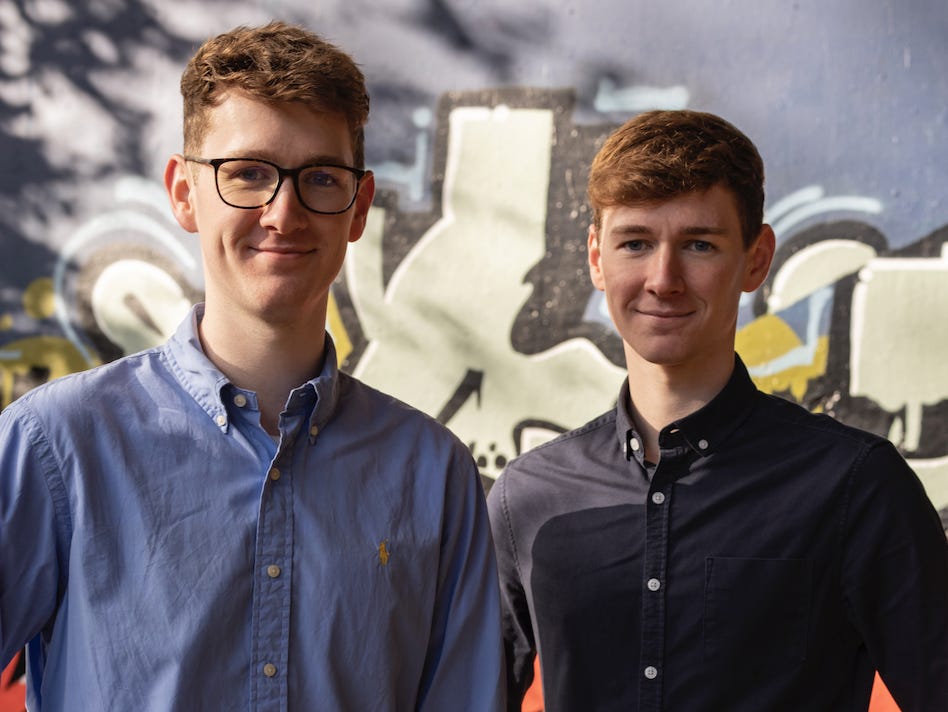 Twins Luke and Owen Buckmaster always hated school and couldn’t wait to leave. When they did, at age 16, they took different paths: Owen got an administrative job at a construction company, while Luke studied professional cookery and worked in a local pub.

Luke, from Windsor, England, became friendly with the pub owner and, when he learned she was struggling to recruit chefs, began helping her research quick and easy ways to serve food without the need for a qualified cook.

He began exploring premade pizza bases but was unimpressed with the UK’s available options, which he said were poor quality and “biscuity almost, like cardboard.”

But when he extended his search to Italy, he discovered that manufacturers were making hand-stretched, stone-baked bases to pizzeria standard. “We thought they were amazing,” Luke told Insider.

All understaffed hospitality businesses had to do was add mozzarella and tomato and put the pizzas in the oven.

The twins had always wanted to run their own business, and now they had their opportunity. They launched Doughboys Pizza together in early 2020, when they were both 20, working with an Italian manufacturer.

Having always been “financially savvy,” the twins had built up substantial savings and were able to put 10,000 pounds each into the company.

But within a month of launching, the pandemic hit, and potential clients, such as pubs and restaurants, were forced to close.

“It stopped us in our tracks,” Luke said.

With no idea how long the pandemic would last, they took jobs in local supermarkets and put the business on hold. They kept the stock they had already shipped over from Italy frozen.

By October 2020, the pandemic was far from over, but they decided to give Doughboys Pizza another go.

With the help of consultants, whom they were able to afford by using some of the money they had initially put into the business, they created a new strategy and identified new areas to tap into.

This included the launch of an at-home “pizza in the post” kit, inspired by the rapid growth of meal-kit firms, such as HelloFresh and Mindful Chef, during lockdown.

At first, the kits were the driving force behind sales. Campaigns featuring foodie micro-influencers — such as @Gemmab.slimming and @The_greedy_ginger — helped spread the word on social media, and the brand now has more than 10,000 Instagram followers.

But as the pandemic eased and hospitality businesses gradually reopened in April, the business-to-business side grew. The pair began by contacting local businesses and others they found on LinkedIn.

“We very much started from scratch and almost went knocking on doors,” Luke said. “It was a lot of cold-calling to a certain degree, a lot of emails out to people. That got the ball rolling.”

Doughboys Pizza now works with about 250 establishments, including the Staycity Group of apartment hotels and a five-star hotel in London’s Chelsea, as well as with pubs, restaurants, and leisure centers.

They work with Bidfood, which has a distribution network of more than 30 depots in the UK, to deliver the product.

Luke attributed this turnover with only two full-time staff members to an efficient e-commerce platform and a system for managing customer data.

The twins plan to move into a new warehouse space in Windsor next month and hire their first two members of staff.

“I would say we’ve definitely had a little bit of luck, as well as obviously a lot of bad luck initially,” Luke said.

The requirement in winter 2020 that all pub customers needed to be served “a substantial meal” — rather than simply visit to drink — worked in their favor.

But otherwise, Luke credited word of mouth about the quality of their product with bringing in customers.

The twins also opted not to tie customers into lengthy contracts. This was a gamble, Luke said, but one he felt had paid off, given that 76% of the B2B clients the company worked with remained clients.

A rebrand in October 2020 — which involved revamping the brand’s logo and look, coming up with a new color scheme, and outlining “tone of voice” brand guidelines — was a big turning point for the company. The pair worked with Fresh Studio to develop the brand’s “young, bold, and engaging” feel, Luke said.

He added that they’d spent about 2,000 pounds on creative branding since the company’s inception, which felt like “a small fortune” at the time. He continued: “I think it was definitely worth that cost. It gave the brand a voice, a personality.”

The twins have taken up different roles, with Owen handling finance and operations and Luke dealing with sales and marketing.

But being 21 can have its drawbacks in the business world. In meetings, customers have commented on their age and said, “You’re younger than my kids,” Luke said.

He added that the business had “so many great loyal customers” that they “must be doing something right.”