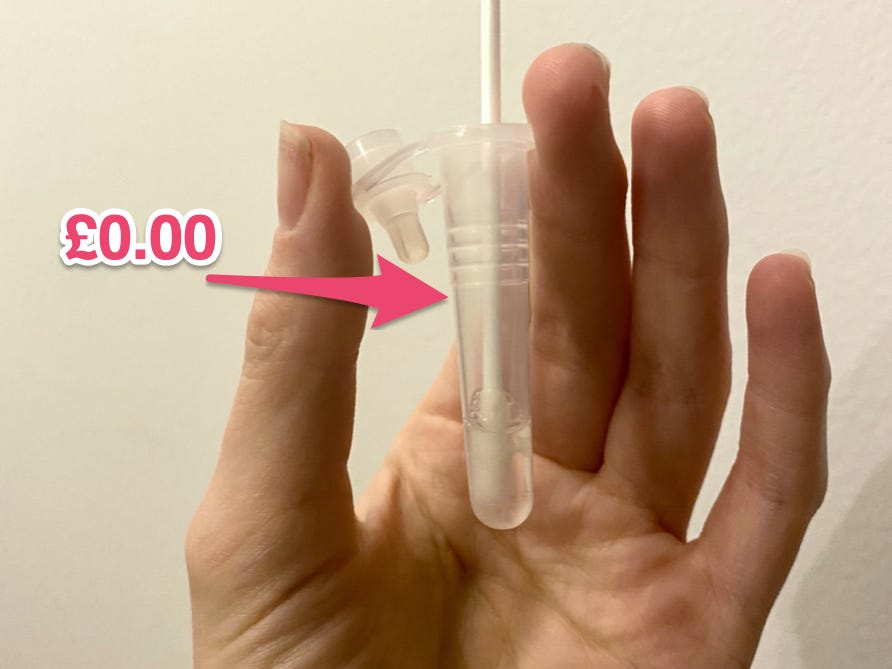 COVID-19 tests have been free for everyone in the UK for nine months.

In the states, where I have lived and worked for seven years, I became eligible for the second shot of my COVID-19 vaccine months earlier than my friends and siblings back home in London, England.

For the US government, vaccination was the way out of the pandemic.

The UK took a different approach. In April 2021, alongside the vaccine rollout, the government launched “Operation Moonshot,” providing everyone in the nation with enough free, at-home COVID-19 rapid tests to test themselves twice a week. The program detected hundreds of thousands of cases, many asymptomatic. Experts say such widespread testing helped identify outbreaks and variants early on, and prepared the healthcare system for spikes in cases.

It’s a strategy the US government is now racing to emulate. This month, the Biden administration will start shipping at-home tests to 50 million Americans, ultimately working up to 500 million. Insurance companies will start covering the cost of pharmacy-bought rapid tests on January 15.

At the same time, the British government is reportedly about to stop providing free tests for asymptomatic people who are not essential workers, having spent £6 billion ($8.2 billion) on testing so far, according to the Times. Nonetheless, the UK’s testing program has been held up as a model for other countries, and provides a glimpse into what Biden’s plan could look like.

How testing has worked in the US so far

Here in the US, testing has not changed much in the last year-and-a-half.

If I want a free COVID-19 rapid or PCR test in New York, I have to go to a local clinic, which at times of high demand, involves an hours-long wait. My results are delivered via email, or, when it’s not so busy, I’m told to wait 10 minutes to get the positive or negative verdict.

Since April 2021, Americans have had the option to buy at-home rapid tests over the counter at pharmacies, but it’s costly — in New York, a pack of two BinaxNOW rapid tests costs me around $20, and an at-home PCR test costs more than $100. On April 9, 2021, the UK government rolled out free at-home rapid tests for everyone across England, including those without symptoms.

Free, home-delivered PCR tests — which are more sensitive and can detect infection earlier — were already available for people with COVID-19 symptoms, or people exposed to COVID-19 and told to isolate. That remains the case.

If you don’t have symptoms, the NHS advises taking a rapid test rather than a PCR test. When you go to order a test on the NHS website, it says to only get a PCR if you have symptoms.

When I was visiting my parents in London late last year, we learned we’d been exposed to COVID-19. We decided to isolate for the next five days and get tested.

I went to the COVID-19 testing page on the NHS (National Health Service) website. The first page gives you two free testing options:

Either test can be home-delivered if you’re not able to leave your home, or picked up at a pharmacy.

As you scroll down, the page gives examples of what counts as a symptom, and recommends getting a rapid test if you’ve been exposed, regardless of how you feel.

“Even if you’re vaccinated, you could still catch the virus or pass it on. Doing rapid tests helps to protect yourself and others,” the website says.

I ordered rapid tests to be home-delivered The NHS website where you can order free rapid tests to be delivered or to pick up.

Since none of us had symptoms, I clicked to order a box of “lateral flow” tests — the common term for rapid tests in the UK. (Lateral flow is the technical term for the technology used in rapid tests to detect viral proteins. Those proteins are called antigens, which is why these tests are also referred to as “antigen tests.”)

This page outlines what a rapid test is, and how to take it, then provides options for getting your tests: home delivery, pick up at a pharmacy, or pick up at a community center.

The website says I can order one box of tests a day. Each box contains seven rapid tests, allowing people to test twice a week within a three-week timeframe.

I clicked on the home delivery option, and was directed to a page on the UK government website to make my order:

Ordering rapid tests in England, you can get a pack of seven tests every day.

I clicked through a series of questions, confirming I had no symptoms (if I did, I would be redirected to order a PCR test), and that I do not work for the NHS. I also had to enter my NHS number, which records all my health information, and my parents’ address. A minute later, I received a confirmation email that my tests were on the way.

While it was seamless for me, many Brits say the process has been harder in recent weeks. Since the highly transmissible Omicron variant emerged, many reported being unable to order rapid tests at all, hitting a page on the NHS website that said there were no delivery slots left, and to try again later.

My box of rapid tests arrived the next day My box of rapid tests arrived a day after I ordered them. The contents of my home-delivered rapid test.

The day after I placed my order, I received a cardboard box containing swabs, testing tubes, and strips, plus waste bags and tube holders.

The instruction manual outlined how to perform my test.

It also explained how to record my result online, and why that’s important for tracking the virus and monitoring cases.

To pick up free rapid tests, use your ‘collect code’ Get a collect code for a free box of rapid tests.

When I was leaving, I wanted to get a fresh box of rapid tests for my parents to have at home. This time, I was able to leave the house, so I ordered tests to pick up at a pharmacy. There is also the option to drop in at churches and community centers, which provide free take-home tests.

Here’s how the pharmacy option works:

Many pharmacies had run out of tests

I went to a few pharmacies, which had signs outside saying not to even ask for tests — a symptom of the COVID-19 test supply running low in the UK in recent weeks. Two pharmacies I went to had signs on the door, asking people not to even ask for tests.

On my third try, I was successful. A pharmacist came outside to ask if I was waiting for a test. She took down my collect code, went inside, and returned with a box of seven tests. Picking up rapid tests from a pharmacy in London, using a collect code.

This week, the UK phased out free PCR tests for asymptomatic people. The move is designed to free up testing for people with symptoms and essential workers who undergo mandatory testing. While the UK has capacity to process 800,000 PCR tests a day, in recent weeks they have almost hit the limit.

There are also rumors that Boris Johnson’s government is planning to end free rapid testing for all, according to a Times article citing an anonymous government source. The Times reported that ministers predict another six years of COVID-19, and as such are considering reserving free tests for frontline workers, such as those in healthcare settings, schools, and public transport. The government has denied those reports.

The rumors sparked pushback, including from Nicola Sturgeon, first minister of Scotland, who said ending the free testing program would be “utterly wrongheaded,” adding in a tweet: “Hard to imagine much that would be less helpful to trying to ‘live with’ Covid.”